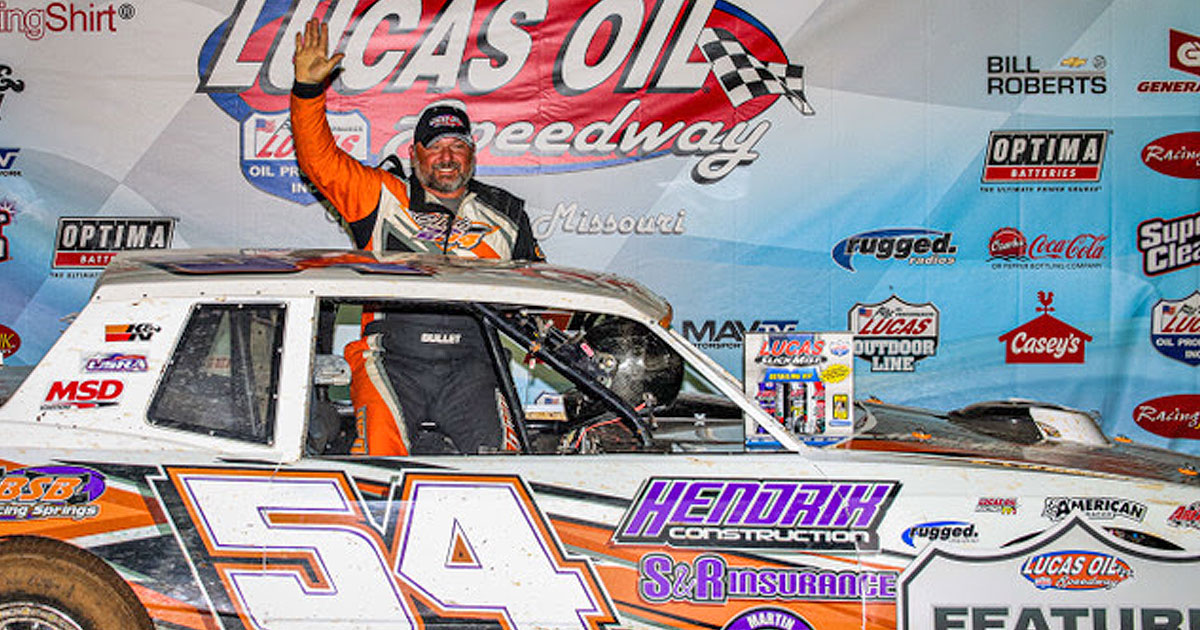 As the green flag waved on the 2021 racing season and the new USRA Stock Car division at Lucas Oil Speedway, David Hendrix had an open mind and few expectations.

A former track champion in the Street Stock class, Hendrix finished third in the opening-night feature and then reeled off three straight O'Reilly Auto Parts Stock Cars feature wins. That propelled the “Buckhorn Bullet” to an early points lead that he never surrendered.

“It was definitely a cool deal,” Hendrix said of becoming the first O’Reilly Auto Parts USRA Stock Cars champion at the speedway. “I really didn’t have many expectations going into the season. They definitely are different than the other cars we were racing with less horsepower and less tires available. It was a little bit of a learning curve.

"I think we were so busy (with work) that we didn’t really realize what was going on. But it definitely was a cool deal.”

Hendrix, out of Waynesville, finished 194 points in front of Robert White in the track points and was an impressive second in USRA national points after scoring nine feature wins overall. Iowa’s Mitch Hovden picked up his eighth USRA national championship.

But beyond the accolades and accomplishments, Hendrix repeated throughout the season the feeling of fun he was having behind the wheel.

“The other class, they were getting so outrageous,” he said of Street Stock expense. “For me, when you line up and sit there waiting to go out onto the race track and you look around… you know this guy beside you doesn’t have a $70,000 race car that we’re trying to out-run. It evens the playing field up and makes the racing better.”

Hendrix’s season could have been even better. After three early victories at Lucas Oil Speedway, his car fought an ignition miss for several weeks, then had a bad trailing-arm bushing go undetected for about a month.

“We had a stretch of 10-12 races where the car just wasn’t doing what we wanted,” Hendrix said. “It cost us some good finishes. We ran up toward the front, but we weren’t near as competitive as when we came out of the gate earlier.

“It’s one of those deals when we look back, could have been closer contending for the national points deal if we didn’t have that stretch of bad luck. But it is what it is. We’re thankful, even to be in the top five.”

While national points weren’t a front-burner priority, Hendrix said running under the USRA sanction was another bonus to the switch to Stock Cars as the Street Stocks didn’t have national points.

The multi-night USRA Nationals, at Lucas Oil Speedway for the first time, also brought a new challenge with 72 Stock Cars among more than 300 overall entries in several divisions.

Hendrix said he missed the Big Buck 50 for Street Stocks, a major event that he nearly won on a couple of different occasions. But the USRA Nationals, with drivers from across America converging on Wheatland for three nights of action, was unforgettable - including a three-wide start to the final-night feature.

“When you get in the front 15 cars of a field like that, they’re all super racers,” Hendrix said. “Everybody, from my experience, when they came down here they raced clean. Everybody is so equal because of the motor rule, it evens the playing field and makes for such good racing. I’m looking forward to next year.”

Hendrix will enter next season in a new car. He recently announced he would be driving an Allen Autosports Stock Car in 2022, built by Urbana’s Scotty Allen.

“Jay Prevete has owned the race cars I’ve driven last five or six years and he has been awesome and we’re still gonna kind of be a teammate with him,” Hendrix said. “Scotty builds excellent race cars. His craftsmanship from what I’ve seen is excellent. He brings a wealth of knowledge to our program.”

Plus, the timing is perfect after a disastrous occurrence. One night after the Summit USRA Nationals, a fire at Hendrix’s shop next to his home—possibly ignited by lightning from a thunderstorm—burned his racing operation to the ground. The race car, which was set to be sold and money put toward the new car, was destroyed along with all but four jack stands.

“It’s been very tough. It makes you want to crawl under a big rock and say the heck with it,” Hendrix said. “Scotty gave me a call and said, ‘Listen, you lost a lot of memories in that shop, but you build new memories and make new memories from here on out.’ That helped a bunch. The deal with Scotty was a blessing that came at a good time.”

Hendrix also gave special thanks to Prevete, who not only is a sponsor and car owner but one of Hendrix’s best friends, for helping him through the ordeal.

“Jay would give me the shirt off his back if I needed it,” Hendrix said of Prevete. “He set up a Go Fund-Me after the fire deal which has helped. We’re waiting on insurance and we’re super busy with work. It’s gonna take us a while to get back to where we were.”

Lucas Oil Speedway recently released its tentative schedule for 2022 with an open Test and Tune set for April 9 and another April 16. The 9th annual MLRA Spring Nationals are set for April 22-23 with the USRA Stock Cars and B-Mods part of the program on night two.

For ticket information for any future event at Lucas Oil Speedway, contact admissions director nichole McMillan at (417) 282-5984 or via email at nichole@lucasoilspeedway.com. Fans also can use the online ticketing system.