Hodges, Minten winners at I-37 Speedway 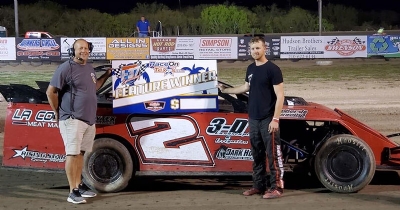 The I-37 speedway in Pleasanton, Texas, held an authorized and innovative event on Saturday, March 28, which featured Sunoco USRA Factory Stocks and USRA Limited Mods. Each car had one driver and one crew member. The show was available on pay-per-view but no fans were permitted to attend.read more

Officials from the Hamilton County Speedway in Webster City, Iowa, announced Thursday that they have been approved by local, county and state representatives to host pracread more

April 2, 2020
Racing's in the blood of USRA Modified veteran Fellers

As one of the veterans of the Ozarks racing scene, Donnie Fellers is a creature of habit. Once the calendar turns to April, that means it's time to go racing. Of cread more

April 2, 2020
How a ‘Tiger King’ star is connected to short track racing

Trenton Berry of RacinDirt TV catches up with USMTS and USRA president Todd Staley to discuss the current COVID-19 situation and do a little bench racing as well. watch video

There is a lot of uncertainty in the world right now with the Covid-19 virus and with many states evoking shelter in place plans. "At Vado Speedway Park, our top read more

Our tech guys are back with an all-new video. We thought it would be fun to share some creative tips and tricks that you probably wouldn't find in any shop manuals. With watch video

With the issues at hand across the world at this time, some restrictions on businesses have been handed down from the government. "I just got off the phone with tread more

KS Engineering has signed on as an Official Sponsor of the Summit USRA Weekly Racing for the 2020 racing season. Residing in Albert Lea, Minnesota, owner Kevin Stoa isread more

March 16, 2020
Super 8 Chanute is Official Host Hotel for Battle at the Bullring

Fans, racers and their families and crew members will rest well with Super 8 by Wyndham in Chanute, Kansas, as the Official Host Hotel at this year’s B-Mod Battle oread more

This coming Saturday, March 14, at 8 p.m., the lid will be lifted on the 2020 racing season at 82 Speedway in Petty, Texas. The ‘Land of the XL’ features a suread more

It was a full night of entertainment Saturday night as I-37 Speedway kicked off its 2020 regular points season on the 1/4-mile, semi-banked dirt oval just south of San Anread more

As many fans in Kansas City and the surrounding area know, thr I-35 Speedway has garnered the admiration of fans and series alike with our commitment to Innovation and faread more