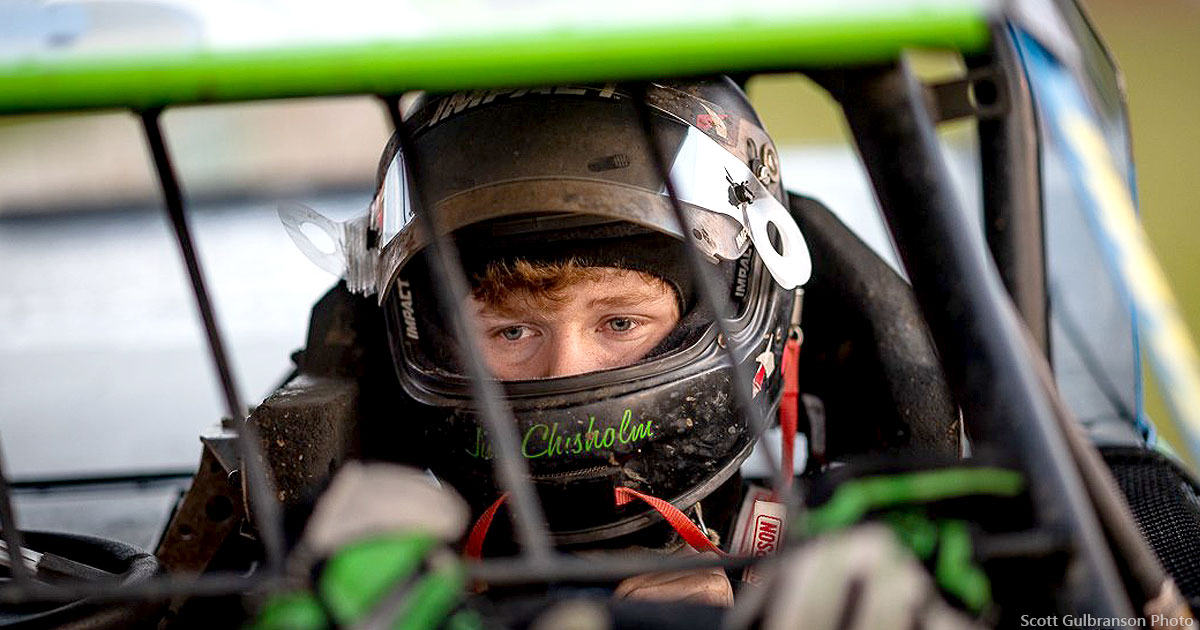 Jim Chisholm pays his first visit to Lucas Oil Speedway this week for the Summit USRA Nationals powered by MyRacePass, seemingly on a path to repeat his USRA B-Mod National Championship.

If the 18-year-old from Osage, Iowa, is feeling any pressure, we’ll never know. Chisholm has been too busy helping work the field on a massive family farm in northeastern Iowa where there are corn and soybean crops to harvest.

And when he’s not out in the fields, or attending classes as a freshman at North Iowa Area Community College in Mason City, he is going over his car thoroughly to prepare for the 8th annual Nationals, which begin on Wednesday night with a test and tune.

“We’re getting busy this time of the year,” Chisholm said of the harvest season, which began last week. He said early indications are for a good harvest, despite some spring freezes and spotty rainfall.

Chisholm’s results on the race track have been more spot-on than spotty. He has 22 feature wins and 36 top-five finishes in 43 events, which has been good enough to build a 96-point lead in the national standings over fellow Iowan Dan Hovden.

“It’s nice that USRA sets it up so you don’t get burned out by racing a whole series and you can go out and race weekly and have a really good time,” Chisholm said. “I sure hope we can make it down for test and tune. I’m first year in college, so getting away is not the easiest thing in the world.

“We have never raced at Lucas Oil before. We’re pretty excited about going down there and seeing the place. We’ve heard wondrous things about the facility before and are super excited to race there.” Chisholm got his start in racing as a six-year-old, after his uncle Mark won a chance to drive a Slingshot which is a 1/5-scale Modified with a roll cage and 40-horse Briggs & Stratton engine. Prior to that, Jim Chisholm said his parents had only attended a few races.

“Without that, we were just a farm family,” he said. “Mark came to my parents—I was just six at the time—and asked them if he bought one of the Slingshots if I could run it two or three weekends that summer. We ended up racing it every weekend that summer and have been racing ever since.

"We fell in love with racing and never looked back.”

Chisholm began racing B-Mods as a 13-year-old. He won his first points race, at Deer Creek Speedway, but said he was far from an instant success story with lots to learn before he emerged as a USRA B-Mod National Champion a year ago.

“At the time we were racing against Cole Queensland,” he said of his early days. “He was the one who really helped us and taught us most of the stuff we know about big cars. Without him, we would have been struggling a lot longer.

“We still struggle with things. It’s not like you know everything. You’re always learning in this sport. You always pick up new information because it’s always changing. Kelly Shryock also has been good to us. He’s helped us a few times.

"All our sponsors, and there’s a lot of them, we wouldn’t be able to do what we like without them. It takes a lot of money to do this, but they make it more manageable.”

Brother Joe, who turned 15 in July, has joined Jim in the B-Mod ranks and won his first feature earlier this year. Just like the farm, racing truly is a family operation with everyone helping out on race nights.

“My brother, my Dad and I work on the cars throughout the week and at the race track it's my girlfriend and one of my sisters and her boyfriend. That's our crew," Chisholm said. "My Mom is always at the race track. She's the one doing tire pressures and making sure we don't forget anything."

Meanwhile, the team looks forward to coming south to Lucas Oil Speedway for the first time. Jim Chisholm said one of the best things about the Summit USRA Nationals is competing against—and getting to know—new competitors from different parts of the country. He cited Kris Jackson of Lebanon, a six-time Lucas Oil Speedway track champ whom he edged for USRA National Championship honors a year ago.

“Just a couple of weeks ago, Jackson and them came up to Deer Creek for the Jamboree and raced against us,” Chisholm said. “Kris is an amazing driver and a great person in general. You can go and talk to him and if you have an issue, he’s the first to help you.

“Last year at Nationals, at Webster City, we met a guy from down south, Tyler Kidwell, and we’ve kept in touch. Races like this, where you meet new people and start new friendships that normally last for a long time, are special.” Due to a huge entry list of more than 300 Summit USRA Weekly Racing Series competitors, starting time has been moved up to 6 p.m. each night. A complete show of qualifying heat races and main events will be held each night. Competitors earn points on Thursday and Friday to help determine lineups for Saturday’s main events.

Lots of off-track activity also is scheduled throughout the week, beginning with Wednesday's Test and Tune. Karaoke with a DJ will be held starting at 10:05 p.m. on the drag boat midway, with a beer tent open. The entertainment and beer tent also will be available following racing on Thursday. On Friday after the races, musician Joe Inman will perform on the drag boat midway.

Some special activities have been scheduled during the day for drivers and crew members, beginning on Thursday morning with a Kickball Tournament. Signup starts at 9 a.m. with a $100 entry fee for 9-10 players per team with room for up to 16 teams. The tournament will be held in the grass area by the pit shack.

On Friday, a Dodgeball Tournament is schedule for 10 a.m. by the pit shack. Sign-up starts at 9 with a $50 entry free for six players per team and a maximum of 16 teams.

A Cornhole Tournament is set for Saturday at 10 a.m. on the midway by the USMTS trailer. Sign-up starts at 9 for a maximum of 64 teams with a $50 entry fee. The top five finishers will be paid.

With 100 bonus points for all competitors in the Summit USRA Weekly Racing Series national points battle, along with the huge car counts and opportunities for deep-field runs, most of the top racers in each of the USRA’s five national divisions will be at the Lucas Oil Speedway blockbuster.

Tickets, for single days and multi-day passes, may be purchased at the gate or online.

If you can't be there in person, RacinDirt has you covered with live coverage of every lap of every race in every division. Check out RacinDirt.TV or download the RacinDirt app for your phone, computer or television. Available on iTunes, AndroidTV, ROKU, fireTV, AppleTV and Google Play Store.

Drivers, click here and get yourself registered for this year's blockbuster Summit USRA Nationals powered by MyRacePass at the Lucas Oil Speedway.

Most camping spots are sold out. Admissions director Nichole McMillan said only primitive dry camping remains, on a first-come, first-served basis for $10 per night, per tent/camper. Those areas are in the timber on the east side of the campground and north of the camp shack located east of Speedway Drive. People will need to check in at the camp shack before dropping campers in the spots they have chosen.

There are a few suites available Thursday and Friday, but as a whole suite holding 18-27 people. Contact McMillan at (417) 282-5984 or via email at nichole@lucasoilspeedway.com for pricing and availability, plus ticket information for any event during the 2021 Lucas Oil Speedway season. Fans also can use the online ticketing system.

Lucas Oil Speedway is located at Highways 83 and 54 in Wheatland, Missouri. A campground with shower and bathroom facilities is also available. With its entrance located just outside the pit gate this sprawling scenic camping facility will continue to enhance the racing experience at the Diamond of Dirt Tracks.

About Lucas Oil Speedway
Lucas Oil Speedway is considered by fans, drivers and industry insiders to be one of the top five racing facilities in the nation. Located in Wheatland, Missouri, approximately an hour from Springfield, and just an hour and a half from the Kansas City metro area, the "Diamond of Dirt Tracks" lives up to its title.

This year marks the ninth season for the liquid quarter-mile drag racing lake, "Lake Lucas." New for 2017 was all-purpose built off-road facility featuring the Lucas Oil Off-Road Racing Series as well as a host of other regional events.