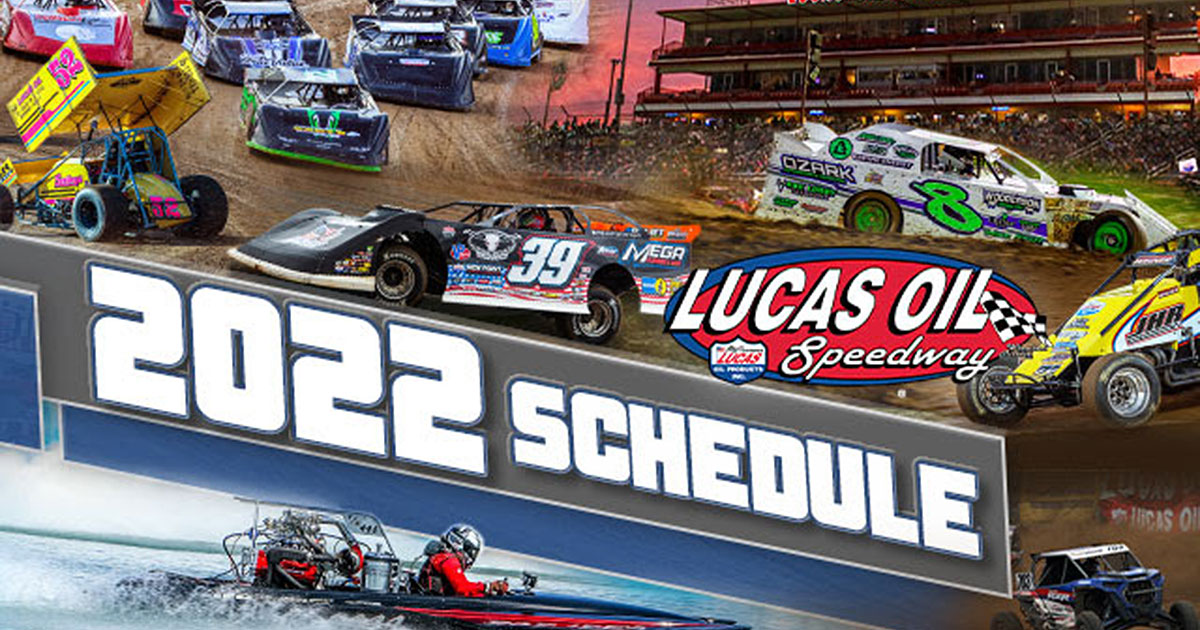 Six nights of the 9th Annual Summit USRA Nationals, the return of the USMTS Modifieds for the 13th Annual Show-Me Shootout and the usual assortment of action on the dirt oval, drag boat track and off-road course highlight the tentative 2022 schedule at the Lucas Oil Speedway.

Speedway General Manager Danny Lorton announced a schedule on Monday that will find the season firing up with an Open Test & Tune on April 16 and the season-opening 9th Annual Lucas Oil MLRA Spring Nationals set for April 22-23.

"We're excited to unveil the schedule so our drivers and fans can begin making their plans for the 2022 season," Lorton said. "As always, we think it's a balanced schedule with a little something for everyone."

The Summit USRA Weekly Racing Series is set to begin on April 30 and conclude with the Rempfer Memorial Season Championship presented by Bill Roberts Chevrolet-Buick on Aug. 27.

Some of the highlights include the 30th Annual Show-Me 100 presented by ProtecttheHarvest.com May 26-28, featuring the Lucas Oil Late Model Dirt Series and Lucas Oil MLRA drivers. the winner of the Saturday night feature will earn a record $50,000. USRA Modifieds will run as the support class all three nights.

After more than 300 cars entered the three-day show this past October, when the Summit USRA Nationals returns to Lucas Oil Speedway for the second time in 2022 it will expand to a six-night show, Oct. 3-8. All current USRA-sanctioned divisions—Modifieds, Stock Cars, B-Mods, Hobby Stocks, Late Models, Tuners, Limited Mods and Factory Stocks—will be in action.

A new twist for the 2022 season is a Wednesday Night Midweek Madness event on July 20. Midwest Mods, Pure Stocks, USRA Tuners and Legends will be the competing divisions.

"This is something new to try this next season to give some classes a chance to race at Lucas Oil Speedway," Lorton said.