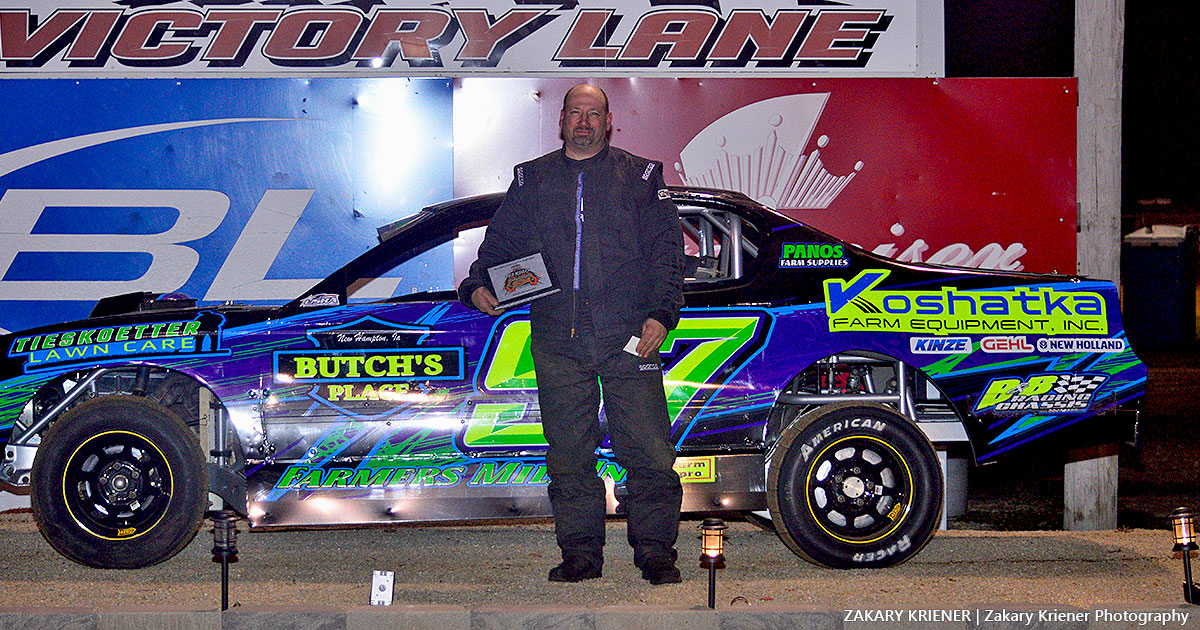 It may have been a chilly evening at Fayette County Speedway in West Union, Iowa, but the action was hot as ever for the 3/8-mile speedway’s season opener Friday night.

In the Medieval USRA Stock Car feature, national power Mitch Hovden of Decorah led the way for the majority of the 20-lap race. With Waukon’s Dan Jones and fellow Decorah driver Kevin Donlan giving chase into the late stages of the race, Jones and Hovden made contact going into turn 3 of the final lap and all three drivers sustained damage that would result in Hovden and Donlan retiring from the race.

Jones was sent to the back—along with Hovden if he would have stayed in the race—allowing Calmar’s Lynn Panos to inherit the race lead and eventual win after the green-white-checkered finish.

The win marked Panos’ first of the season as he admitted he just finished getting his car ready earlier in the day.

Blake Adams of McIntire made a pass on the white flag lap to take second while Brandon Dietrich of Waukon finished third. Jake Lampert of Caledonia, Minnesota, finished fourth and Waterloo’s Dylan Suhr was fifth.

In the USRA B-Mod main event, Decorah driver Dan Hovden got his season started with a decisive feature win in his Rage Chassis. Jerry Lulhoff of Independence finished in the runner-up spot while Postville’s Josh Roney went from tenth to third. Cole Suckow of Cresco finished fourth with Decorah’s Ryan Thorsten rounding out the top five.

Brad Stahl of Castalia led all ten laps of the USRA Tuner feature to get the win with Josh Hills of Elkader taking second. Josh Harms of Postville was third while Timothy Hanson of New Hampton was fourth and Levi Hansmeier of Postville was fifth.