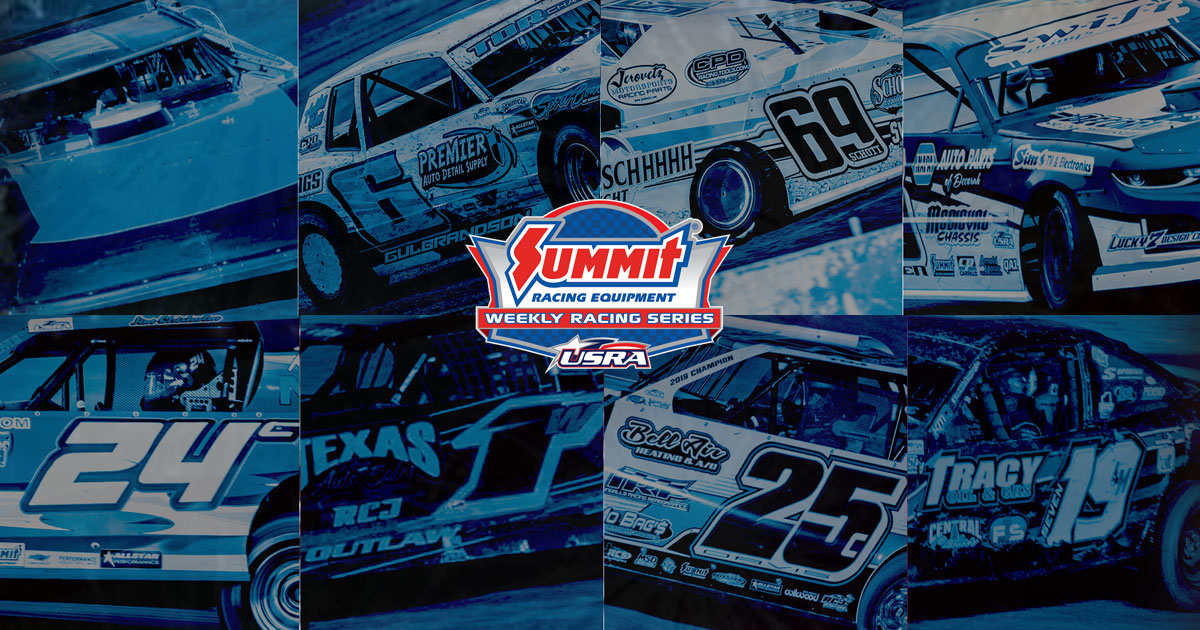 Among them are nine national and regional champions plus 96 track champions. Three are first-time USRA national champs and three earned their second title. One driver claimed his record-setting seventh crown while another nabbed his sixth in the last seven seasons.

Returning to the top of the heap in the USRA Modified division, Lucas Schott of Chatfield, Minnesota, enjoyed a solid season en route to his second Summit USRA Weekly Racing Series national title. His first came in 2016.

Despite being winless at his home track Deer Creek Speedway, Schott scored 15 victories during the 2020 campaign, many times having to travel away from his home state due to government restrictions surrounding COVID-19.

‘Cool Hand Luke’ racked up five wins at the Hamilton County Speedway in Webster City, Iowa—including a victory in the Summit USRA Nationals—and four at the Mississippi Thunder Speedway in Fountain City, Wisconsin.

He was a three-time winner at the Mason City Motor Speedway in Mason City, Iowa, and added four more wins at four different racetracks in four states: Sports Park Raceway in Fort Dodge, Iowa; Longdale Speedway in Longdale, Oklahoma; Monarch Motor Speedway in Wichita Falls, Texas; and a win on November 1 in the season finale at the Humboldt Speedway in Humboldt, Kansas.

The win at Humboldt was a spectacular one as he started the main event on the front row alongside 2015 USRA Modified national champ Jake Gallardo of Las Cruces, New Mexico—his lone challenger for the 2020 title. Schott went on to take the win and pocket $5,000 for his efforts.

It was the second straight USRA Modified crown for a Gopher State racer and the ninth overall for a competitor from the Land of 10,000 Lakes. Decorah, Iowa’s Mitch Hovden garnered an eighth national championship trophy from the USRA after snaring his seventh in the last ten seasons in the American Racer USRA Stock Cars presented by Medieval Chassis.

Hovden, who claimed the last two crowns as well as back-to-back titles in 2015-2016 and 2011-2012, won track championships at the Fayette County Speedway in West Union, Iowa, and his hometown Upper Iowa Speedway.

He scored seven feature wins in ten starts at the Upper Iowa Speedway and five more of his 14 total wins happens at the Fayette County Speedway. He also picked up a Christie Door Company Iron Man Challenge win at the Deer Creek Speedway and topped it off with a win during the Summit USRA Nationals at the Hamilton County Speedway in Webster City, Iowa.

Perhaps the most amazing statistic for Hovden was his 29 top-five finishes in 31 starts. In the last two seasons he has taken the green flag in 71 main events and was one of the first five races to see the checkered flag in all but five of those.

Hovden is the most decorated driver in USRA history with 11 titles in all. Along with his seventh American Racer USRA Stock Car crown, he also captured the Christie Door Company Iron Man Challenge championship in 2020 to go along with his 2013 and 2014 titles. His first USRA national championship came in 2007 in the Mensink Racing Products USRA Hobby Stock class.

The 33-year-old’s effort is worth $2,000 with as much as $1,200 heading his way for his two track championships and even more for his Iron Man title and PBM Performance Products Northern Region. In a class filled with talent and experience from top to bottom and border to border, somehow Jim Chisholm set himself apart as the USRA B-Mod driver to beat at any racetrack on any given night. Overall, he registered 15 wins in 41 starts with 35 top-five and 40 top-ten finishes.

Seven of those wins happened at the Deer Creek Speedway in Spring Valley, Minnesota, where the 17-year-old high school senior from Osage, Iowa, captured his third straight USRA B-Mod track championship. He shared it in 2018 with Kadden Kath.

As part of his dominance at ‘The Creek,’ he also swept both nights of the Featherlite Fall Jamboree. Last year he swept the event when it was a three-day show.

To secure the title over two-time and defending USRA B-Mod national champ Kris Jackson, Chisholm had to hit the road and hit paydirt on Halloween night at the 81 Speedway in Park City, Kansas, where he won the Modster Mash main event over some of the best in the country.

While Chisholm pocketed $2,000 for his first USRA B-Mod national championship, he’ll also be making a deposit from his track championship earning and PBM Performance Products Northern Region, as well as a slew of contingency awards. In addition to his runner-up effort in the Sunoco USRA Factory Stock national points, Tommy Davis Jr. pulled double-duty again this season and claimed the USRA Limited Mod national championship for the second year in a row.

While winning the track championship at the RPM Speedway in Crandall, Texas, for the second straight season as well as the regular season crown at the Devil’s Bowl Speedway in Mesquite, Texas, Davis registered 16 feature wins in 42 starts with 37 of those finishing in the top-five.

The 44-year-old Davis fattened his bank account by $1,500 with his USRA Limited Mod national championship and as much as $1,000 for his dual track championships, plus a lot of valuable contingency awards. In 2019, the Mensink Racing Products USRA Hobby Stock national championship trophy wound up somewhere other than Sioux Falls, South Dakota, for the first time in six years when Eric Stanton snared the title, but it returned to its natural habitat in 2020 after Dustin Gulbrandson’s dominating campaign.

After Stanton snapped Gulbrandson’s string of five straight Hobby Stock titles, Gulbrandson came back with a vengeance and laid down a wire-to-wire performance that netted him a USRA-best 26 victories in 2020. He started 51 races and won just over half of them while finishing in the top-five 46 times and all but once in the top-ten.

Ten of his wins took place at the Rapid Speedway in Rock Rapids, Iowa, and he was a winner nine times at the I-90 Speedway in Hartford, South Dakota. He cruised to the track championship at both venues. He also won three times at the Hamilton County Speedway in Webster City, Iowa; twice at the Sports Park Raceway in Fort Dodge, Iowa; and once each at the Deer Creek Speedway in Spring Valley, Minnesota, and Mississippi Thunder Speedway in Fountain City, Wisconsin.

For his efforts, Gulbrandson garnered $1,500 from the Mensink Racing Products USRA Hobby Stock national points fund and as much as $1,000 for his track championships. For a fourth straight year, a national champion was crowned in the USRA Late Model division, and for the second straight time the honor went to Lucas Peterson.

In his 23 starts, Peterson added 8 top-five and 18 top-ten finishes to his four triumphs.

The 38-year-old will pocket more than $1,000 for his 2020 titles, as well as contingency awards from several generous USRA marketing partners. Walter Hamilton took on all challengers and drove his way to the front when it counted and the 41-year-old from Dallas secured the 2020 Sunoco USRA Factory Stock national championship—his first under the USRA banner.

Hamilton was challenged throughout the season by fellow Texans Tommy Davis Jr., Chris Davis, Nate Dixon and Kyle Blanton—competing head to head with each other on many occasions—but Hamilton sealed the deal on November 6 with a win at the RPM Speedway in Crandall, Texas, during the second night of the Summit USRA Southern Nationals.

In his 47 starts this year, Hamilton recorded 33 top-five and 39 top-ten finishes while snagging 17 checkered flags in the Lone Star State. Eleven of those took place at the Superbowl Speedway in Greenville where he rolled to a track championship against tough competition.

He grabbed two wins at the Devil's Bowl Speedway in Mesquite and one each at the Big O Speedway in Ennis, 82 Speedway in Petty and Monarch Motor Speedway in Wichita Falls. The 2020 Summit USRA Weekly Racing Series campaign was the fourth year for crowning a national champion in the exploding USRA Tuner division and Brian Schoenbaum Jr. took his game to another level throughout the year.

In his 41 starts, Schoenbaum claimed 14 feature wins while scoring 34 top-five and 39 top-ten finishes. Many of his starts came hundreds of miles from his hometown of San Antonio, Texas, as he traveled as far north as Webster City, Iowa, to test his skills against his peers.

With a round trip of nearly nine hours and 600 miles every Friday, Schoenbaum secured the track championship at the RPM Speedway. He traveled to eight different racetracks in total while holding off 2018 USRA Tuner national champ Ryan Bryant. Racers competing in the Summit USRA Weekly Racing Series garnered regional points throughout the season based on their total accumulated track points within each region.

Launched in 2010 as a series for Stock Cars, the USRA B-Mod division was added to the Iron Man Challenge lineup in 2011. Between the two classes, 14 different champions have emerged from 21 title chases.

No new names were added to the list in 2020 as brothers Dan and Mitch Hovden of Decorah, Iowa, emerged as the 2020 Christie Door Company Iron Man Challenge champions. Both are previous series champs.

This was Mitch Hovden’s third title in the American Racer USRA Stock Cars after winning it in 2013 and 2014 also. He garnered three main event wins in 14 starts and seized the points lead from Pat Graham with a late-season charge.

For Dan Hovden, it was his third Iron man hardware in four years after winning it in 2018 and 2017 as well. He finished third in 2019. Consistency paid off for the champ as he need just one victory to go along with his 12 top-five finishes in 17 starts, holding off USRA B-Mod national champ Jim Chisholm by a single point.

USRA Rookie of the Year

In the Modified ranks, 26-year-old Lance Hanson Jr. might have 12 years of racing experience under his belt but was a first-year USRA Modified competitor and eon the Big O Speedway track championship en route to national Rookie of the Year honors. The Palmer, Texas, racer had 20 starts in 2020 with 11 top-five and 19 top-ten finishes. Lance Hanson Jr. lost his sister on January 29, 2019. His car was wrapped to honor her memory during the 2020 season.

While certainly no stranger to the cockpit the 2020 racing season was the first for Doug Keller in the American Racer USRA Stock Car division.

The Easton, Mo., driver compiled 20 wins on his way to grabbing the I-35 Speedway track championship and finished second in national points. Keller, who celebrated his 48th birthday on December 4, had 32 top-five and 37 top-ten results in his 44 starts.

John Ross of Independence, Mo., raced throughout the Show-Me State and garnered the USRA B-Mod Rookie of the Year honors. As a 26-year-old this season, Ross posted 1 top-five and 13 top-ten finishes in 23 starts.

In the Mensink Racing Products USRA Hobby Stocks, Austin Hoeft of Orchard, Iowa, was the top rookie. Hoeft wound up sixth in points at the Upper Iowa Speedway in Decorah, and 13th in the national standings.

The 26-year-old started 38 events and crossed the finish line in the top five on 14 occasions while getting a top-ten finish in 32 main events.

Due to ongoing restrictions related to COVID-19, officials from the United States Racing Association last month were forced to cancel this year’s annual awards banquet.

The pandemic of 2020 caused many families and businesses to achieve their day-to-day objectives through virtual tools such as Zoom meetings and streaming.

The USRA and RacinDirt.com are working to provide a virtual celebration to recognize the drivers, crew members and sponsors who defied the odds and made the 2020 season the biggest ever.

Those drivers and others will be recognized with special highlight videos and live interviews, podcasts and other special features on the USRA website and social medial channels.