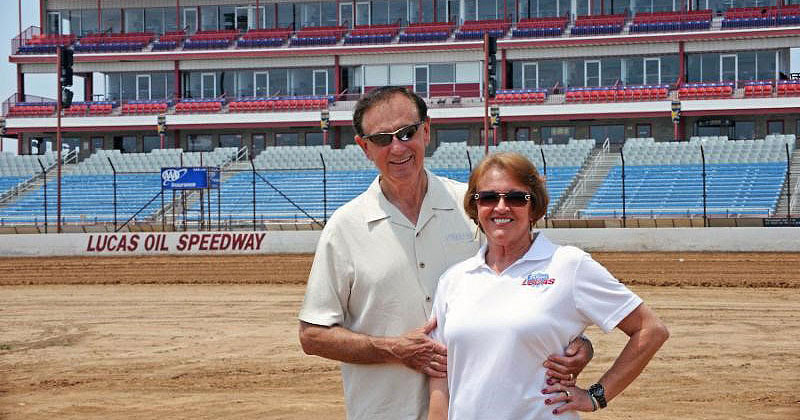 Forrest Lucas, founder of Lucas Oil and Lucas Oil Speedway, is part of a star-studded class set for enshrinement into the Missouri Sports Hall of Fame Class of 2022 which was unveiled on Thursday.

The new inductees will be honored in ceremonies on Sunday, Feb. 6 at the Ozark Empire Fairgrounds in Springfield. Among those joining Lucas in the Hall of Fame Class include former Kansas City Chiefs offensive lineman and Pro Football Hall of Famer Willie Roaf; former St. Louis Cardinals All-Star outfielder Matt Holliday and Miracle on Ice’s Ken Morrow from the 1980 USA Olympic Gold Medal hockey team.

Lucas is a self-made businessman, philanthropist, and creator of Lucas Oil, which he founded with his wife, Charlotte, in 1989. Born in rural Indiana, he is recognized worldwide as a generous supporter of motorsports and the innovative pioneer of problem-solving oils and fuel treatments. Lucas' numerous contributions to the automotive industry and sports nationwide are traceable over decades.

He is a long-time ally of professional and amateur motorsports, sponsoring teams, speedways, and racing events at regional and national levels—even producing a line of high-performance racing oils. Lucas has made significant investments in sports across the Midwest and around the country, from the Lucas Oil Speedway, known as "The Diamond of the Dirt Tracks" in Wheatland, Mo., to high profile sponsorships like Lucas Oil Stadium, home of the Indianapolis Colts.

"Mr. Lucas' office has even asked what kind of memorabilia would you like for the Hall of Fame from Lucas Oil Motorsports, so we're excited about what that might mean for the museum as well," Andrews said. "It appears that (Lucas Oil Speedway) continues to grow and expand and develop even more. That's exciting for our state."

Individual tickets for the Hall of Fame dinner and ceremony are $150. A sponsorship table of 10 is $1,500. Numerous other sponsorships are available, including associate sponsorships, congratulatory ads, a 20-month calendar and baseball card trading set.

Call the Missouri Sports Hall of Fame at (417) 889-3100 to purchase tickets or to inquire about sponsorship information. The Hall of Fame is located at 3861 East Stan Musial Dr. in Springfield, at the entrance to Highland Springs Country Club.

The Missouri Sports Hall of Fame opened in 1994 thanks to Springfield businessman John Q. Hammons. Inside, it has over 4,000 items of sports memorabilia and exhibits. The two-story, 32,000 square foot building also features a number of interactive exhibits and outside the front entrance is the 7,600-pound, all-granite monument dedicated to the Hall of greats honored by the Ozarks Area Racers Foundation.

Lucas Oil Speedway 2022 schedule set: Lucas Oil Speedway recently released its tentative schedule for 2022 with an open Test and Tune set for April 9 and another for April 16, followed by the "Easter Bowl 150" Enduro race on April 16 following that test and tune. The 9th annual MLRA Spring Nationals are set for April 22-23 with the Medieval USRA Stock Cars and USRA B-Mods part of the program on night two. The Summit USRA Weekly Racing Series opener is set for April 30.

For ticket information for any future event at Lucas Oil Speedway, contact admissions director nichole McMillan at (417) 282-5984 or via email at nichole@lucasoilspeedway.com. Fans also can use the online ticketing system.