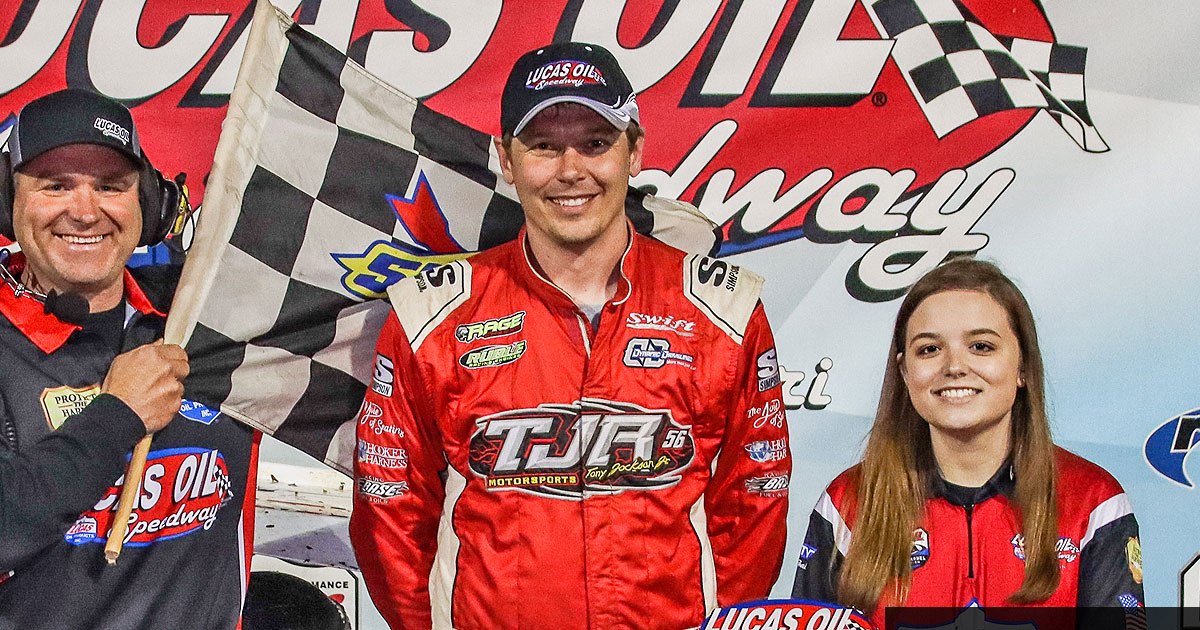 The old saying in sports is that repeating a championship is more difficult than winning a first one. So what exactly does this line of thinking say about Kris Jackson and his six pack of USRA B-Mod championships at Lucas Oil Speedway?

Perhaps more than anything, it means Jackson remains hungry with a commitment to excellence and improvement. Always looking for an edge, the Lebanon racer started his own USRA B-Mod consulting operation a couple of years ago where he offered advice to select drivers around the country in exchange for their consistent feedback.

“I’ve been fortunate enough to get some really good B-Mod racers in that program and that’s helped me become faster,” Jackson said. “They’re racing other places and we’re trying different things on their cars and getting good feedback from them.

“They’re winning lots, too. Not all of them travel quite as much as I do. But we have people winning in Tennessee, Iowa and a lot here in Missouri. It’s pretty neat.”

Jackson earned his record sixth Ozark Golf Cars USRA B-Mod championship at Lucas Oil Speedway in 2021 despite a rough start on opening night (finishing 15th in the feature) and getting caught up in a heat-race incident on Big Adventure RV Weekly Racing Series Rempfer Memorial Championship Night (failing to start the main event).

“It’s a pretty neat deal,” Jackson said of Lucas Oil Speedway title No. 6. “With all the good guys who race there, it’s a pretty good accomplishment. It’s harder to win now than ever before, so it means a lot.

“It took a while for us to get going,” he added, discussing the tough opening night. “Then I don’t have anything positive to say about what happened on the last night.”

But in between, Jackson found that magical “zone” in which many seek but few are able to find.

“Man, it’s so much fun to go racing when it’s like that,” he said. “I know we were good at Wheatland, but it was like that everywhere. We very seldom finished out of the top two. It was really the whole last half of the year - minus that hiccup that last night at Wheatland - it was almost all top-two finishes. We were pretty proud of that.

“We searched out some of the hardest to win races and we went to all of them. We were top two in almost every event. Just pretty neat.”

Jackson piloted a Rage chassis to his third straight title. While it might have remained the safe play to stay with what’s been good to him, Jackson is going to take a big swing for 2022. He and cousin Tony Jackson Jr., have started J2 Motorsports, building their own B-Mod brand chassis with ideas that Kris Jackson has noted the last few years.

He plans to debut the first J2 B-Mod in a few weeks, at the Wild West Shootout in Vado, New Mexico.

“We’ve really only got one car about done right now and hope to practice it Tuesday or Wednesday of this week,” he said. “Then we have five more cars to build for some pretty top-notch racers. I’m really excited because everybody that’s getting one of cars are winning races already.

Jackson said he has nothing but good memories of the Rage, but felt like others had started to close the gap.

“I’ve ran Rage for the last three years. When we got our first Rage, we were pretty dominant for two years,” he said. “This last year, although it was a great year, it wasn’t quite as dominant as it was previously. It’s people catching up. Over the last three years I’ve thought to myself of little things … three or four changes … that’s what we’re doing with this new car, just trying to make it a really good B-Mod.”

As to whether it will lead to a seventh Lucas Oil Speedway crown, Jackson might take himself out of the running by his scheduling. He plans to travel for more big-money shows next season - not that he plans to be a stranger at Wheatland.

“I’m passing up some pretty big-money shows to be at Lucas full time. From the business perspective … financially it’s better to hit more of the big money shows … and when I’m not chasing the bigger money shows, I’ll be at Lucas.”

“It just happens when it happens,” he said of the national championships. “I’ve tried worrying about it and done worse. The two years I won it, I had no intentions of racing for it. You start off racing and having good luck and the next thing you know, you’re up there. It’s not one of those things, at least for me, where I can say, ‘I’m gonna set out to win that this year.’ It takes so many things to go your way.”

Season passes for the 2022 season are available now for those who had them in 2021 at a $25 discount. Contact Admissions Director Nichole McMillan at (417) 282-5984 or email her at nichole@lucasoilspeedway.com for more information.

Meanwhile, Lucas Oil Speedway Gift Cards are available in any dollar amount. Gift Cards can be used in all departments including in the pit office, camp shack, concessions, gift shop, suites and the Diamond Bar.