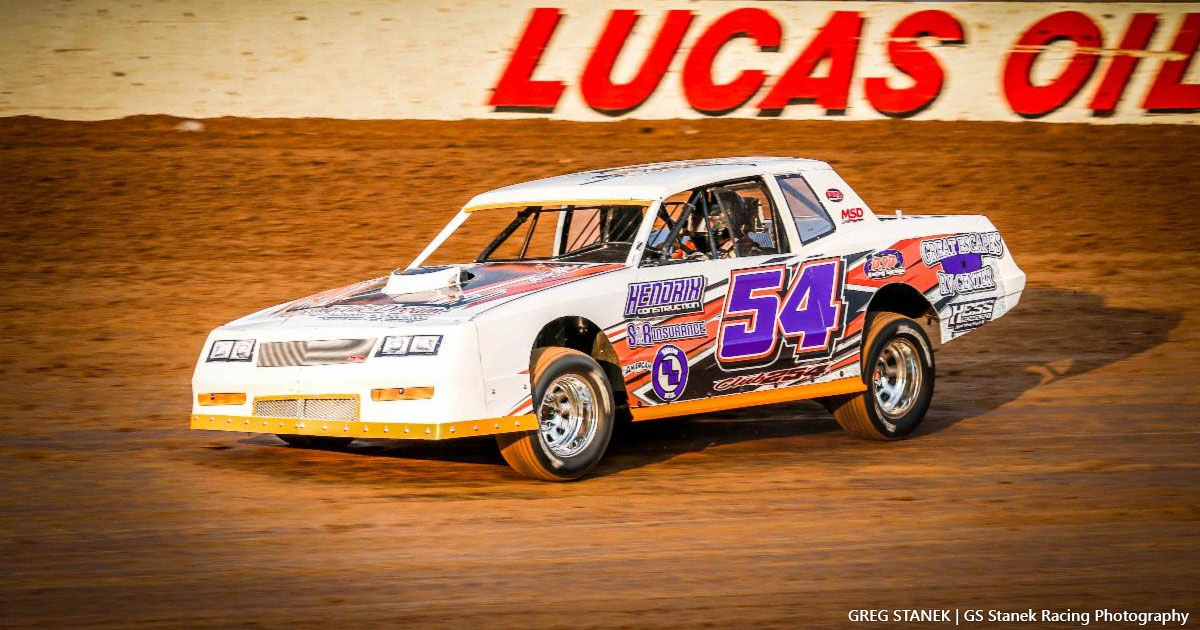 There was some mystery regarding Lucas Oil Speedway’s new Big Adventure Weekly Racing Series class in 2021 and how speedway regulars would accept and adapt to the Medieval USRA Stock Car division.

Two former track champions in the Street Stock class, Wayneville’s David Hendrix and Stoutland’s Derek Brown, have split the first two feature wins. For Hendrix, who holds a slim four-point lead over the Brown in the early championship standings, the O’Reilly Auto Parts USRA Stock Cars have been a refreshing change.

“I’m having a good time and enjoying this Stock Car deal,” Hendrix said this week. “It’s a lot less money wrapped up in the car and that makes it more enjoyable, as far as I’m concerned.

“We have a relatively cheap race car to go out there and have fun in. That’s what it’s supposed to be about.”

Hendrix, a Lucas Oil Speedway track champion in 2014 and again in 2018 when he reeled off six straight feature wins, has adjusted quickly in a car that Jay Prevete purchased from Iowa’s Pat Graham. Hendrix said he bought a motor for $6,500 and, after some initial carburetor issues on opening night, has been strong.

“It took us a little while to figure out the tires. We had to bump the air pressure up to get some of the sidewall flex out of it so I can feel the car underneath me.”

Along with the economics, Hendrix said the USRA Stock Cars gobble up a lot less time to get race-ready during the week. That’s huge for him because of his busy schedule, running his own business, Hendrix Construction.

After winning the 2018 championship, the “Buckhorn Bullet” was simply too busy to race anything close to a regular schedule. He estimated that he entered five races over the next two years.

“We just didn’t have any time,” Hendrix said. “My Dad (Eugene) has worked for me the last five or six years. I’m trying to let him retire. I have a pretty good crew now and that takes some pressure off Dad and I as far as the work load we’ve had. Dad has been hanging around the shop and has been able to tinker with the race car these last three or four months more than he has the last five years. So it’s kind of nice.”

The addition of new faces also has made for fun competition on the track. There are several drivers making the weekly pull to Lucas Oil Speedway for the first time in 2021 in the USRA Stock Car division. Just 20 points separate the top five in points.

“I’m enjoying it. I just hope the car count keeps increasing. I think some of the guys, once they get over the initial shock of switching, if they keep an open mind and try it, they’ll have a lot of fun with the class. In my opinion, I think it’s what Stock Car racing is supposed to be.”

The economics advantage of the USRA Stock Car also could mean another generation of the Hendrix family getting into the sport, at some point.

“A big point for me is I have a 13-year-old son and he’s acting a little interested in racing,” Hendrix said. “If he decides he wants to race, I can afford to put him in one of these cars.”

Two-Seater Raffle: During Saturday night's program, raffle tickets will be sold on the midway for a chance to win a five-lap ride in the Lucas Oil Speedway 2-Seater Late Model, driven by track General Manager Danny Lorton, during intermission.

Raffle tickets will be sold throughout the evening with the winning ticket drawn just prior to intermission. Tickets will be sold for $2 each, six for $10 or 12 for $20. Fans must be 18 years of age or older to participate and sign a waiver form.

They will get to meet some of the drivers, see the cars up close and attend the drivers' meeting prior to return to the midway. Each of the eight will receive a Frogs Jr Fan Club T-Shirt, checkered flag and a gift bag sponsored by RaceGear Unlimited to put items in they receive from the drivers.

Suite deal available: Fans can take in Saturday's action from a VIP Suite on the third level overlooking the front straightaway, as a limited number of individual tickets are available priced at $24 apiece. All VIP Suite seats must be pre-paid and can be reserved by calling Admissions Director Nichole McMillan at (417) 282-5984.

For ticket information for any event during the 2021 Lucas Oil Speedway season, contact McMillan at (417) 282-5984 or via email at Nichole@lucasoilspeedway.com. Fans also can use the online ticketing systemhttps://www.stubwire.com/venue/lucasoilspeedway/wheatland/3667/.