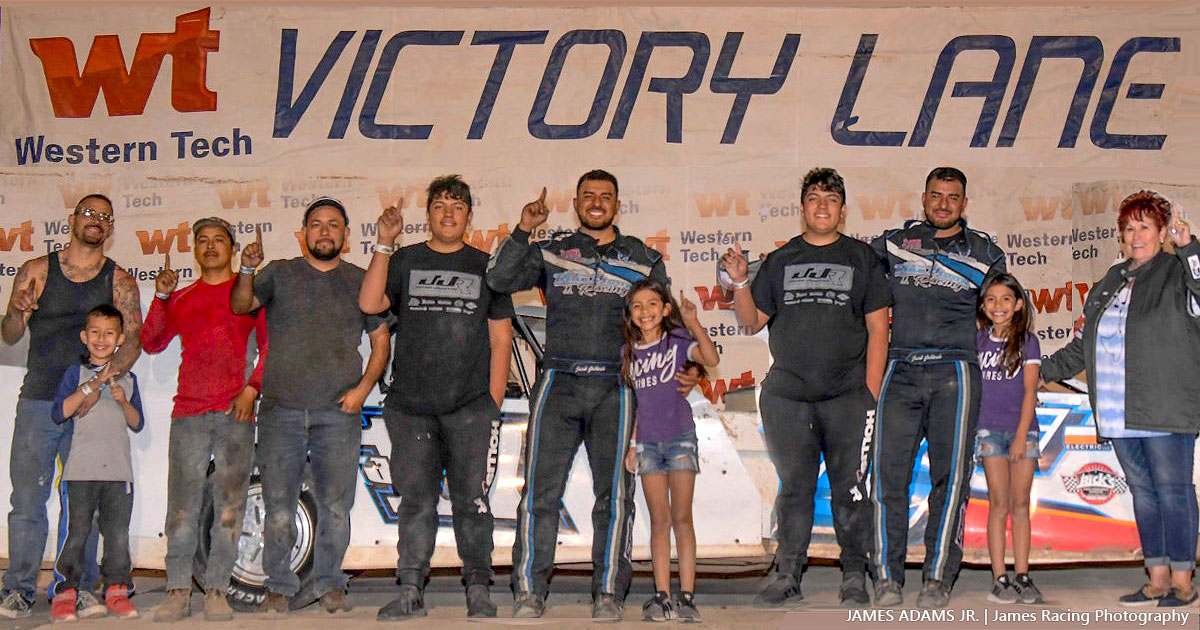 El Paso Night at the Vado Speedway Park was held under 80 degrees and sunny skies with 97 competitors on hand for the five-division program.

Sergio Chao and Daniel Lozoya paced the USRA B-Mod feature field to the green, but the event was an all-Gallardo feature as 10th-starting Jake Gallardo, who was looking for his fourth feature win in a row, and his father, 20th-starting Fito Gallardo, quickly raced to the front of the field and began to duke it out for the race lead.

Greg Gorham, Jesse Haynie and Lucas Ward were racing hard inside the top five for the first half of the race, but the B-Mods had their share of caution flags which shifted the top five after Ward, Sherman Barnett and John Carney were involved in a crash.

Jake Gallardo kept pace out front and led the field to the checkered for his fourth consecutive feature win with Fito Gallardo crossing the finish line in second.

The Medieval USRA Stock Car event was another caution-plagued event, but also saw many drivers work from deep in the field to record top five finishes.

Michael Zimmerman and Xander Parra sat on the front row and led the field to green before 11th-starting Jason Josselyn charged from the tail after an early spin and pit stop to the lead and began to drive away out front.

Twelfth-starting Bryan Bennett followed Josselyn through the field and raced to the runner-up spot, and as laps wound down he began to pressure Josselyn for first place.

Josselyn slipped up in turn one and spun his No. 74, bringing out the caution late in the race and handing the lead to Bennett, which he was able to hold onto for his first win of the 2021 season.

The final event of the night saw 22 USRA Modified racers take to the track for their 25-lap nightly finale.

Tom Georges and Ricardo Olague Jr. made up the all-El Paso front row and Georges was able to lead the field into the first set of turns when the initial green flag flew.

It didn’t take long for third-starting Jake Gallardo to race from row two into the top spot and begin to drive away in his No. J17.

Once he got out front he took off while Bumper Jones, who was gunning for four straight wins, quickly raced into second and set his sights on Gallardo out front.

Carlos Ahumada Jr., Fito Gallardo and Royal Jones were in a great battle inside the top five for a handful of laps before Fito Gallardo snuck by and joined the battled for second with Bumper Jones.

Fito Gallardo was able to work his No. G17 well on the bottom of the speedway and overhaul Bumper Jones for second and begin his pursuit of his son out front.

Jake Gallardo was solid with the lead though and raced to Western Tech Victory Lane for the first time in his USRA Modified this season with Fito Gallardo crossing the line second.

The Vado Speedway Park will be back in action Saturday, May 1, with another Hot City Nights event featuring $5 admission for fans who have a valid ID from Anthony or Chaparral. Pits open at 4 p.m. with the grandstands opening at 5.