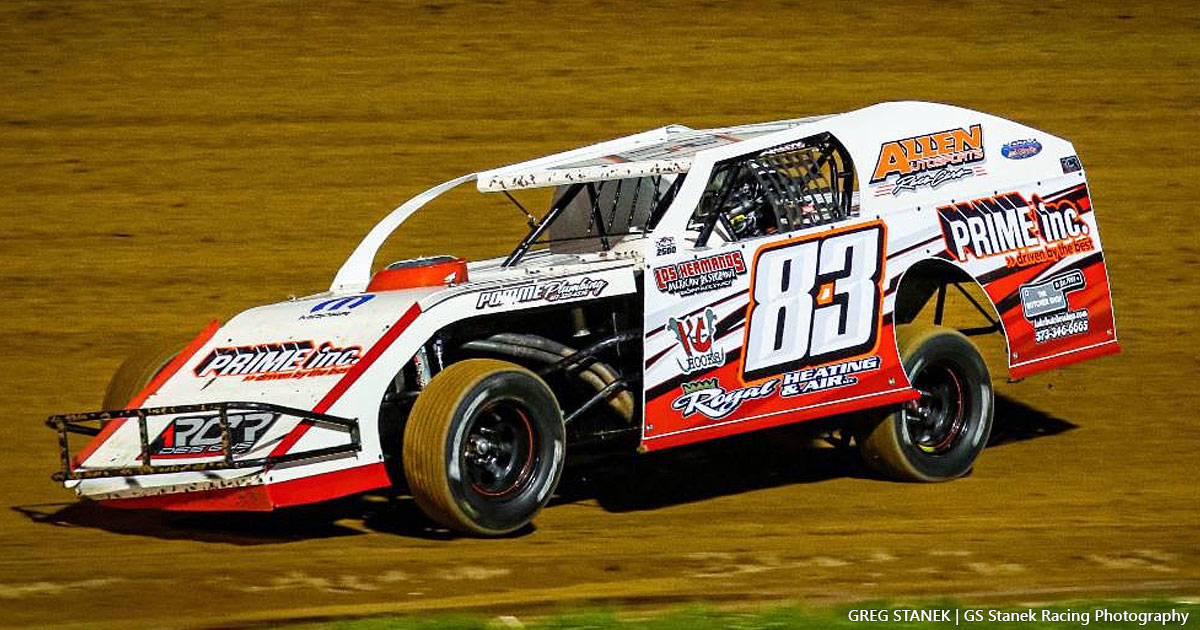 Coming off a 2020 season in which he came up just short of victory lane numerous times, J.C. Newell wasted little time enjoying the spoils of first place on opening night of the Big Adventure RV Weekly Racing Series at Lucas Oil Speedway.

“I kind of had a feeling something was gonna happen,” Newell said of the battle playing out in front of him. “I was trying pretty hard to stay in third and put ourselves in position. It worked out for us.”

For the 24-year-old from Buffalo, who’s won dozens of races over the years on dirt and pavement, it marked his first-ever feature win at Lucas Oil Speedway.

“It meant a lot. It’s something we’ve been trying for the last three or four years now,” Newell said of winning at Wheatland. “To finally have that off our list really feels good.”

It also was his first win on the dirt, period, in a couple of years after seven second-place finishes last season at the Dallas County Speedway in Urbana and four top-fives in his first full season running at Lucas Oil Speedway.

Newell goes for another one this Saturday night when the USRA B-mods are the headliner of $uper $aver $pecial Night at Lucas Oil Speedway, chasing $750 to win a 25-lap main event courtesy of Clearlight Inn. Fans arriving before 5:30 p.m. will receive four admissions, four hot dogs and four 20-ounce Coca-Cola products for just $30.

Newell wound up fifth in Ozark Golf Cars USRA B-Mod points last season at Lucas Oil Speedway. With a year of running weekly at the track under his belt, plus being a part of the new Allen Autosports “alliance,” he feels better prepared to win this year.

Newell is in a new modified designed and built by his father-in-law, Scotty Allen. At least four other drivers are driving Allen B-Mods as well, including veterans J.C. Morton and Eric Turner, with the intent of sharing information to make all the more competitive in the highly competitive division.

“We learned a lot getting to run there a full season last year,” Newell said. “We have some really good teammates this year that are working with us and they really helped us a ton.

“It’s huge,” he added, of the veteran teammates. “They’ve been great to work with and a lot of fun. I’ looking forward to the rest of the summer with them.” Newell is one of the more-acclaimed young short-track racers in the Ozarks. The Stoutland native and third-generation racer was a track and state champion as a 19-year-old on the pavement at the Lebanon I-44 Speedway. He won five Pro Late Model features that season and often traveled out of state to find big races to compete in.

A desire to remain closer to home led him back down a dirt-racing path, where he once won 17 times in 28 attempts before moving to pavement and now B-Mods.

“We really had a good notebook from the last two years with the old car and Scotty designed this new one. Working together with the other teams, I really feel we’re on a good track,” Newell said. “We hope to just keep winning some more races. It would be neat to try and win a championship over at Lucas, but we don’t want to set our hopes too high yet.

“You know when you pull in every week there’s 10-15 B-Mods that could win any night, just being up front and running with those guys is saying something.”

Newell’s dad, Ben, still runs a Midwest Mod at Dallas County Speedway and could hit some of the B-Mod events at Lucas later this year. Ben was named as an inductee for the Ozarks Area Racer Foundation Hall of Fame and will be inducted next January. “Big” J.C. Newell—Ben’s dad and J.C.’s grandfather—was an Ozarks Racers Hall of Famer in the mid-2000s.

Get a suite view: Fans can take in Saturday's action from a VIP Suite on the third level overlooking the front straightaway, as individual tickets are available price at $24. All VIP suite seats must be pre-paid and can be reserved by calling Admissions Director Nichole McMillan at (417) 282-5984.

They will get to meet some of the drivers, see the cars up close and attend the drivers' meeting prior to return to the midway. Each of the eight will receive a Frogs Jr Fan Club T-Shirt, checkered flag and a gift bag sponsored by RaceGear Unlimited to put items in they receive from the drivers.

Lucas Oil Speedway is located at Highways 83 and 54 in Wheatland, Missouri. A campground with shower and bathroom facilities is also available. With its entrance located just outside the pit gate this sprawling scenic camping facility will continue to enhance the racing experience at the Diamond of Dirt Tracks. For more information call the track hotline at (417) 282-5984.