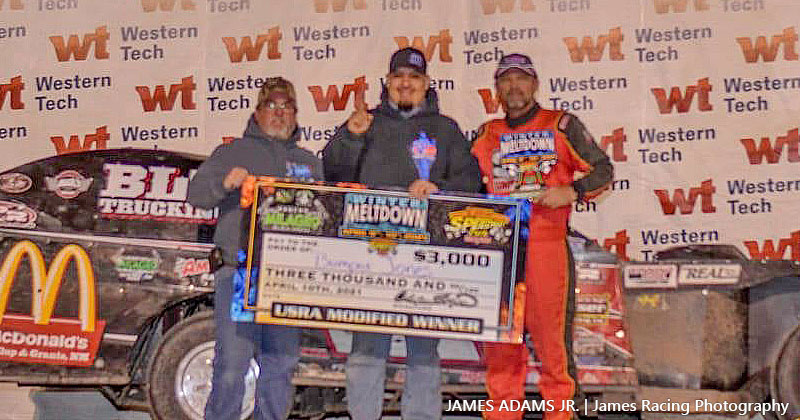 The second night of the return of the Winter Meltdown was held at the Vado Speedway Park in Vado, N.M., on Saturday, April 10, with a stout field of competitors in each of the Summit USRA Weekly Racing Series divisions in action.

The USRA B-Mods were up with a pair of veteran racers sharing row one. Sherman Barnett and Dickie Gorham led the field to the green and Barnett quickly slid into the top spot while Mike Rosales and Greg Gorham applied pressure.

A great four-car battle ensued over the first few laps until eighth-starting Jake Gallardo rolled around the outside and stole the lead and began to drive off from the field.

Fito Gallardo, who started seventh, worked his way into the top three early as well and tried to chase down Jake out front, but his son Jake was just too strong, outlasting the field and racing to his second straight USRA B-Mod victory.

Fito ran second with Rosales crossing the line in third ahead of ninth-starting Rob Moseley and Greg Gorham. Shane McNutt led the Medieval USRA Stock Car feature field to green from his pole position and took command on the opening lap until third-starting Jason Josselyn slipped by into top spot in the early laps of the scheduled 20-lap event. Once Josselyn got out front he used the bottom groove to perfection and held the lead for the majority of the caution-plagued event.

Bryan Bennett, Cameron Martin and Gary Kerr Jr. applied early pressure but Josselyn was up to the task out front. The time limit was reached after a lengthy event, so the event was shortened to a green-white-checkered situation on lap 14, but the field didn’t even make it back to the white flag as Martin and Josselyn made heavy contact in turn three, sending the field scattering and ending the race.

The race was deemed official on the last complete lap, which gave the victory to Josselyn. Bennett was credited with second, followed by Kerr, 13th-starting Justin Thornton and 11th-starting Fred Gibson. The final event of the night saw brothers Nathan Smith and Mark Smith lead the USRA Modified field to the green in their 35-lap, $3,000-to-win Winter Meltdown finale. Mark Smith jumped to the lead early, while fourth-starting Bumper Jones, who was looking to sweep the weekend, quickly raced to the inside of Nathan Smith into the second spot and began to pressure Mark Smith for the lead.

Jones, Austin Adams and Fito Gallardo were all in the top five at the onset of the event, but Jones was a man on a mission and worked to the outside of Mark Smith into the lead and never looked back once he took command of the top spot.

The track was lightning fast and Jones was masterful in lapped traffic, negotiating the slower cars while sixth-starting Johnny Scott raced his way into the runner-up spot before the mid-point of the race and tried to stay withing striking distance of Jones out front.

Jones and Scott ran one-two for the remainder of the race with Gallardo third, Mark Smith fourth and Royal Jones fifth when a lap-30 caution flew bunching up the field for a five-lap dash to the checkered. On the restart, Bumper Jones was on the gas early and kept Scott at bay to complete the $5,000 weekend sweep while Royal Jones slid under Gallardo to take the third position, which he held to the checkered. Gallardo crossed the line fourth just ahead of 14th-starting Carlos Ahumada Jr.

For fans not able to attend in person, all events held during the 2021 season at the Vado Speedway Park will also be live streamed online by PayPerView at watchfye.tv.