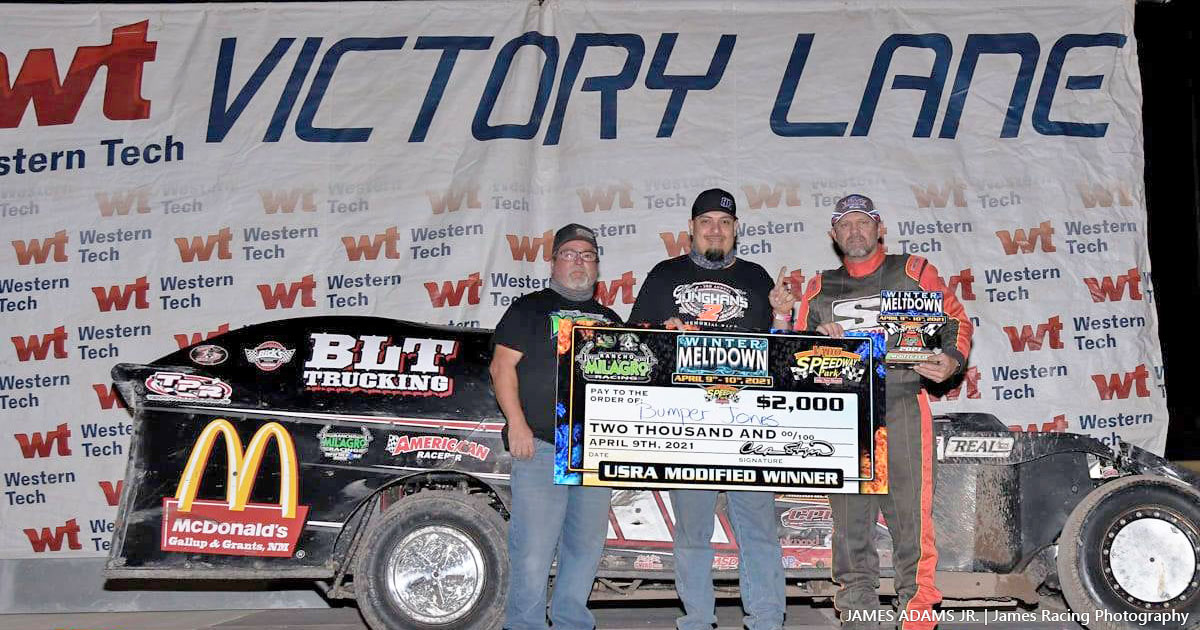 The first special event of the 2021 season at the Vado Speedway Park kicked off Friday, April 9, with opening night of the return of the Winter Meltdown—a USRA Modified event traditionally held in March but pushed to April due to COVID-19 shutdowns in New Mexico last month.

The event, which started in 1995, was removed from the track’s schedule in 2016, and after a four-year hiatus returned with a thrilling event to cap off a great night of racing action.

USRA B-Mod opening night winner Rob Moseley and Hector Barraza paced the field to the green flag for their 20-lap main event. Moseley hopped into the top spot and began to drive away into the lead with Mingo Jauregui and Christy Barnett giving chase.

As Moseley drove off out front, 19th-starting Jake Gallardo, in a Hansen-owned No. 18G, began his charge from the tail after pitting for a flat tire. As Moseley ran off in the led, all eyes were on Gallardo as he was charging around the cushion toward the front and appeared in the top five with five laps to go.

Gallardo continued his charge toward the front and was able to complete his worst-to-first run and slipped by Moseley into the lead on the final lap and raced off to the win. Moseley ran second with 15th-starting Fito Gallardo third, Barnett fourth and Jauregui rounding out the top five. Jason Josselyn and Bryan Bennett sat on the front row for the night’s $500-to-win Medieval USRA Stock Car feature event. Josselyn took command at the start and began to drive around out front with third-starting Leslie Gill in tow.

Gill began to put pressure on Josselyn for the top spot as laps clipped off with Bennett and Jed Smith working to make it a four-car battle out front. Seventh-starting Gary Kerr Jr. began to make his way toward the top five as well.

Josselyn and Gill began to engage in a close contact battle for the lead with Gill able to slip under Josselyn for the lead, only to have Josselyn race back by into the top spot a lap later.

Several caution flags kept the field close and allowed Kerr to move in to the battle out front as well. The complexion of the event changed dramatically when Kerr got into the left rear of Josselyn while battling for the lead out of turn four and Josselyn suffered a flat tire, ending his bid for the win.

On the restart, Kerr was able to hold off Gill, Bennett and 18th-starting Cameron Martin for his first win at Vado Speedway Park. The final event of the night lived up to the billing as 24 of the best USRA Modified drivers in the Southwest took the track for their 30-lap, $2,000-to-win main event.

Nathan Smith and Jake Gallardo paced the field to the green flag and quickly began to do battle up front for the top spot. Third-starting Bumper Jones quickly joined the mix and a wild three-car battle out front ensured.

Gallardo snatched the lead from Smith early, only to have Jones steal it away several laps later and begin to put distance between himself and the field. Meanwhile, eighth-starting Johnny Scott, Carlos Ahumada Jr. and Philip Houston were in a great three-car battle for third, fourth and fifth.

Jones continued to drive off uncontested out front while Scott was working his way through the field and appeared in third with just under 10 circuits to go. A lap-25 caution bunched the field and made for an epic final few circuits as Jones hugged the tires and Scott let it all hang out on the cushion trying to make a bid for the top spot.

As the field came to the while flag, Scott pulled alongside Jones for the lead and the duo drag raced wheel to wheel down the backstretch for the final time. Jones had the upper hand and moved to the top to protect his lead as he charged to the checkered and held off Scott by a half-car-length for the big payday.

The Vado Speedway Park will be back in action tonight with the second night of Winter Meltdown weekend. A top prize of $3,000 is on the line for the USRA Modifieds with USRA B-Mods, Medieval Stock Cars and Legends also in action. Pits open at 4 p.m. with the grandstand opening at 5.