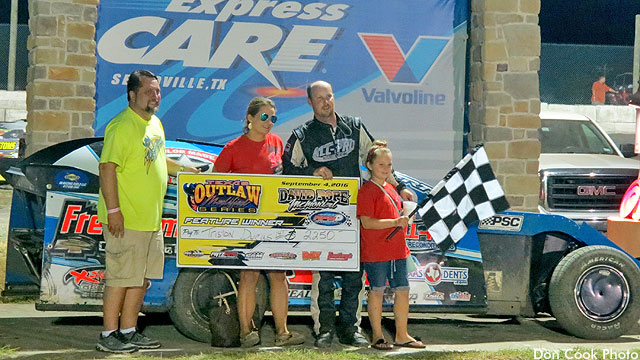 CRANDALL, Texas—The annual David Pope Memorial was held at the RPM Speedway in Crandall, Texas, Sunday night. A large crowd was on hand and over 150 race cars competed in four different classes.

The featured class was the Texas Outlaw Modified Series (TOMS). A good field of 42 USRA Modifieds were in the pits.

In the 30-lap, $2,250-to-win feature, 24 cars started. Points leader Triston Dycus worked his way to the front and held off the field to take the feature win. Mike Dillard had a good run for second, Hard charger Chase Allen was third, Phillip Houston ended up fourth and Colby Smith was fifth.

Special thanks to Joy Pope and the Pope family on working with you for this show in memory of a special man. Look forward to bigger and better things. Special thanks to the Edwards family and all of the RPM Speedway staff from the TOMS to be part of this event.

The next Texas Outlaw Modified Series (TOMS) race is at the 85 Speedway in Ennis, Texas, Sept. 10. For more information, go to www.texasmods.com.