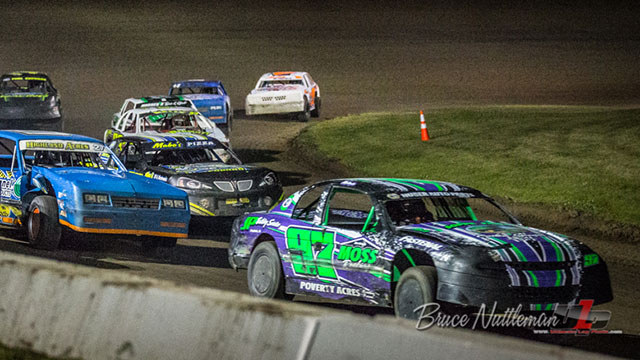 A wild 20-lap main event that saw drivers jockeying for positions throughout the tightly-bunched field ended with Lynn Panos holding off last year’s series champ Mitch Hovden for his first Iron Man victory of the 2014 campaign.

Tom Schmitt, who added an Iron Man title to his résumé in 2012 to go along with his pair of USRA Stock Car national championships, took the lead at the onset from the outside of the front row from polesitter Andy Altenburg.

While Schmitt settled in to a rhythm up front, the action was intense behind the leader with drivers challenging the high-banked clay oval three and, sometimes, four wide.

USMTS boss Todd Staley started tenth but found himself in second and chasing Schmitt near the halfway point of the race. After a quick caution, contact with another car left Staley’s left rear tire flat and his chance at his first USRA Stock Car win evaporated.

Shortly thereafter, Panos came charging to the front. He snuck by Schmitt with five laps to go and then cruised the rest of the way to the finish line to pocket the $750 top prize.

The Iron Man Challenge will be back in action on Friday with the USRA B-Mods taking center stage along with the co-sanctioned USMTS/USRA Modifieds as part of night #2 of the 4th Annual World Modified Dirt Track Championship presented by Red Tail Tackle.

Both USRA Stock Cars and USRA B-Mods will be at the Fayette County Speedway in West Union, Iowa, on Wednesday, July 30.

Showing finishing position, starting position in parentheses, car number, driver, hometown and money won. All drivers advanced to the “A” Main with the top 8 in heat race passing points redrawing for starting positions 1-8.