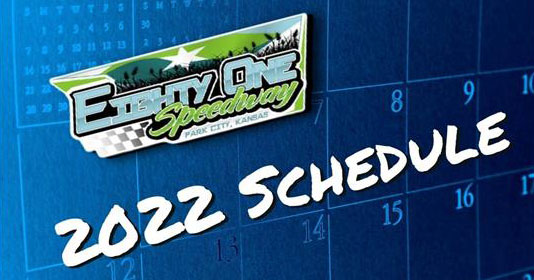 The highly anticipated release of the 2022 schedule for 81 Speedway features a stacked special event line up with a healthy dose of Summit USRA Weekly Racing Series action to boot. Diversity was the key word when John Allen and team went to work building next season's lineup.

The 11th running of the traditional USMTS Keeper of the Plains Shootout event returns on Thursday night, August 4. The event will be headlined by the open-wheel outlaws of the Summit USMTS National Championship fueled by Casey's for South Central Kansas supremacy. USRA B-Mods are also on the card.

The end of October features two of the biggest race weekends ever paired up to end a season at 81 Speedway.

The World of Outlaws Late Model Series invades the facility for the first time since 2017 on Saturday, October 22, with USRA Modifieds and USRA B-Mods also in action. One week later, the 3rd Annual Modified Spook-tacular once again crowns a USMTS national champion here in Park City, Kansas.

The mighty USRA Modifieds headline the season with 22 total races on tap while USRA B-Mods will hit the race track 15 times. Of note, each weekly division will be featured in a "special" at least once throughout the year.