Ortega in photo finish over Jones at Vado Speedway Park 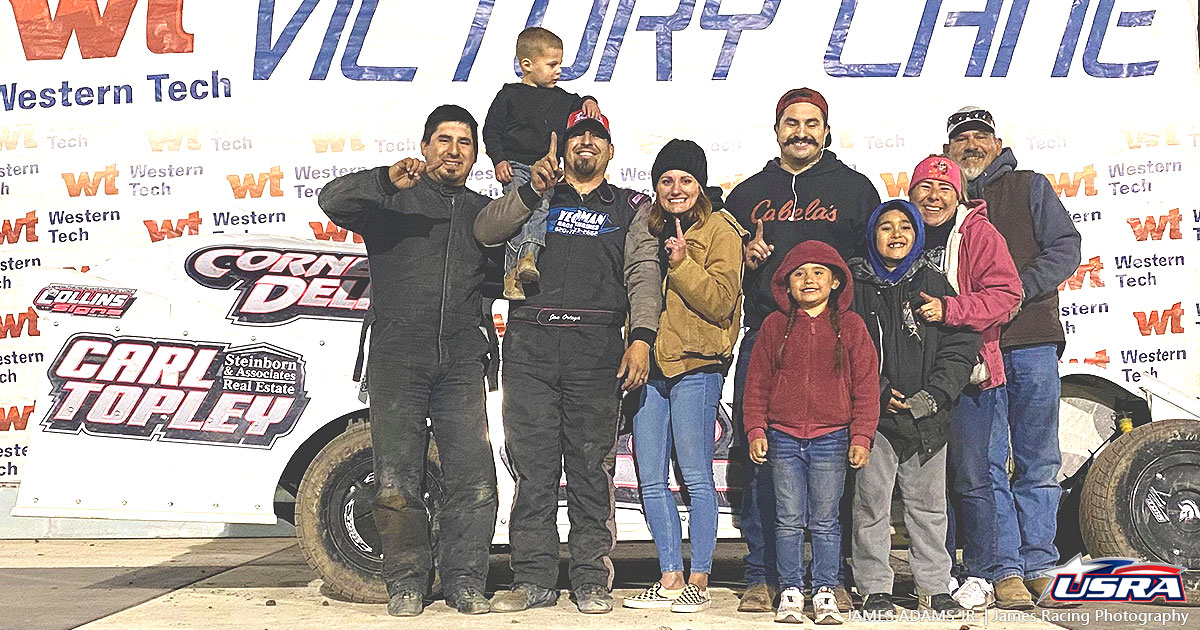 The second event of the 2021 season at the state-of-the-art Vado Speedway Park was held on a chilly evening March 27 with a five-division program on tap. Ninety-nine competitors were on hand for the Saturday night event.

After qualifying races were complete, the USRA B-Mod main event was the first feature of the night, and saw sixth-starting Mingo Jauregui quickly storm to the lead early in the 20-lapper and proceed to run out front uncontested for his first victory of the 2021 racing season.

Jauregui was the class of the field as he raced comfortably out front for the majority of the race, while 8th starting Dustin Smith continued his early season success, racing into the runner-up spot and coming home with a solid second place finish.

Defending track champion Bryan Bennett topped the first appearance of the Medieval USRA Stock Cars in the 2021 season after starting on the outside of the front row and driving off into the early lead and never looking back.

Bennett began the defense of his track title in dominant fashion, crossing the finish line in first over pole sitter Shane McNutt and fourth-starting Devon Jobin.

Jonathan Burton stormed from his 17th starting position to cross the finish line fourth with Fred Gibson rounding out the top five.

The final event of the night lived up to the billing as 28 USRA Modifieds took to the speedway for their 25-lap finale.

Jonathon Ortega and Philip Houston paced the field to the green flag and Ortega was able to edge out front on the opening lap.

Ortega and Houston battled in close quarters for the top spot while Ricardo Olague Jr., Austin Adams and Terry Tipton were hot on their heels.

Several three-wide battles ensued early in the event with Ortega out front and the rest of the hungry pack trying to chase him down while several mid-race caution flags kept the field bunched up and racing action hotly contested.

On the second restart, all eyes were on 28th-starting Nick Rivera and 17th-starting Bumper Jones who were both working their way through traffic with ease and both appeared in the top 10 before the mid-point of the event.

The race for the lead continued to be entertaining with Ortega still sitting out front and Houston in tow.

Rivera suddenly stormed into the top five and began putting pressure on the top runners as the laps began to wind down.

The final restart of the night with five laps remaining set up a dynamite five-lap dash with Ortega continuing to lead followed by Rivera and Jones.

Jones was able to clear into third and immediately jumped to the cushion and began screaming around the top side of the Vado Speedway Park, pulled alongside of Rivera for second with two laps remaining and then showed himself to the outside of Ortega as the white flag flew.

The duo circled the speedway door to door on the final lap with Ortega nipping Jones at the finish line by 0.009 second in a true photo finish.

Rivera completed his 28th to third place run with Houston and Jimmy Ray, who restarted at the tail after an earlier spin, coming home fourth and fifth.

Full results are available at vadospeedwaypark.com/results.

The Vado Speedway Park will be back in action Saturday, April 3, at 7:30 p.m. with the track’s Egggstravaganza Easter Celebration event. The Easter Bunny will be on hand to meet and greet fans of all ages from 5-7 p.m. and kids will be able to participate in an easter egg hunt on the concourse at 6 p.m. as well. Pits open at 4 with the grandstand opening at 5.

For fans not able to attend in person, all events held during the 2021 season at the Vado Speedway Park will also be streamed live online at watchfye.tv.