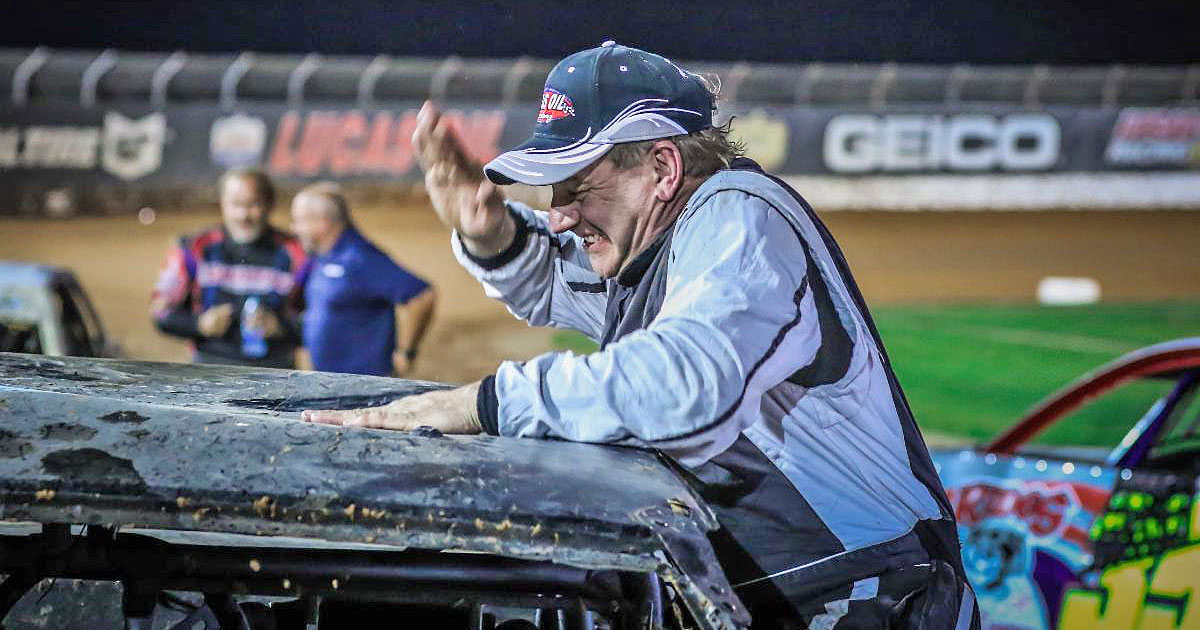 Doug Keller might not have been your typical “Rookie of the Year” in the USRA Stock Car division last year, being 48 years old with a wealth of racing experience under his belt.

Keller had a successful stretch in USRA B-Mods before giving the full-bodied Stock Car class a whirl. Long before that, the St. Joseph, Missouri, driver had extensive experience on a national level, starting 17 NASCAR Truck Series races from 2001-03 and 25 ARCA races from 1998-2009, with three top-five finishes.

Keller wasted little time making an impact in the Medieval USRA Stock Cars, winning 20 races and finishing second in Summit USRA Weekly Racing Series national points in 2020. One of his wins came at Lucas Oil Speedway last June as the USRA Stock Cars appeared as a guest class during a mid-week program headlined by USMTS Modifieds.

Now that the O’Reilly USRA Stock Cars are part of the Big Adventure RV Weekly Racing Series, look for Keller more often in Wheatland. While he’s not committed to running for weekly or national points, the veteran who’s a year removed from being a “rookie” doesn’t rule it out, either.

“My biggest concern about chasing (Lucas Oil Speedway) points ... I don’t know what the competition will be,” Keller said of past Street Stock competitors who are making the switch to Stock Cars. “It might be wishful thinking to come to a new track and run with a bunch of guys with experience there… but the only way to know is to try it.”

Keller also has an eye on preparing for the Summit USRA Nationals powered by MyRacePass—a three-night extravaganza coming to Lucas Oil Speedway for the first time October 7-9.

“That Iowa dirt was weird, it was black,” Keller said. “I couldn’t tell if it was slick or tacky. It was a challenge. Maybe the Missouri boys will have a little advantage at the Nationals this year.”

Keller is set to begin the season with an ungraded program, which included two race cars and a new multi-car hauler. He said inspiration for that came partly from his trip to Lucas Oil Speedway last June and viewing all the sharp USMTS haulers in the pit area.

“We pulled in with a dually pickup and the car on a flat bed with four spare tires and that was it,” he said. “We won the race and the USMTS guys thought that was cool, but to me it was stressful.

“I’ve raced about 42, 43 years and have a lot of stuff. To leave all your stuff at home kind of sucks. You don’t have it because you don’t have room for it. So we bit the bullet and bought a semi with a multi-car hauler.”

Keller said he’s considering using the new equipment to make a weekend swing of it through south-central Missouri, racing on Friday nights at Dallas County Speedway in Urbana and Lucas Oil Speedway, about a half-hour to the west on Saturday.

“We can have a car for Dallas County on Friday and have the other car ready for Lucas on Saturday. If I have any damage or maintenance, I don’t have to work all day Saturday to get the (Friday) car ready ready. Or, we might run same car both places. But it will be nice have the option.”

“But that’s like a 32 or 33-night schedule. That’s too much for us,” he said, with a laugh. “The Lucas 14-race schedule looked really appealing.”