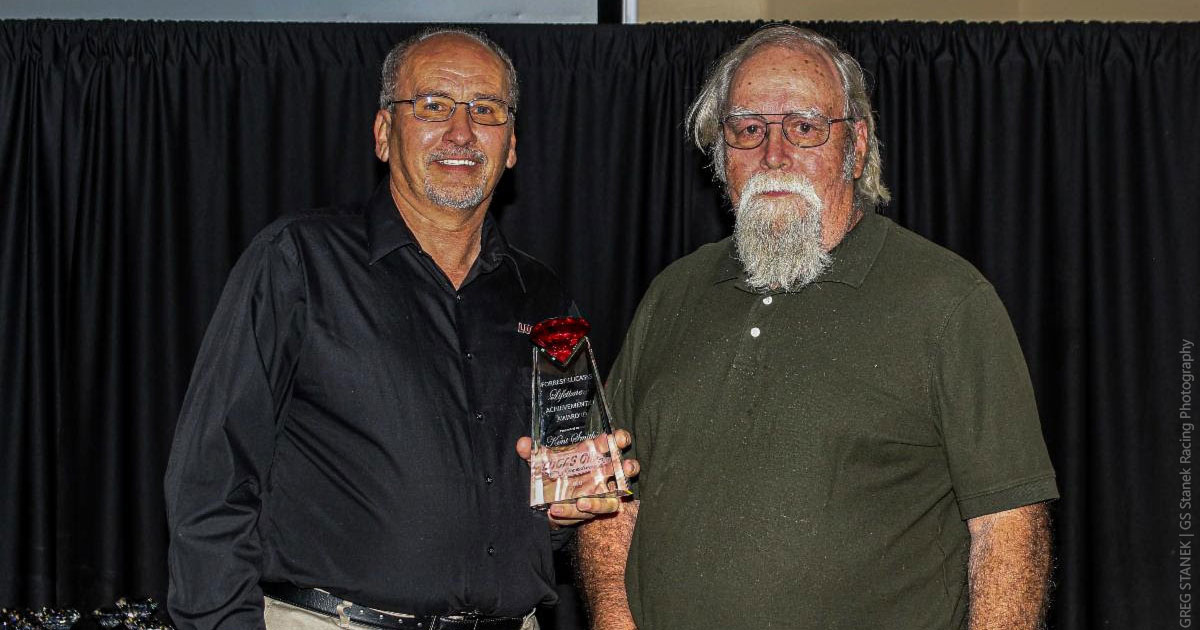 Kent Smith, the long-time “Mr.-Fix-It-No-Matter-What-It-Is,” became the fourth recipient of the Forrest Lucas Lifetime Achievement Award, given for contributions to the sport on and off the track. The event, which honored season champions along with other specialty awards, was held at Camden on the Lake Resort in Lake Ozark.

“You cannot understate Kent’s contributions to Lucas Oil Speedway and dirt-track racing in Wheatland in general,” Lucas Oil Speedway General Manager Danny Lorton said. “I cannot think of anyone who is more deserving of this honor than Kent.”

When you take a walk around Lucas Oil Speedway it’s difficult to find any part of the track, piece of technology, or building that Smith, who celebrated his 75th birthday on Saturday, hasn’t had his hands on.

When Ron Jenkins started building Wheatland Raceway in 2001, Smith was there. He worked mostly behind the scenes, advising on day-to-day activities, working on anything that needed to be done, and running the parts department while wife Marilyn ran the pit office and concession stand.

He joined forces with Gary Hubert in 2004 when Forest Lucas acquired the facility and helped transform the raceway into the Diamond of Dirt Tracks. Smith worked with utilities and helped again to write the original rules. No task was too big he couldn’t solve.

In 2011, he became head of maintenance for Dan Robinson, where he fixed anything from heavy machinery to speakers to even an old jukebox that was broken.

Even today, if anything goes wrong around the race track, the first call anyone makes is to Smith.

Originally from Wheatland, Smith fell in love with racing at an early age becoming a fan, hitchhiking rides to watch races at Humansville. He ran the Hickory County Auto Body shop in Hermitage for years before he and Squeak Richards went into the racing parts business with K and S Motorsports in the mid-90s. He developed a great relationship with drivers and became one of the biggest distributors in the area.

That evolved into building Modifieds ran by drivers such as Robbie Ott and Keith Short at local tracks. Smith’s grade-school relationship with Bill Allen turned into a business relationship when Allen built Urbana’s track in 1997. Smith took care of anything mechanical or electrical, loaned Allen a pickup truck for a year and dealt with track prep weekly. He understood the technical aspect, helped clean up the rule book, and when he put a rule in place, he got it right the first time. Track champions and overall top 10 in points in each of the four Big Adventure RV Weekly Racing Series divisions were recognized.

Look for the 2021 Lucas Oil Speedway tentative schedule to be unveiled in the near future.

For ticket questions or information for future events as Lucas Oil Speedway, or to inquire about gift certificates or season passes for the 2021 season, contact Admissions Director Nichole McMillan at (417) 282-5984 or email her at nichole@lucasoilspeedway.com for more information.