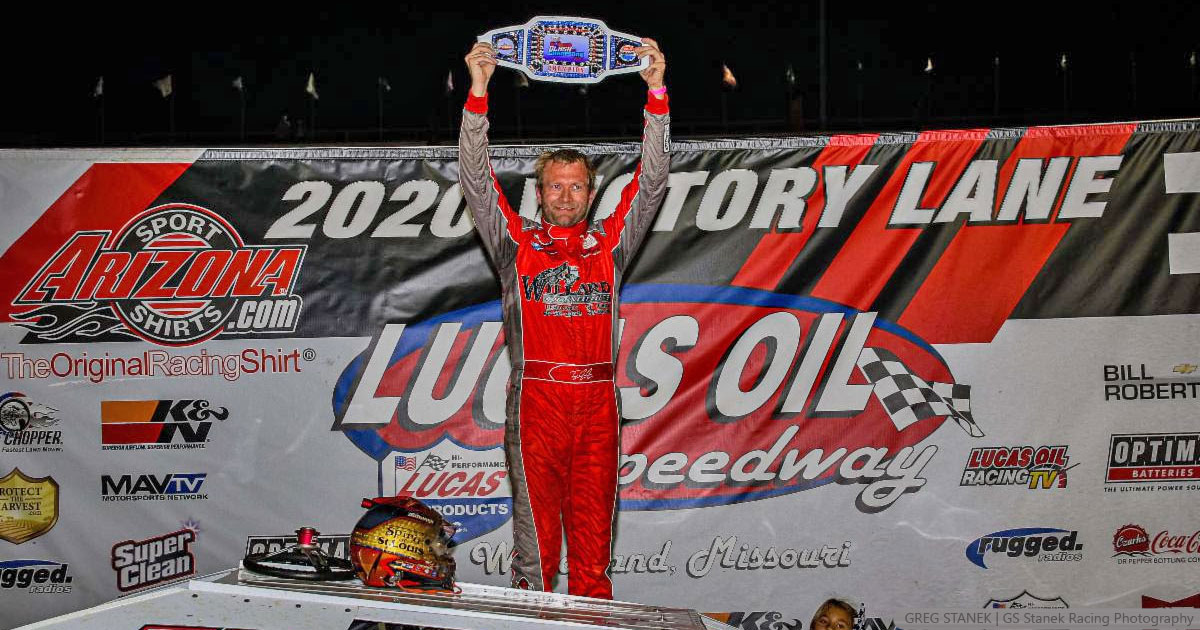 The USRA B-Mod Clash of Champions III presented by RacinDirt.com went to a Jackson, but not the Jackson many might have picked.

Tony Jackson Jr. outran his cousin Kris Jackson to win Saturday night's feture race at the Lucas Oil Speedway in action that capped the oval track season at the track.

Jackson Jr., who earlier finished 10th in the Lucas Oil MLRA Late Model feature, made the most of a rare appearance behind the wheel of a USRA B-Mod.

He rallied from his 10th starting position, took over the lead on lap 27 and beat Kris Jackson—the defending Clash of Champions winner—by 2.8 seconds. Both drivers are from Lebanon.

Dillon McCowan of Urbana charged from 13th at the start to finish third. Like the top two, McCowan was driving a Rage Chassis.

"It's a lot of fun," Tony Jackson Jr. said, holding an oversized check for $3,000 and a championship belt. "Kris does all the stuff to these cars. I don't touch this thing. It just shows you what kind of work he puts in. This thing drove itself."

A trio of current or past USRA B-Mod national champions set sail from the start with J.C. Morton leading Kris Jackson and Andy Bryant through the first four laps. Bryant got past Jackson and into second on lap four.

Morton opened a 1.3-second lead when Jerry Ellis spun on lap 14 to bring out the first caution.

Before another lap could be completed, Bryant and fourth-running Mike Striegel spun in turn four to bring out another yellow and send those two contenders to the back of the pack.

Two ensuing attempts to restart were foiled, first by a single-car spin and then a multi-car pile-up among cars running outside the top 10.

Once the race had a prolonged green flag run, Morton opened up a commanding 2.9-second lead by lap 26 over Tony Jackson Jr., Kris Jackson and McCowan.

But that lead was wiped away when Wesley Briggs spun to bring out the event's fifth caution.

Heartbreak struck Morton after the restart as he slowed suddenly, smoke pouring from the motor, in turn two on lap 27.

Tony Jackson Jr. inherited the lead and held on from there with Kris Jackson second, McCowan third and Bryant, rallying from his early spin and another near spinout that set him back several positions, winding up fourth.

"Like I tell everybody—Late Models, B Mods, A Mods—everybody in the Midwest here, they're good race car drivers," Tony Jackson Jr. said. "We travel all over and the best is right here."

Kris Jackson, who's battling for a third straight USRA B-Mod national championship, said he was probably fortunate to finish as high as he did.

"He was much better than us in the center of the turn," Kris Jackson said of tjhe winner. "He could get his traction coming off a little better than we could. We're pretty luck to be in second really. We kind of missed it tonight. We just weren't very good tonight.

"Second is pretty stellar with this field of cars. We'll take it. Congratulations to Tony."

McCowan, the 16-year-old up-and-comer, said he was happy with his improvement of 10 positions from his starting spot.

"It was a heck of a charge. The guys, they had the car on point for me," McCowan said. "There at the end me and Kris had a great battle. Congrats to Tony. It was a good track tonight."