Track champions crowned at I-37 Speedway 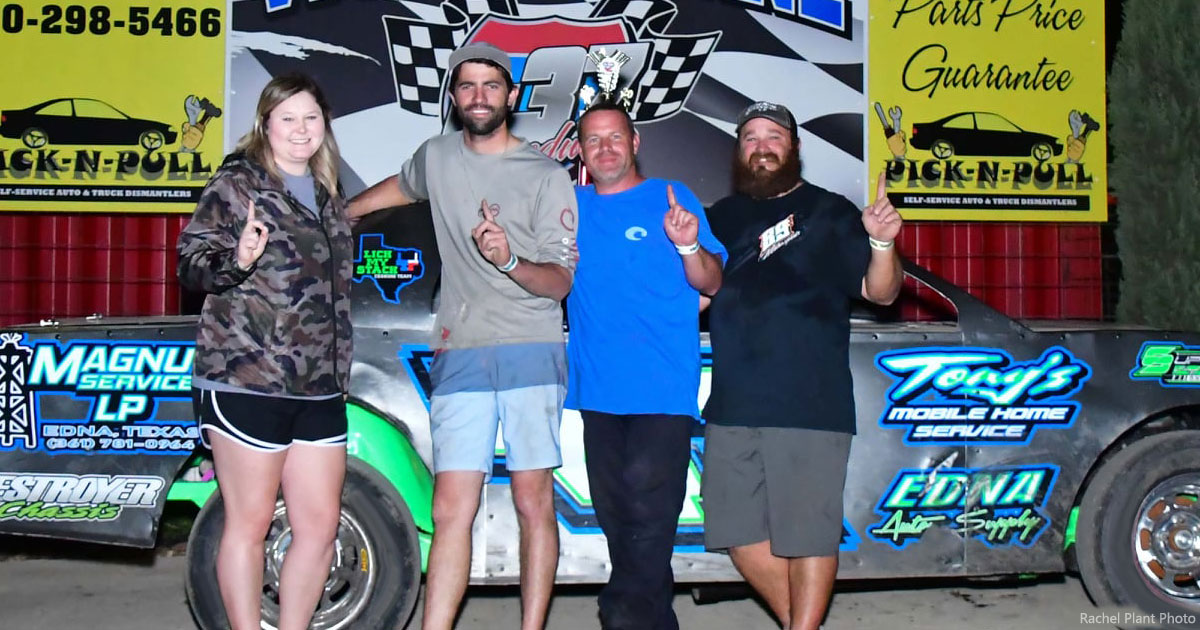 The regular I-37 Speedway came to an end Saturday night with USRA Limited Mods and Sunoco Factory Stocks up for grabs, sort of. Plus, after a one-two finish by Steve Whiteaker Jr. and Johnny Torres in the last race, the bounty was still up for grabs with an addition $100 added and another $100 for anyone winning as a first-time visitor.

The only points race up in the air is Sunoco USRA Factory stocks, but by making a lap in his heat race, Josh Sewell locked up that championship. Mike Lyon, Michael Keylich, Dustin Hurley and Jesse Sandoval complete the top five.

Whiteaker with the win: As the 20-lap Swenson Racing Products USRA Limited Mod feature fired off it looked like Edward Oakes might be taking home the bounty money. Oakes was first to turn 1 trailed by Torres, J.J. Jennings, Whiteaker and Dustin Butcher but a spin by Gary Hall restacked the field. On the restart Jennings took third from Torres as Whiteaker began challenging Oakes for the lead.

The two were side by side while Maupin got by Butcher and Anthony Gordon for fourth. Jennings' top-three run ended on lap 6 when he slowed and stopped. After another quick spin and caution, Whiteaker was looking low on Oakes for the lead while Torres was trying the high side on Whiteaker for second.

At the crossed flags it was Oakes, Whiteaker, Torres, Maupin and Gordon in the top five with Butcher, Doyon and Heath Stewart three wide for sixth. Oakes missed the top line and gave Whiteaker an opportunity to close in and get inside. Two laps later Oakes again missed the exit off the top and slapped the front stretch wall. “I don’t think I could have passed Edward (Oakes) if he didn’t make that big mistake,” replied Whiteaker. “Turns one and two were just too fast up top. At the end I felt my car was faster than his but passing him was going to be a different story.

“Our Best engine has been put to the test this year at I-37 with the hammer-down tracks, that’s for sure. It just feels good to race again. I hardly raced any in 2018 and 2019. That’s three in a row, five wins and two seconds out of seven starts. I can’t thank all my sponsors enough.

“Congrats to J.T. on his championship and also congrats to Milton Hope on is retirement from a successful career in race track announcing.”

Hessong hangs on for Factory Stock score: The normally wild and crazy All-In Designs USRA Factory Stock feature was no exception as nearly all of the top five points contenders suffered problems at one time or another during the 20-lap event, that actually made it all the way for a change.

G.W. Hessong led the 23-car field into turn 1, but it was Torres getting the lead off turn 4. Behind him, Hessong, Dustin Hurley, Wade Jones and Mike Lyon fell in line. In the pack Michael Keylich went around collecting Jacob Burnett, Jerry Miller, Frank Okruhlik, Clint Montanio and Aaron Leddy. Another spin by Kasey Krauss on the restart was a near miss by the field.

Hurley was next to be bitten by the contenders curse spinning from third. This left Hessong, Jones and Riley Heil now three wide for the second spot. Hessong got by Jones low for second with Heil still looking up top and Dillon Gaither getting fifth from Robert Kelm. Points leader Sewell had his trouble on lap 6 going around and collecting Gordon.

On the single-file restart Hessong was looking up top on Torres for the lead with Gaither taking fourth from Heil. Hessong got the lead on lap 8 with Ray Doyon, John Lieta and Jesse Sandoval three-wide for sixth. At the mid-point it was Hessong, Torres, Jones, Gaither and Heil in the top five. While battling for fifth Heil and Doyon made contact with Heil going around on lap 15.

Coming to green on the restart the pack stacked up in turn 4 collecting Doyon, Lieta and Mike Lyon. As green flew again, Torres gave Hessong, who was now showing some smoke, a look inside with Allen Alexander moving up to fifth. Gaither got a run on Jones to grab third with three to go, taking the spot.

Gaither then moved in to battle with Torres for second with two to go. This gave Hessong, still trailing some smoke, the chance to creep away slightly. On the last lap Gaither got second from Torres, but it was Hessong (Edna) hanging on despite the smoke in the Magnum Services, Magnum Motorsports, Edna Auto Supply, Tonys Mobile Home Service, Lieta Farms, Rock Motors, Lick My Stack Cooking Team, Wicked Transmission, Destroyer Chassis.

“I smoked it a little bit, but I didn't hurt it,” reported Hessong. “I kept on watching the oil pressure and we were good. So I just kept her hammer down. I was following Johnny (Torres) for the longest time and not getting anywhere. On that single file restart I thought I'd just sail it off in there on the top and hope it sticks. I did it, and it stuck. I was able to pull it off.

“This is the sixth night on the car... Two wins in a row, two different tracks. That's pretty good. I'm just now finding the set-up that works. I might make a spring adjustment. I try not to change anything. We'll see from here on out.

“This was a bare cage when we got it. A lot of us built the car in two-and-a-half weeks. It was a whopping, but it was worth it. We're going to run every big show we can possibly run.”

Garners gets green in Tuners: Jamie Garner and Johnathon Cervantes stayed door to door off turn turn 2 before Garner got the lead with Cervantes, Dylan Kowalik, Ronnie Schoenfeldt and Ryan McDonald on his heels. Cervantes run up front ended on lap 2 when trouble forced him to pull off. Garner was quickly in slower traffic splitting Aaron Tipton and Darrel Jones three wide.

McDonald was able to get past Kowalik in traffic for second. At the crossed flags it was Garner, McDonald, Kowalik, Adolph Tracy and Schoenfeldt in the top five. McDonald got under Garner and took the point on lap 12. Kowalik used traffic to pressure Garner for second as they diced three-wide through slower cars.

Garner ran McDonald back down with three to go and was looking low. The two were side by side for the lead as the flagman showed them two to go. McDonald's chance for a win ended on the white flag as he slowed allowing Garner(San Antonio) the uncontested run for the win in his VW Sirocco. “First loser,” joked Garner in regards to the points season. “We've had a pretty good season this year with three wins. We can't complain. All these young guys beating on me, that hurts.

“It's too bad Brandon (McCall) broke a CV joint, I think. I think we could have put on a show for the fans. Ryan (McDonald) kept me on my toes though, I can tell you that. He did a heck of a job. When he got by me I couldn't believe it. I just hung in there and finally got it back. That lapped traffic was really hit or miss and hope you found the right line.

“There wasn't a chance I'd go run that national points race. That's too far and this is a local group. I think it should stay local myself.

“I need to thank all the guys that help get me out there: Brown Chevrolet, Joe and Adrian Shoemaker, Kirk Ball, Gerald Higley, Darrel Jones and Rick Pollaro.”