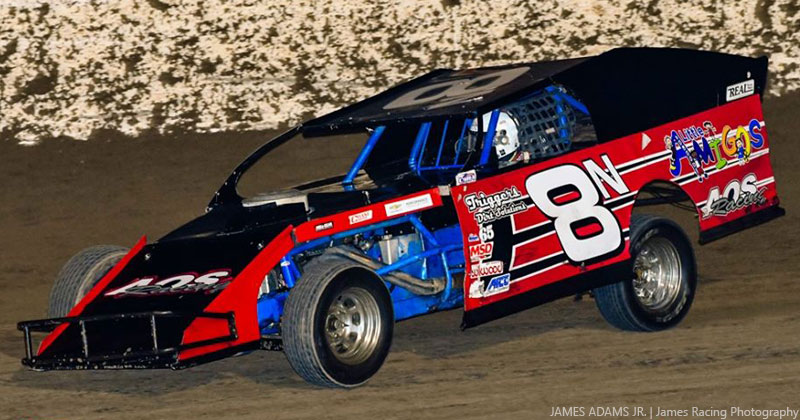 Rivera, who has a long history in racing, had been a championship contender in the past but put it all together in 2019 to secure the track title during the opening season at his new hometown track.

He owns K&N Underground in Las Cruces, is 26 years old and has been racing for 15 years. He used to rodeo at the New Mexico State Fairgrounds where the Southern New Mexico Speedway was right next door. One week after seeing his first race, Rivera and his family bought a car and about a month later was his first race—the Winter Meltdown.

From that weekend on, Rivera raced every chance he got and improved as time went by. He picked up a few heat wins, trophy dashes and eventually got a main event win towards the end of the 2004 season. He raced Street Stocks until 2009 then took a short break until 2010 when he was offered a ride in a Modified, which he raced for a full season before taking a four-year break from racing to go back to rodeo, where he team- and tie-down-roped until he got the itch for racing again in 2015.

At the start of 2015, fellow racer Fito Gallardo put Rivera in his USRA B-Mod and Rivera was able to pull off a main event win in his first night back out. He raced to a couple more wins during the 2015-2016 seasons.

In 2018, Rivera was able to have the car ready and ran a full season where he was a track championship contender but missed just one race, knocking him out of contention for the championship.

He won the first race of 2019 at the new Vado Speedway Park and it ended up being an awesome season, as he picked up the first ever USRA B-Mod main event win at the track—the season’s last main event—and racing to the 2019 USRA B-Mod track championship as well.

Looking forward to the 2020 season, Rivera has moved up into the URSA Modified ranks looking to quickly get up to speed and become a factor in an already stout field of weekly competitors. Rivera dabbled in the Modified division back in 2004, but plans to compete for the 2020 track title in the ‘big mods’ this season.

He also plans on racing in several other USRA and select USMTS events throughout the course of the season as his schedule permits.

The state-of-the-art Vado Speedway Park opened in June of 2019 and held a total of 30 events during between the June 14 opener and the finale on November 30. The track will enter its second season in 2020 with nearly 40 events planned for its sophomore season.

Anyone wishing to see Rivera in action during the 2020 season can go to VadoSpeedwayPark.com for event dates, ticket prices and other information.