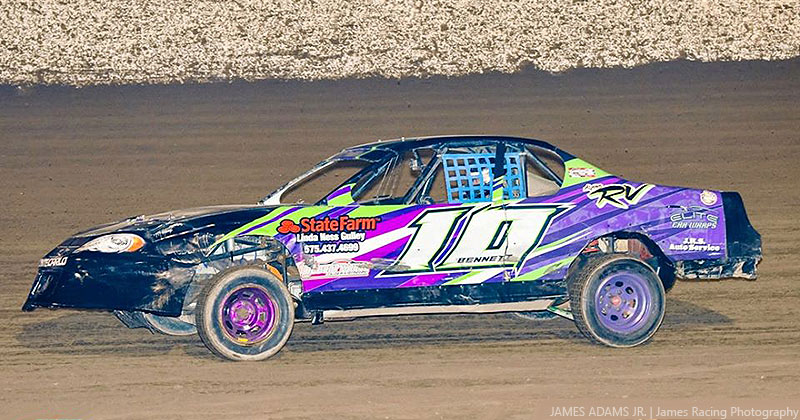 Tularosa, New Mexico’s Bryan Bennett recently completed a year of firsts during the 2019 season at the Vado Speedway Park by not only winning his first ever USRA Stock Car feature event, but parlaying that victory into his first USRA Stock Car track championship as well.

Bennett raced to the track title by a whopping 290 points over second-place finisher Mark Smith.

Bennett, who is a construction superintendent by trade, had never raced for points before but decided to do just that when the 2019 schedule was released.

His Prowler Chassis with a Cruse Racing Body is powered by a Gary and Mark Jones Racing Engines and lettered by Elite Car Wraps. He is proudly sponsored by Linda Ness Gully State Farm, JRS Auto Service and Alamo RV.

For the 35-year-old Bennett, the 2019 season was a dream. He raced to victory lane four more times, secured 20 top-five finishes and only finished outside of the top ten one time during the 25 events that were held.

Bennett got into auto racing first by working at the Tularosa Speedway, serving on the track prep crew during the 2013 and 2014 seasons.

After working at the track for a short time, he decided that he needed to get a car and began competing in the Factory Stock division and raced for two seasons.

He moved to the Street Stock class in 2015 and raced those for a pair of seasons before transitioning into the USRA Stock Car class in 2017.

Bennett has a great support system that follows him from track to track including his fiancé Shannon and kids Justin and Evan. He has many family and friends that help him in the pits as well, including Wyatt Loveland.

Looking forward to the 2020 season, Bennett plans on competing weekly at the Vado Speedway Park to defend his championship.

The state-of-the-art Vado Speedway Park opened in June of 2019 and held a total of 30 events during between the June 14 opener and the finale on November 30. The track will enter its second season in 2020 with nearly 40 events planned for its sophomore season.

Anyone wishing to see Bennett in action during the 2020 season can go to VadoSpeedwayPark.com for event dates, ticket prices and other information.