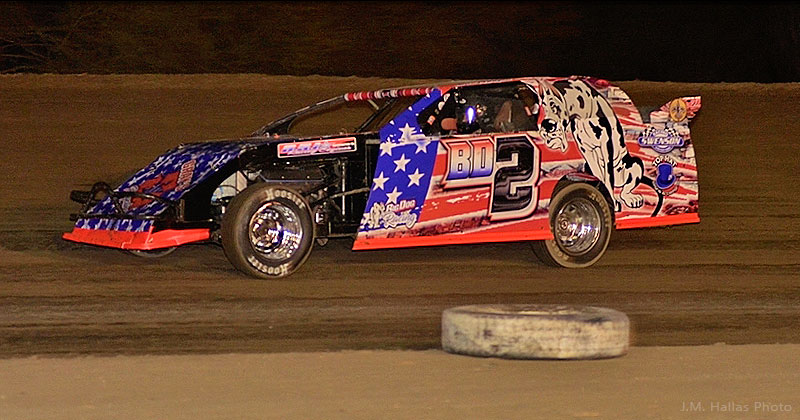 It was a full night of entertainment Saturday night as I-37 Speedway kicked off its 2020 regular points season on the 1/4-mile, semi-banked dirt oval just south of San Antonio.

As if a full night of racing wasn't already enough, it was Fan Appreciation Night with a post-race concert by Shawn Hart sponsored by Carroll Construction.

At the start it was Marcus Mikulencak leading the way into turn 1, but it was Maupin powering off turn 2 with lead. Following Maupin were Mikulencak, Rowdy Flanagan, Ryan Doyon and Johnny Torres. Doyon was able to snag third as the top three pulled ahead by lap 5. Shawn Obannon spun in front of the leaders on lap 8 setting up a series of restarts that saw Maupin, Mikulencak and Doyon almost three wide at one point.

At halfway it was Maupin, Mikulencak, Doyon, Talon Minten and Torres in the top 5. After a stoppage for Austin Majek finding the front stretch wall it was three wide again up front with Maupin holding the spot. Mikulencak was giving Maupin a look low when Sterling Tausch looped it and had Cheryl Gray launch over the hood to bring out a yellow.

Once back to green, Mikulencak again was looking low on Maupin while Minten and Torres ran wheel to wheel for third. Mikulencak, Torres and Minten then began their own little battle giving Maupin some breathing room in the final laps. At the checkers it was Maupin in the Big Dog Racing/Grays Recycling/Swenson Racing Shocks/ASI powered Express Chassis.

“I got a little tired of second place,” joked Maupin. “It was almost like repeat of last week running with Marcus (Mikulencak), you can't beat that. We've got this car rolling pretty good and I'm pretty confident each time we hit the track.

“It's kind of like which one of us gets out front first. He (Marcus) said if you get out there I don't know if I can get past you. He started trying to throw some sliders. The good thing is I know I can trust him. He's not going to be real dirty and door me. Once I got out front I knew it was going to be tough to pass me on the bottom. There was just nothing there.

“I had no idea it was three wide a couple times. I want to watch the video now. After the first green stretch I was looking to my guys in the stands and they said I had a big gap. I was just trying to hit my marks over and over again. I knew with all those yellows that someone would try to get me on a restart.

“We had this car at home in the valley all week. It was at our shop and we get it going, scale it and try to get it home any chance we can. Every time my dad and I get in a discussion on driving style, it's an argument. It never goes smooth. He's kind of stopped, loosened up a bit and lets me do my own thing.

“Switching cars absolutely was a challenge. Those first five laps in the Modified I didn't know what I was doing. Everything happens faster, the car is more sideways, the tires don't hook up as good and everyone is faster. It's a weird transition, but I think the more and more I do it, I'll get in a nice habit.”

Keylich captures first sunoco USRA Factory Stock win: Michael Keylich (LaVernia) worked his way from the fourth row to make a late race pass and snag his first ever Sunoco USRA Factory Stock feature win. As green flew on the 21-car field it was Jesse Sandoval first to turn 1 trailed by Tryton Temple, Allen Torres, Josh Sewell, Dakota Hurley with Aaron Leddy and Kyle Kirkland side by side for sixth.

Temple quickly began challenging Sandoval getting by in turns 1-2 to lead lead lap 3. Sewell, using the high side, got by Sandoval, but got hung in traffic giving up spots to Sandoval, Torres and Hurley. Hurleys top run ended on lap 8 when he looped it battling with Torres. His luck got even worse when he was caught up as Johnny Johnson found the front stretch wall.

As racing resumed coming to halfway it was Temple, Torres, Sandoval, Sewell and Keylich. After a spin by Zylar Bryant, Keylich took fourth from Sandoval and caught Sewell for third. Sewell and Keylich both got past Torres. With Temple easing ahead, Keylich, Sewell and Torres had good scrap going until Torres pulled off.

A late caution changed the complexion with the field rebunched on lap 17, for a three-lap shootout. As green waved Keylich tried the topside on Temple for the lead in turns 1-2. Keylich led lap 18 with Temple trying to fight back on the bottom. Keylich held his ground in the Keylich Electric/CPU Computer Repair/Double K Landscaping/Keylich Auto Repair/Jenn's Liquor/Differentials by Dale/All in Designs/Mission Race Engine powered Destroyer Chassis.

“It feels real good (to get the first win),” replied Keylich. “When I came to this track four years ago I never thought I'd get this far. I do this to have fun. If I win, I win, if I lose, I lose. Winning was a bonus tonight. I usually don't drive that good. It was awesome battling with Tryton (Temple) for the lead. Luckily I edged him out. The kid is good. I wish I was as good as he is.

“This class is easier for me to drive just because I had never raced on dirt before. The Sport Mod was a lot lighter, a lot harder to drive. With these cars you can drive them in there, get a little out of shape and come out alright.

“We're going to try to do some big shows with this car, the Factory 50, the TMS Championship deal and hit some others, do some traveling. We'll run here and South Texas Speedway for the USRA points.

Schoenbaum showin' the way: San Antonio's Brian Schoenbaum showed he was in prime form early in the season taking the 20-lap USRA Tuner class victory over the 14-car field. Adam Tracy jumped out front early trailed by defending champ Jamie Garner, Schoenbaum, Brandon McCall and Michael Burris Sr. After a brief battle with Garner for second, Schoenbaum got inside Tracy for the lead on lap 7.

At halfway it was Schoenbaum, Garner, Tracy, McCall and Burris in the top five. Garner was applying the pressure on Schoenbaum for the lead as the top three edged away with Michael Burris Jr. getting by his dad for fifth. Garner and Schoenbaum were side by side at the line for the lead on lap 15.

Behind the lead battle Tracy slapped the turn 4 wall, ricocheted back across the track and got submarined by Burris Jr. sending the car on its side before landing back upright. Burris Sr. also got caught up with others squeezing through the near totally blocked track. Luckily everyone was alright.

After the red flag, it was Schoenbaum getting away while Garner and McCall ran door to door. Garner cleared McCall and tried to close, but never got back close enough as Schoenbaum in the Big A's BBQ, Bonham Recovery/Tracys Oil & Gas/Central Cedar/KR Promotions/Rabid Motorsports/five1seven Designs/Twisted iPhones/Superior Steering Wheels/IHFP Clothing/Chevy Cavalier took the checkers. 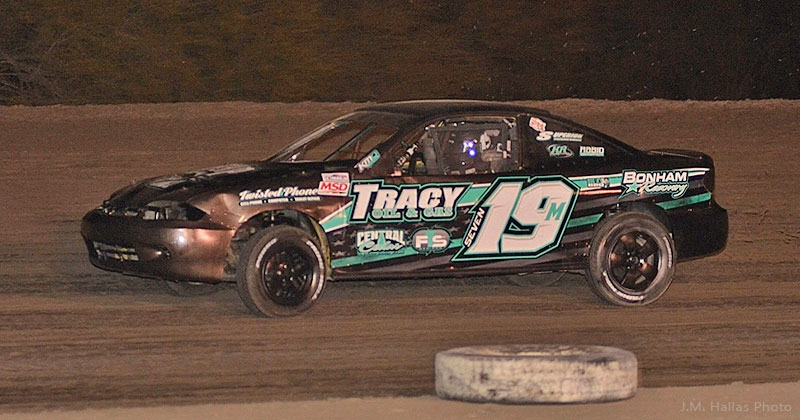 “The competition has really stepped up since last year,” said Schoenbaum. “Not only down here, but all over Texas. These guys are getting quicker and quicker. I could hear him (Jamie Garner) back there. I was protecting the bottom and he got a good run off turn 4 and we made a little contact. I wanted to push him up a bit, but went too high. So, it was an apology in tech thing and he was cool with it.

“It was a fun race. Coming up from the outside of the second row you probably could have thrown a blanket over the top four of us at one point. It was a good battle. I had a blast. It's been a while since the last time I won. The end of last season I had some issues with the car. It's good to taste victory again.”