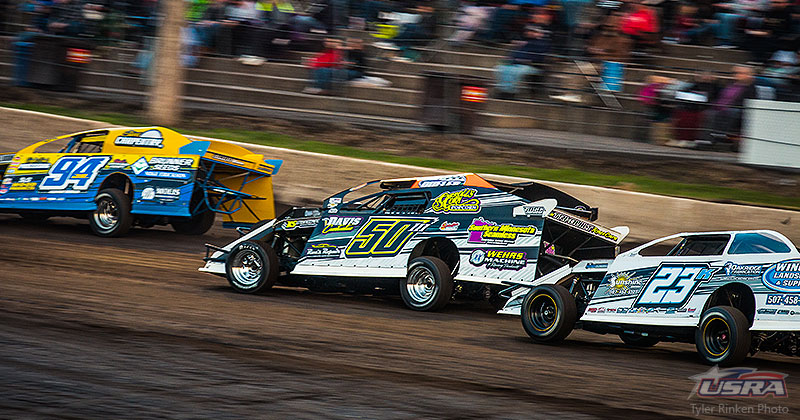 Returning to the top of the heap in the USRA Modified division, Brandon Davis enjoyed a dominating season en route to his second Summit USRA Weekly Racing Series national title. His first came in 2012.

Davis, who manufactures his own Tri-Built Race Cars in his hometown of Hayfield, Minn., reeled off 15 victories during the 2019 campaign including a streak of six straight to end the season at arguably one of the toughest places to get a win—the Deer Creek Speedway in Spring Valley, Minn.

He snagged a total of seven wins at ‘The Creek’ and another six at the Chateau Speedway in Lansing, Minn. He captured track championships at both. His other two wins were big ones—opening night and the finale of the sixth annual Summit USRA Nationals at the Hamilton County Speedway in Webster City, Iowa.

He is the eighth USRA Modified national champ from the Land of 10,000 Lakes.

Perhaps most impressive was the consistency that the 28-year-old racer showed during the season. In his 36 starts, he finished among the top five 33 times and was outside of the top ten just once.

Dustin Sorensen of Rochester, Minn., was second in the final points while Iowan Dennis Elliott parlayed another I-35 Speedway (Winston, Mo.) track championship into a third-place finish in the national points to place a buffer between two more Minnesota top-five racers Josh Angst and Jason Cummins. 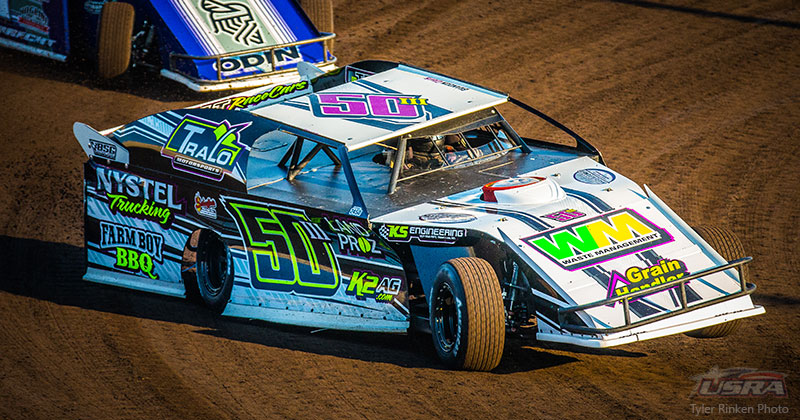 For the sixth time in nine years, Decorah, Iowa’s Mitch Hovden will take home a national championship trophy from the USRA awards banquet after snaring his sixth national title in the American Racer USRA Stock Cars presented by Medieval Chassis.

Hovden, who claimed last year’s crown as well as back-to-back titles in 2015-2016 and 2011-2012, won the track championship at the Fayette County Speedway in West Union, Iowa, but finished second this season.

However, he improved from his runner-up finish last year and regained the track championship at his home track Upper Iowa Speedway.

Hovden captured 20 feature wins in his 40 starts but was a top-five finisher in 37 of those races and finished outside of the top ten on just two occasions.

Hovden is the most decorated driver in USRA history with nine titles in all. He captured Arnold Motor Supply Iron Man Challenge points championships in 2013 and 2014. His first USRA points title came in 2007 in the Mensink Racing Products USRA Hobby Stock class.

The 32-year-old’s national title is worth $2,000 with as much as $1,000 heading his way for the first- and second-place finishes in track points. As the PBM Performance Products Northern Region champ he’ll pocket another $217. 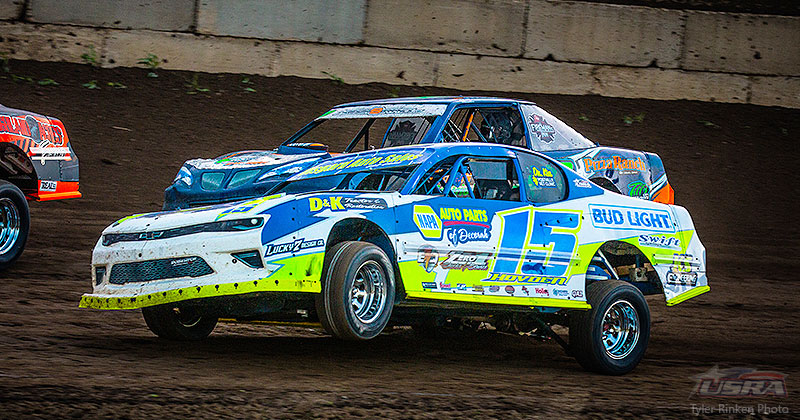 While his 28 feature race victories were one fewer than last year, it was still more than enough for Kris Jackson to secure his second straight national championship in the Out-Pace USRA B-Mods powered by Pace Performance.

Jackson didn’t stay put. He competed at 11 different racetracks during the 2019 season and won at eight of them. There were no regional or track titles, therefore, but a $2,000 payday awaits the 35-year-old racer. 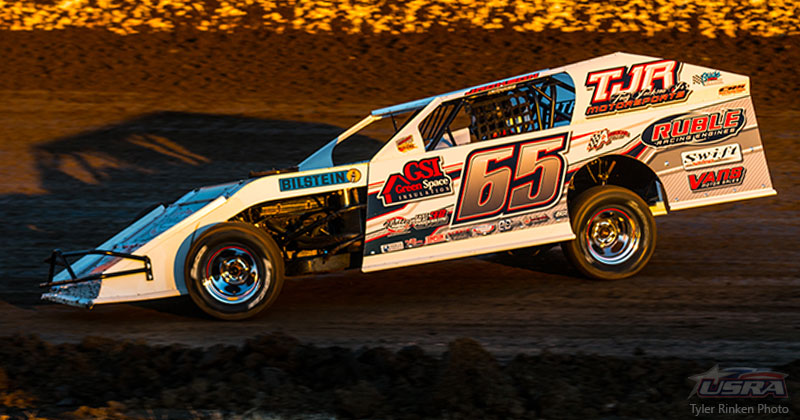 The two engaged in a fierce battle all year—both on paper and on the racetrack—with Stanton earning his first USRA national championship. He won 18 times while Gulbrandson hauled in 16 wins and came wound up with a 21-point cushion for the 21-year veteran after the dust had settled.

Along with his wins, Stanton recorded 32 top-five and 34 top-ten finishes in his 37 USRA-sanctioned starts.

His crowning achievement came on the biggest stage during the finale of the sixth annual Summit USRA Nationals on Oct. 19. It was his second win in the event as he won the inaugural race in 2014 at the Lakeside Speedway in Kansas City.

Stanton will get $1,500 at the USRA awards banquet for his national championship payout. 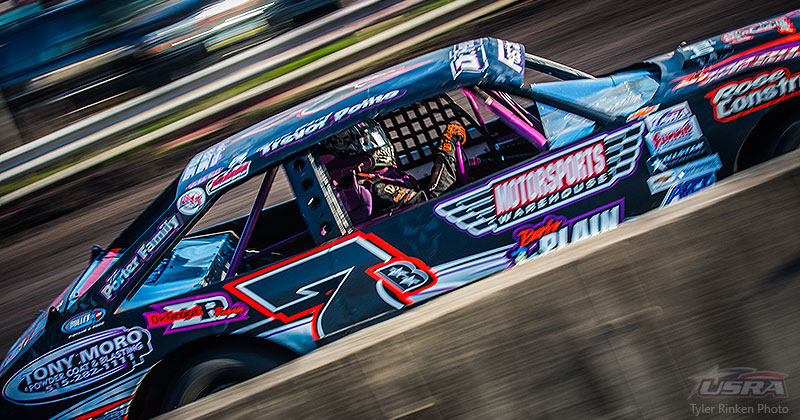 For a third straight year, a national champion was be crowned in the USRA Late Model division, and for the first time the honor goes to Lucas Peterson of Grand Meadow, Minn., whose 24 starts were five more than his nearest finisher.

Peterson was unable to find the winner’s circle in 2019 but scored 20 top-ten finishes and cracked the top five on six occasions en route to a $700 champion’s check. 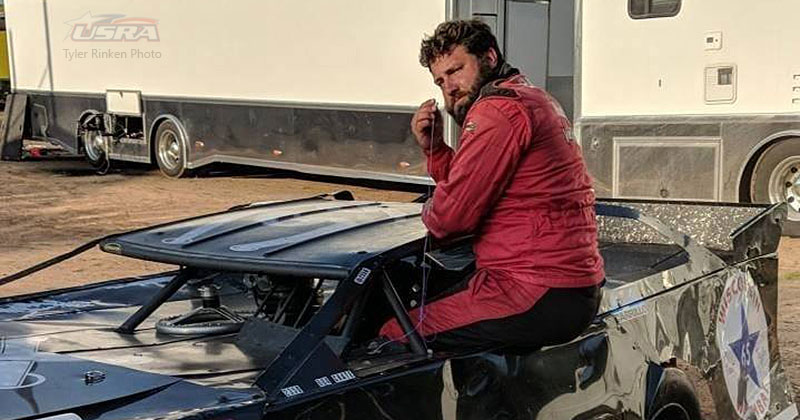 The 2019 racing season was also the third in a row for crowning a national champion in the USRA Tuner division and Seth Scholl of Holmen, Wis., was dominant throughout the year.

In his 30 starts, Scholl recorded 17 victories with 26 top-fives and a perfect 30 top-ten finishes. His nearest competitor in the top 10 standings had just three wins.

Scholl, 36, is the third different national champ and will net $300 for his efforts. 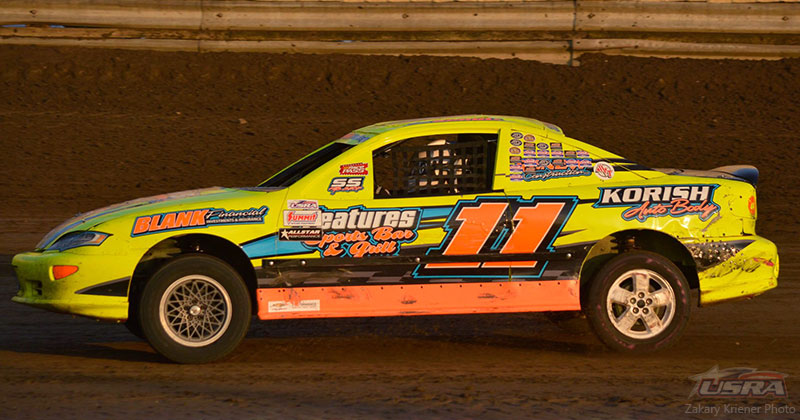 The 2019 racing season marked the debut of the USRA Factor Stocks as part of the Summit USRA Weekly Racing Series and more than 200 drivers competed in USRA-sanctioned events at several tracks in the Lone Star State.

When all was said and done, Josh Landers stood alone at the top as the first ever USRA Factory Stock national champion while also picking up a track championship at the Monarch Motor Speedway in Wichita Falls, Texas.

Landers produced six wins in his 25 starts and the Princeton, Texas, resident recorded 14 top-five and 19 top-ten finishes along the way. The 47-year-old veteran racer will take home $1,000 for his efforts. 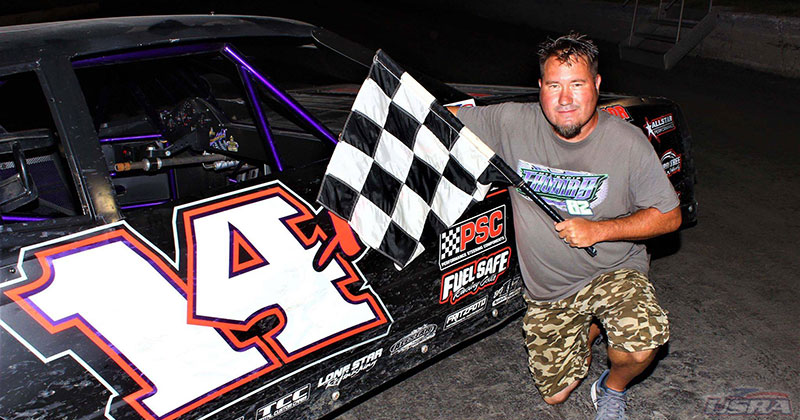 In addition to his fifth-place effort in the USRA Factory Stocks, Tommy Davis Jr. pulled double-duty and claimed the 2019 USRA Limited Mod national championship as the class returned for a third season after being idle in 2018.

Davis, who hails from Wills Point, Texas, held off a strong battle for the top spot from Cory Williams who captured the track championship at the West Texas Raceway in Lubbock. For his part, Davis won track championships at the RPM Speedway in Crandall Texas, and Devil's Bowl Speedway in Mesquite, Texas, en route to nipping Williams by 41 points in the final rankings.

The 43-year-old Davis will fatten his bank account by $1,500 with his stellar title-earning season and as much as $1,000 for his dual track championships. 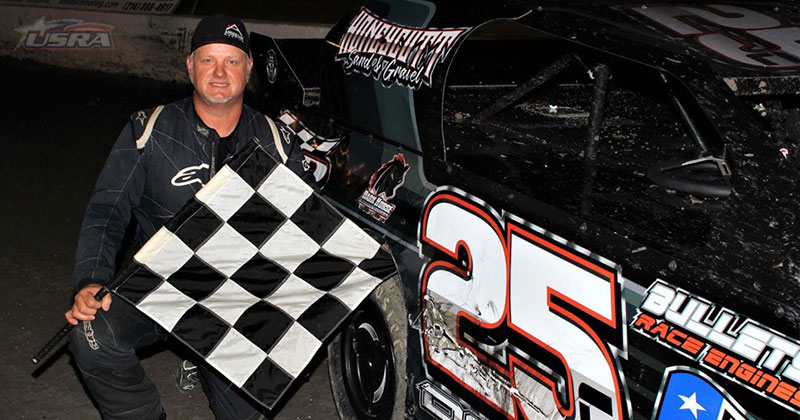 Racers competing in the Summit USRA Weekly Racing Series garnered regional points throughout the season based on their total accumulated track points within each region. The following drivers claimed regional championships in 2019: 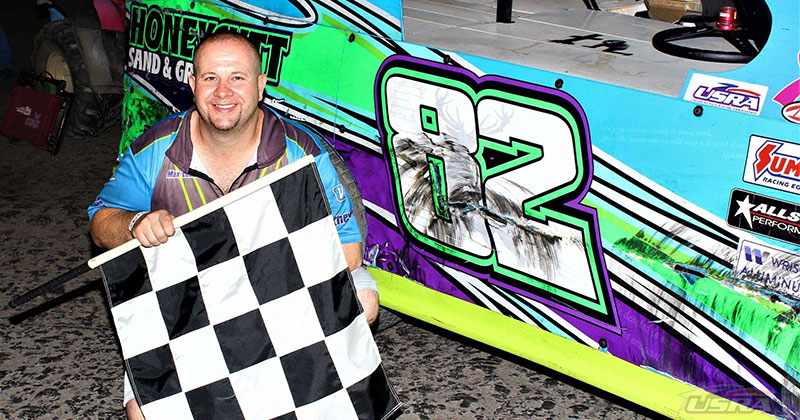 For the fifth straight year, Triston Dycus of Maypearl (formerly Waxahachie), Texas, claimed the title of champion in the Touring Outlaw Modified Series (TOMS) which staged USRA Modified points races throughout the Texas and Oklahoma during the 2019 campaign.

First launched as the Texas Outlaw Modified Series, Clyde Dunn Jr. claimed the first TOMS title in 2014 but ever since it has been Dycus standing at the top of the mountain at season’s end.

Dycus, who turned 43 at the end of November, added two wins to bring his career total to 20 in the 101 races staged by the series at 18 different racetracks in six seasons. 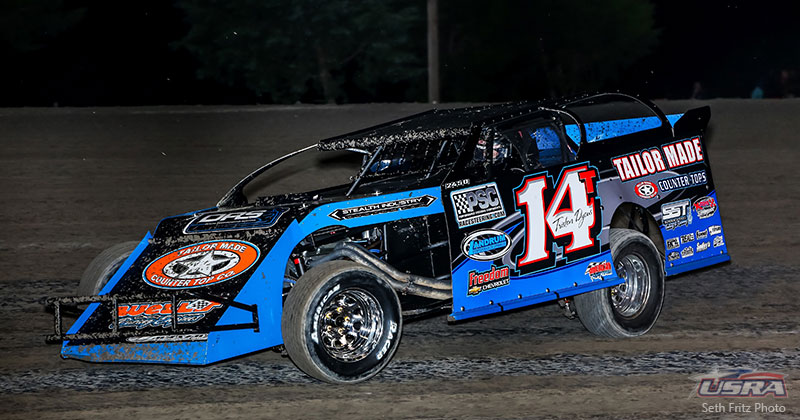 This is Green’s second title in the American Racer USRA Stock Cars after winning it in 2017 also. With two wins in 13 starts, Green ran away and hid in the points battle. Dillon Anderson, Lynn Panos, Mitch Hovden and Kyle Falck completed the top five. 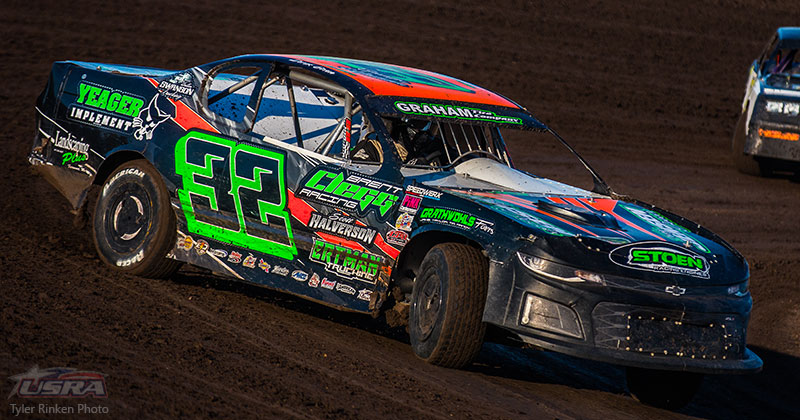 For Boumeester, this is his first national title under the USRA banner as he had his Out-Pace USRA B-Mod dialed in since the opening race of the season, winning two main events while the 37-year-old Gopher State speedster registered 11 top-five and 15 top-ten finishes in his 16 starts over the course of the 2019 campaign. 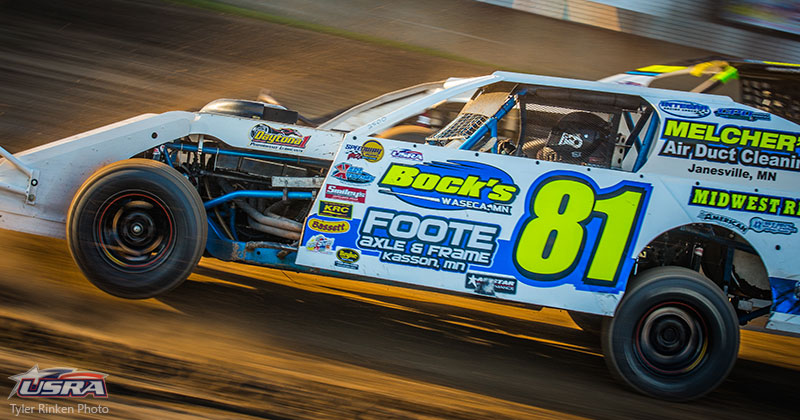 The United States Racing Association will host its annual awards banquet on Saturday, January 25, 2020, at the Ameristar Casino Hotel in Kansas City.

This year’s gala will once again be a joint celebration for the USRA and United States Modified Touring Series (USMTS).

Attendees can call (816) 414-7000 and then press option #1 to reserve a luxurious hotel room at a discounted price. Just mention code “STY2020” when making your reservation.

Individual tickets are $40 each and are on sale now by calling the USRA office at (515) 832-6000 during normal business hours. The deadline to order tickets is Monday, January 6.

In addition to the awards ceremony, the evening’s meal will feature a luxurious and plentiful selection of fine food, plus a huge dessert bar. A cash bar will also be available.

The ceremony will be held inside Ameristar’s 12,000-square-foot Star Pavilion, which serves a multitude of events including corporate meetings, training seminars, trade shows, social receptions and live performances.

Located just east of downtown Kansas City, Ameristar Casino Hotel is an entertainment hub that offers a huge casino floor, nine restaurants, a luxury hotel and 18 movie screens, plus convenient parking in a five-level parking structure with an enclosed, climate-controlled walkway to the casino.

For more information, check out ameristarkansascity.com.