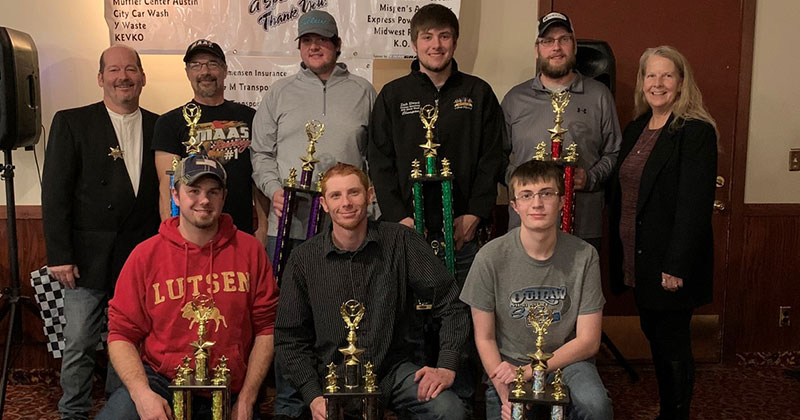 The 63rd anniversary season of racing at Chateau Speedway in Lansing, Minnesota, was officially wrapped up on Saturday with the awards banquet held at Lansing Corners Supper Club. The annual awarding of trophies saw the top five drivers in each of the six full time classes picking up hardware.

The Track took the opportunity to make it a “Toys for Tots” collection night and those in attendance did a great job of bringing something to contribute to the charitable effort.

Final numbers for the season were pretty impressive with 352 drivers and cars competing over the course of the 19 shows that were run. Of those, over one-third of them (126 of them) took home at least one win on the season in a heat race, consolation or main event. Altogether there were 382 races run.

Even more impressive was the fact that of the nine classes that ran either on a weekly basis or during specials seven track records were set. Leading the way was USRA Modified driver Jason Cummins of New Richland who reset the record when he ran the fastest lap of the season—a 15.309-second tour of the track, which comes out to an average speed of 78.384 miles per hour.

Kadden Kath of Owatonna had the fastest lap of the year in the Out-Pace USRA B-Mods, but was still two-tenths of a second slower than the mark set by Troy Hovey of Decorah, Iowa, in 2016.

Among the 33 drivers honored on the night were 12 former track champions accounting for 32 past ritles. So at the end of the night there were 17 champions with 40 titles among them.

A first-time track champion was crowned in the Out-Pace USRA B-Mods as ninth year driver Noah Grinstead of Austin found his way to the top of the podium. the rookie B-Mod racer was in his first full season in the class after running just four nights in the division last year. He had one feature win on the year.

Three-time and defending track champion Kadden Kath of Owatonna picked up the second-place trophy this year. The eighth-year driver had six feature wins and has finished in the top five in points every year. Pure Stock graduate Matt Brooks of Austin finished third in points for the third straight year, recording one feature win during the season. Alex Schubbe of North Mankato, who has never run more than a few shows in any season at Chateau Speedway, ran a full schedule for the first time and finished fourth in points. Kobie Kath of Owatonna, running a full-time schedule for the first time since 2014, finished fifth in points in his third season of racing.

In USRA Modifieds, Brandon Davis of Hayfield won his fourth track championship—his third in the class after also winning titles in 2012 and 2013 after a Midwest Mod championship  in 2010. Davis scored six feature wins in his championship run and was also earned the Favorite Driver Award as voted on by the fans.

Cummins, a four-time track champion, finished runner-up after grabbing four feature wins during the year. Twenty-five-year veteran and two-time track champ Darwyn Karau of Kasson finished third this year after taking the title last season. Jacob Stark of Austin, a former Hornet track champion, grabbed his first top five finish in the Modifieds since moving into the division in 2017. Greg Jensen of Albert Lea rounded out the top five. Jensen has finished in the top five in nine of his sixteen seasons competing here.

The season opener will be May 1, 2020. A test 'n' tune session will be scheduled for Wednesday, April 29. Highlighting the schedule again this year will be the “Spirit of 83 Memorial” which will feature the 22nd Mike Guttormson Memorial. The Memorial Day Weekend event will be on Sunday, May 24, with a 6:00 p.m. start time. The track is looking for 83 sponsors at $83 per sponsor to add to that night’s purse. Interested parties just need to contact the track.

The popular kids car rides and bike giveaway highlight the May schedule as well. The weekend of June 12 will feature Veterans Salute Night. The night leads into Flag Day on June 14. The track will also present their Hall of Fame awards in June. Also highlighting the schedule will be Pack the Stands Night on Friday, August 14. Admission is $5 for everybody.

Back to School Night and Back pack giveaways will be part of the August 28 program. Another Sunday night show will be on Labor Day Weekend. The Labor Day Dash will run on September 6 at 6:00 p.m. Season Championships will be on Friday, September 4. Plans are for the 2020 awards banquet to take place Saturday, December 5, back at the Lansing Corners Supper Club.

Ticket pricing for regular shows during the 64th anniversary season will remain unchanged with $10 adult grandstand admission, $5 for juniors ages 6 to 12 and kids ages 5 and under get in for free. Pit passes will continue to be $25 with ages 6 to 12 just $15 and under 5 free. Special pricing will be in effect for marquee events and will be announced ahead of time. If Mother Nature cooperates, there are currently 23 nights being planned.