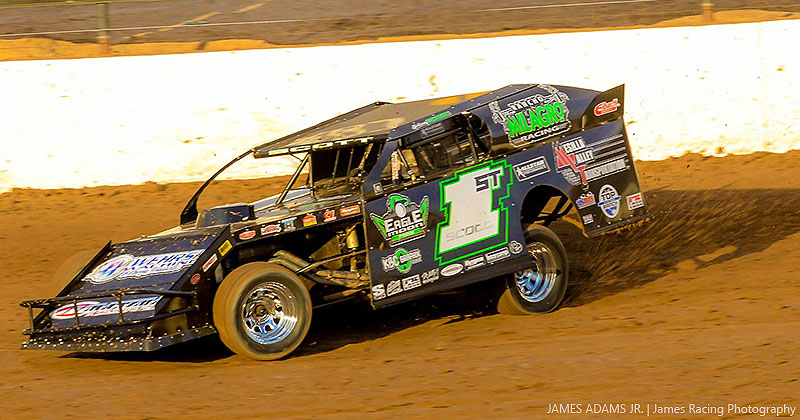 Johnny Scott is the defending winner of the Rancho Milagro USRA Fall Nationals.

The event, presented by S&S Fishing & Rental, Barnett Harley-Davidson and Casa Nissan of Las Cruces, will offer up a top prize of $20,101 to the winner of Sunday’s main event and a minimum payout of $1,500 to every driver who starts the feature race.

The richest in the race’s history, an additional $101 was added to the top spot this in memory of local racer Butch Reid, a USRA Modified competitor, who passed away this past weekend. His car number was 101.

The checkered flag waved for the final time at the Southern New Mexico Speedway last year after hosting the first 19 installments. Another memory of a fantastic race was made at the 3/8-mile clay oval outside of Las Cruces when Johnny Scott found his way to the finish line to collect his second USRA Fall Nationals title and the last person to visit victory lane at the track.

In addition to the headlining Rancho Milagro USRA Modifieds, Hacienda Carpet & Tile USRA B-Mods and Miller Horse Farms USRA Stock Cars will also be on the card each night. Drivers in all three divisions will be battling for precious Summit USRA Weekly Racing Series national points each night.

The track will host an open practice on Thursday, October 24, with gates opening at 5 p.m. and practice from 6 to 10. Pit passes will be $25 (grandstands will be closed).

On Friday and Saturday, gates open at 5 p.m. with racing at 7. All times are two hours earlier Sunday with gates opening at 3 p.m. and racing at 5.

For those unable to attend, the entire event will be broadcast live via pay-per-view at SpeedShiftTV.com.