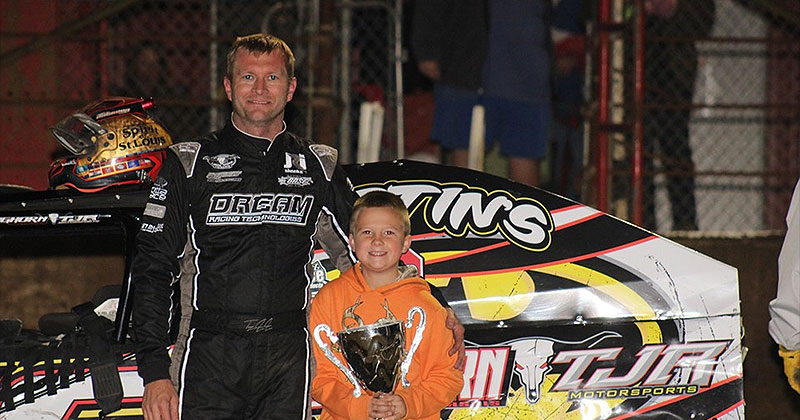 Lebanon's Tony Jackson Jr. filled in for Brian Myers, took the lead from Matt Rose on the seventh lap and proceeded to capture the Out-Pace USRA B-Mod feature Saturday at the 3rd annual Bud Perry Memorial at the Lebanon Midway Speedway.

Jackson and his TJR team had built the Longhorn Chassis during the off-season for Myers, who was injured in a non-racing incident that forced hism to had the steering wheel to Jackson for the $600-to-win event.

With the top six in passing points redrawing, high-point driver and 2019 track champion Dillion McCowan drew the sixth starting spot while Dayton Newell and Matt Rose took the front row with the veteran Rose getting the early lead over Newell with Jackson following close.

The crew had the track in great shape as the facility had suffered an afternoon rain shower around 1:30. The surface was heavy but smooth for the 100-plus cars in the pits.

Rose kept a quick pace as Jackson moved into second on lap three while defending event winner Tyler Knudtson shot to third and McCowan was moving to the top side and gaining spots.

Jackson closed on Rose and took over the top spot on lap 7 in the caution-free feature which took just 4 minutes to run. McCowan shot to second place on lap 8 and was gaining on Jackson but had to settle for second ahead of Knudtson, Rose and Newell.

Summit USRA Weekly Racing Series action continues next Saturday, October 26, with a special Trick-or-Treat Night as drivers will be bringing candy for the kids to trick-or-treat on the front stretch at intermission. Racing is slated to start at 6 p.m.

For more information visit the track's Facebook page or MidwaySpeedway.net.