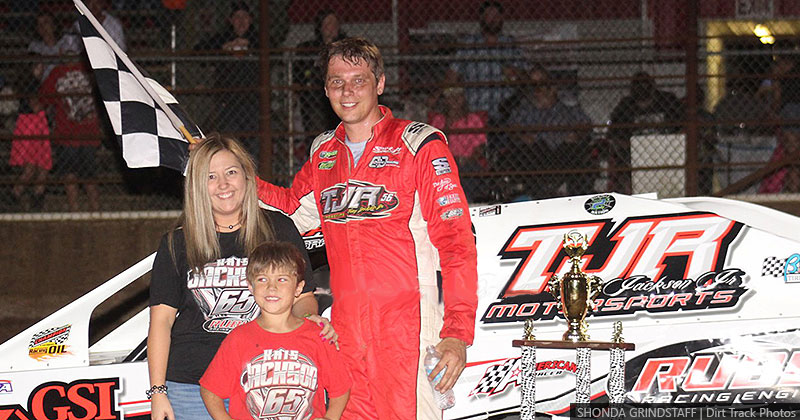 Defending and current Out-Pace USRA B-Mod national champion Kris Jackson of Lebanon took back the lead from the 2016 national champ, J.C. Morton of Springfield, and then survived a five-lap shoot-out with 2015 titleist Andy Bryant of Fort Scott, Kan., and fast-moving Gunner Martin of Independence to capture inaugural TJR Factory 56 before a capacity crowd Saturday night at the Lebanon Midway Speedway.

Despite the remarkable two seasons he has recorded, winning this race on his hometown track was anything but easy.

Thursday night qualifying saw Jackson fail to lock into the feature. He had to compete Friday night in hopes of securing a good starting spot. Jackson won Friday's feature and then won the Pole Scramble between the winners as Ogden, Iowa's Cam Reimers occupied the front row with Morton and Bryant in the second row while the third row saw Terry Schultz of Sedalia and 2018 track champion Sam Petty of Marshfield.

Following alphabet soup-style semi-features, the 20 car field was set for the $5,600-to-win, 56-lap feature. Following a couple of restarts, Jackson shot to the top spot on the opening lap with Morton, Reimers, Schultz and 2019 track champion Dillion McCowan in the top five.

With Jackson and Morton starting to put some distance on the pack, Bryant start forward movement along with Schultz while Nevada's Brantlee Gotschall and Mke Streigel of Wheatland were moving on the high-side. It took until lap 12 before the leaders got to lapped traffic just before the first caution waved.

Schultz retired to the pits during the yellow flag, and Jackson fired on the double-file restart with Morton on his bumper as Bryant gathered third with Gotschall, Reimers and McCowan mixing it up behind them.

On lap 16, Morton shot around Jackson to take command as Streigel had closed ground and was coming quickly while "B" feature winner Jake Richards of Lansing, Kan., was knocking on the door for a top five spot and bringing Martin with him.

Morton's ten-car-length advantage was starting to shrink as Jackson moved around on the track looking for more speed. He found it in the middle lane and then a lap-27 caution bunched the pack again.

Morton shot perfect on the restart as Jackson, Bryant, Striegel, Gotschall and Richards were battling for the other spots. After two laps of looking for the lead, Jackson made the pass on lap 38 as Stilwell,  Okla., veteran Eddie Martin was on the move when caution waved with 45 or the 56 laps complete.

As the green waved to get back underway, Morton was searching when he spun in turn 2 to bring out the yellow flag, forcing him to rejoin the race from the rear of the field with all 19 remaining cars still on the lead lap. Under caution, however, Morton made the turn to pit row, ending his night.

On the restart, Bryant went to the top side and was leaving nothing on the table. Jackson launched off of turn 2 and began to pull away, eventually crossing the finish line first with Bryant securing the runner-up spot. Martin battled his way around Richards to round out the podium and McCowan came home fifth.

Eighteen of the 20 starters finished on the lead lap of the action-packed, start-studded main event, with plans already being made for next year's show.