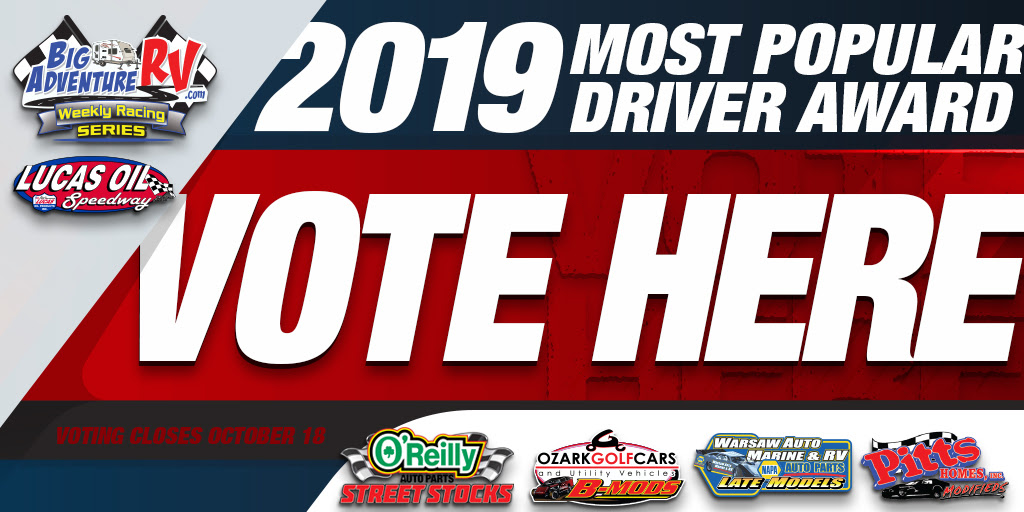 It's that time of the year again and the polls have opened for fans to select the most popular driver from the Lucas Oil Speedway Big Adventure RV Weekly Racing Series.

From now through October 18, fans can go online and cast their vote for a driver from any of the four weekly classes, including the Summit USRA Weekly Racing Series competitors in the USRA Modified and Out-Pace USRA B-Mod divisions.

There's even a place for a write-in vote if your favorite driver is not listed. One vote per email address is permitted.

The winner will be announced at the annual Lucas Oil Speedway post-season awards banquet in November.

"This is a fun award that we came up and one that I think the fans enjoy being involved in the process," Lucas Oil Speedway General Manager Danny Lorton said.

The entire program on Saturday will be recorded and shown, at a later date, on "Lucas Oil Speedway Saturday Night Racing" on MAVTV Motorsports Network and LucasOilRacing.TV.

For questions about tickets or camping for any event at Lucas Oil Speedway, contact Admissions Director Nichole McMillan at (417) 282-5984 or via email at nichole@lucasoilspeedway.com.