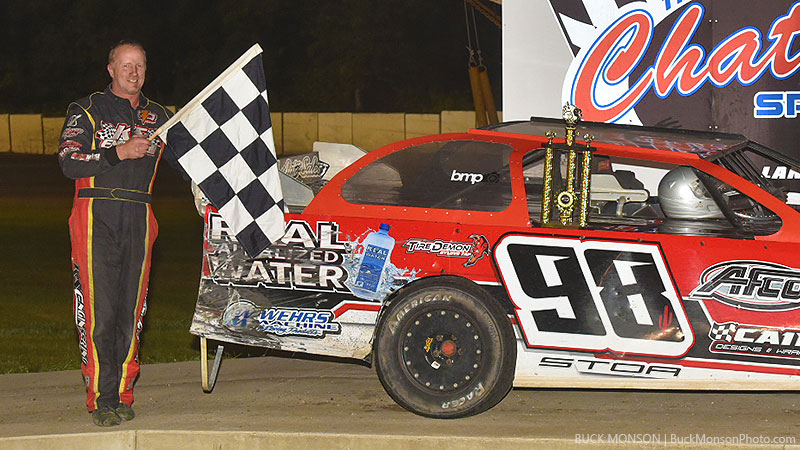 Season champions were crowned in seven classes Friday at the Chateau Speedway as the regular season came to a close. It was also Back to School Night with the Austin Jaycees giving away two dozen backpacks. The night's program, sponsored by Duffy’s BP of Austin and Meadow Greens Golf Course, saw more of the side-by-side and three-wide action that have made fans sit on the edge of their seats week after week.

The second feature to pull onto the track was the Out-Pace USRA B Mod main event. Coming into the night, Noah Grinstead of Austin held a 32-point lead over Kadden Kath of Owaton. This was another case of a driver seeking his first title against a multi-time track champion. Kath has won the championship in the class three times, including the past two years. His other title was in 2013.

With 13 cars entered for the feature and the difference between first and last being 34 points it was not a forgone conclusion and on lap 2 it almost turned completely around. Grinstead was in the middle of the field when some contact had him slowing in the middle of the field of cars and the caution flag came out while he limped into the pits with a flat tire. His crew got it changed and got him back out just as the field was getting the one to go sign.

Restarting in the back he got ahead of a few cars right before the first of the night's two roll-overs occurred. Brothers Brody and Gavin Shaw of Brownsdale were involved in the incident with Brody Shaw ending up on his top in turn 2 and Gavin Shaw sliding into him. Both drivers were unhurt but the cars are going to require plenty of work to get back on the track.

With all the excitement going on in the back half of the field, Matt Brooks of Austin was led lap after lap en route to his second career feature win at Chateau Speedway. Scott Demmer of Ellendale out-dueled Kath for second. A.J. Hoff of Mantorville took fourth followed by Kobie Kath of Owatonna.

Hoff and Kadden Kath had the heat wins. 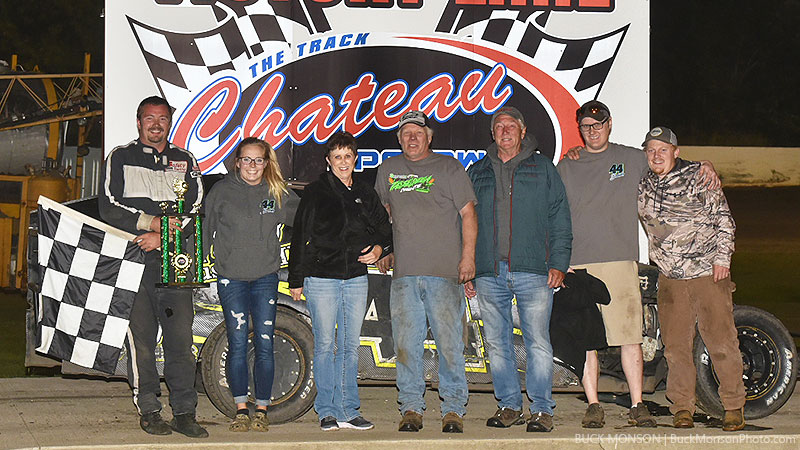 A 55-point lead is pretty safe going in to the final night of the points season, and that’s where Brandon Davis of Hayfield sat in the USRA Modified class. Davis was after his fourth track title after winning the Modified crown in 2012 and 2013, and the Midwest Mod class in 2010. To take the title he would have to hold off four-time USRA Modified track champion Jason Cummins of New Richland who took his titles in 2010, 2011, 2016 and 2017.

With the car count, he just needed to take the green in the feature and avoid a disqualification to take the crown but he and a couple other drivers put on one of the best shows of the year. Hoff, who was pulling double duty, led the early laps of the race until Kevin Stoa of Albert Lea went to the front on lap 7 of the 25-lap feature, running all the way on the top rail.

Joel Alberts of Mantorville, who picked up his first Chateau Speedway feature win last week, moved into second behind Stoa and made several runs at the lead as the two spent much of the next five laps side by side. A couple laps later they were joined by Davis and the final 10 laps of the race were some of the best racing to be found.

The trio was running sub-17-second laps at average speeds of more than 70 miles per hour, and ran two- and three-wide several times. Stoa was shown the leader lap after lap but one lap he would be looking out the side of his car at the orange No. 4A of Alberts and the next lap he would see the black No. 50 of Davis, and then they would be three wide and giving each other plenty of room to race.

Second place changed hands lap after lap but Stoa’s No. 98 stayed atop the leaderboard all the way to the checkers. Davis ran second at the end, just ahead of Alberts with Hoff and Keith Tourville of Janesville the rest of the top 5.

That, however, does not mean that the racing season is over at the track, which hosts the Labor Day Duel on Sunday featuring USRA Modifieds, Out-Pace USRA B-Mods and four other classes. Grandstand tickets will be the regular season admission price of $10 for adults, $5 for juniors and kids 5 and under free. Race time is 6 p.m.