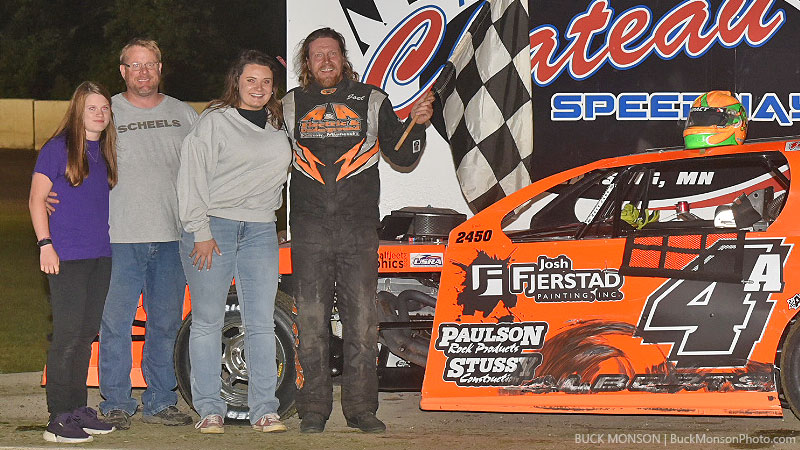 Fans were treated to more of the wild three-wide racing Friday they have grown accustomed to. It was a picture perfect for the night's program sponsored by Zumbrota Ford with temperatures in the 70s and some nice white fluffy clouds floating over the trees along the back straightaway along the Cedar River as the nights action got underway. Adding to the beauty of the night was the celebration of two drivers picking up there first career Chateau Speedway feature wins.

Jett Sorensen of Rochester, who made his debut in the Out-Pace USRA B-Mod class at Chateau Speedway in 2016, has been hunting that first feature win and Friday night he found it. Sorensen drew the pole position for the main event and out-drove current points leader Noah Grinstead of Austin into turn one to grab the early lead.

Grinstead gave up second to Kadden Kath of Owatonna on lap 2 and settled into third. Kath, who has five feature wins at the track this season, drew a bead on Sorensen, staying within striking distance lap after lap but Sorensen held his line and drove all the way to victory lane for his first feature win.

Sorensen was greeted by his dad and former two time track champion Bobby Sorensen for a victory celebration. The race was one of two caution-free features on the night. Kath settled for second ahead of Grinstead while A.J. Hoff of Mantorville came home in fourth followed by Mark Motl of Owatonna. Motl and Kobie Kath of Owatonna claimed the classes heat wins. 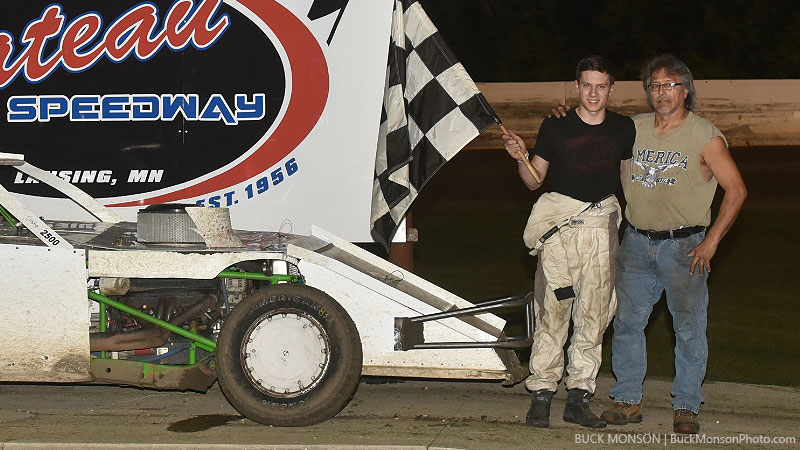 The USRA Modifieds showed they know how to keep a feature clean as well as they rolled off 25 caution-free laps with Joel Alberts of Mantorville claiming his first Chateau Speedway feature win. Alberts jumped from row 2 to the front on the first lap and proceeded to stretch out a pretty nice lead.

Jason Cummins of New Richland worked out of row 4 up to second on lap 7 and attempted to reel in Alberts but it was not to be. Joe Horgdahl of Kasson held off Brandon Davis of Hayfield for third with Mark Noble of Blooming Prairie coming home in fifth.

Noble was coming off his big feature win last weekend in the Big Rig Bandit Series in Kalamazoo, Michigan. Horgdahl and Cummins had the classes heat wins.

The 63rd anniversary season at Chateau Speedway still has plenty of action on the schedule for the next month but after Friday night's racing action just one week is left to decide the 2019 track champions. Next Friday is Season Championship Night at 7:15 p.m. but that’s just the first race of a big Labor Day Weekend. The track will also be hosting a Labor Day special on Sunday night at 6 p.m. with an increased purse including a $1,000-to-win USRA Modified feature event.

More details on the specials can be found at chateauspeedway.com.