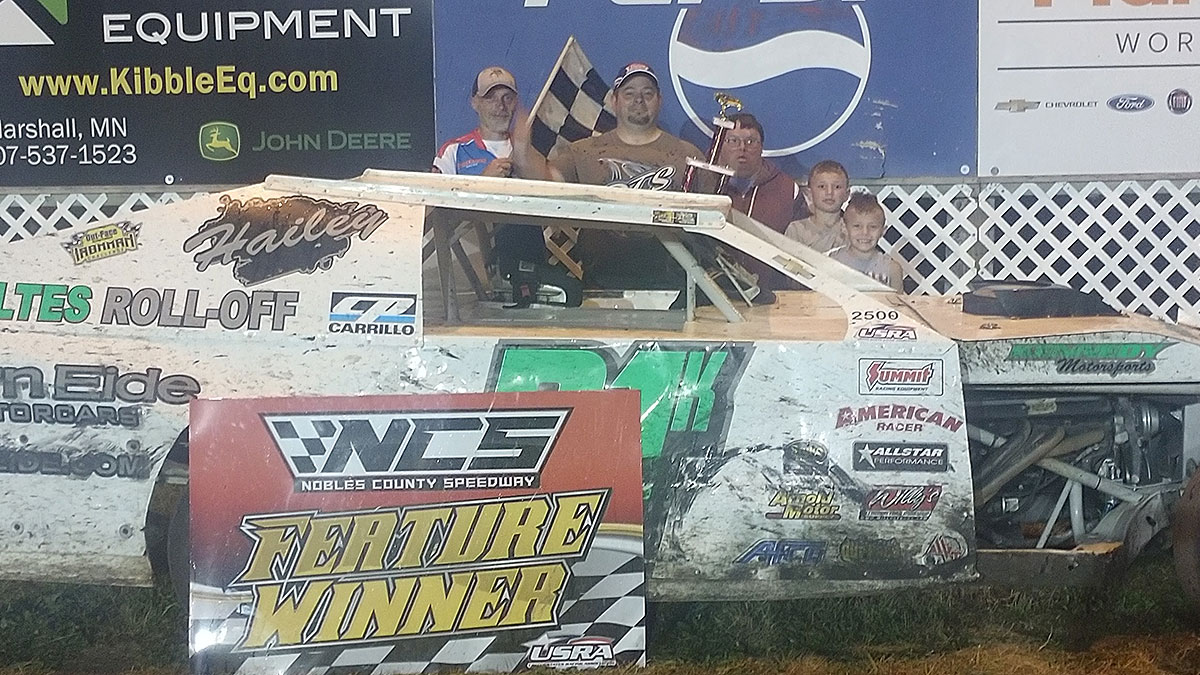 Dave Kennedy of Sioux Falls, S.D., won the final tune-up race heading into this weekend’s United States Modified Touring Series and Arnold Motor Supply Iron Man Challenge at Nobles County Speedway. Kennedy more or less dominated the Out-Pace USRA B-Mod feature Saturday night giving him two wins in a row. Bob Gilliland was second. One of the feel-good stories of the race was Corbin Erickson’s third place finish. Erickson came from ninth and passed Clint Erickson on the final lap in one of his best races to date.

Defending American Racer USRA Stock Car title holder Luke Sathoff was up to his usual tricks come feature time. After missing his heat race, Sathoff mowed down the entire field in exciting fashion during the main event, including Jon DeBoer who lead most of the race. Sathoff’s win was his fifth. That’s the most among all drivers who have raced in any of NCS’s divisions this year. Points leader Darrin Korthals crossed behind DeBoer in third.

Brandon Nielsen of Spencer, Iowa, fought tooth-and-nail with Justin Luinenburg to decide the Cook Racing Supplies USRA Hobby Stock feature. Luinenburg led several laps while the rest of the top five created some thrilling action. Among them were Nielsen, Tyler Lursen, Nick Schilling and Dan Strandberg. After Nielsen fought his way through the pack, he and Luinenburg raced side-by-side for a couple of laps before Nielsen claimed the point and the checkers. Lursen was third, Schilling fourth, and Corey Gronewold also snuck into the top five.

Scott Espey outlasted Bubba Brown to win the USRA Tuner main event. A mishandle by Brown sealed the deal for Espey who won his third feature. He leads Gary Grabill by 57 points in the standings.