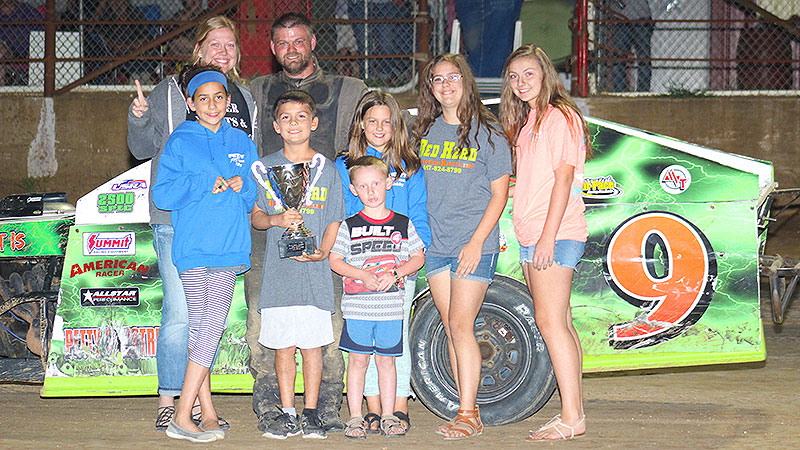 Veteran racer Sam Petty is ready for the 2019 Lebanon Midway speedway racing season as he enters Friday night's action with the 2018 track champion title in the Out-Pace USRA B-Mod division.

Petty enjoyed his finest season yet in his racing career in a Modified-type car in 2018. A track championship, he stayed around the top 10 in the Summit USRA Weekly Racing Series national standings until the last couple of weeks, finishing 13th in final points with six feature wins.

He showed consistent running in the front pack all season long. Starting last race season, Petty set his goals to run up front weekly at all the tracks, win some races and finished in the top 15 in the national points. Goals were met and the green John West Logging/Mac's Performance Power Train Industries/Shaw No. 9 from the small town of Niangua, Mo. was showing everyone he was hitting stride while still learning from the area's top drivers.

"We really hit the national points chase pretty hard last year and competed in just over 40 races," Petty said. "(We) had to compete almost every week against national champion Kris Jackson, Donnie Jackson, up-and-coming Tyler Knudtson, defending champion Tyler Brown and many others while still on that learning curve.

"I like competing against the tough competition. It makes you work harder, keep up on the car and chasing or being right with them not only keeps you in the right mind set, but also you learn at the same time."

The youngest of the three racing Petty brothers, Sam likes to call Midway his home track, and he has always had pretty good luck at Midway.

Petty won a drawing one season for drivers with perfect attendance (over 13 drivers) for a trip to Las Vegas and since he joined the Out-Pace USRA B-Mod class a few seasons ago, he has been a threat to win weekly.

In 2017, during the Fall Season, he finished seond to Tyler Brown in the points standings, won the inaugural Bud Perry Memorial and captured a couple of features during the Spring/Summer Series but had some mechanical issues causing him to miss a few races.

For 2018, it was a total focus on being ready and prepared when he pulled into the track and really improved his maintenance program. No easy task especially since he helps other drivers get their cars ready from the hometown area.

"The track has been in great shape the last two seasons. Our overall car counts in the classes are going up and the atmosphere around the track really shows a family effort with some of the things they do.

"We had a great run at Monett (a bigger track) with a second-place in the 4-State event in my only race there this last season and we have just about grabbed a couple of wins at Springfield. We prefer the smaller type tracks and like a smooth surface, it fits our style. During the 4th of July weekend there was a lot of USRA points events, so I used some of my vacation time from Wal-Mart to hit the races. My wife and children are great supporters of the racing program and are at almost all of my races."

The Lebanon Midway Speedway will begin the chase for the championship this Friday, April 5, with Out-Pace USRA B-Mods plus Street Stocks, Midwest Modifieds, Pure Stocks, Hornets and the new Kidz Cruiser class.

Adult pit passes are only $30 with adult grandstand admission $12 with discounts for military and seniors.