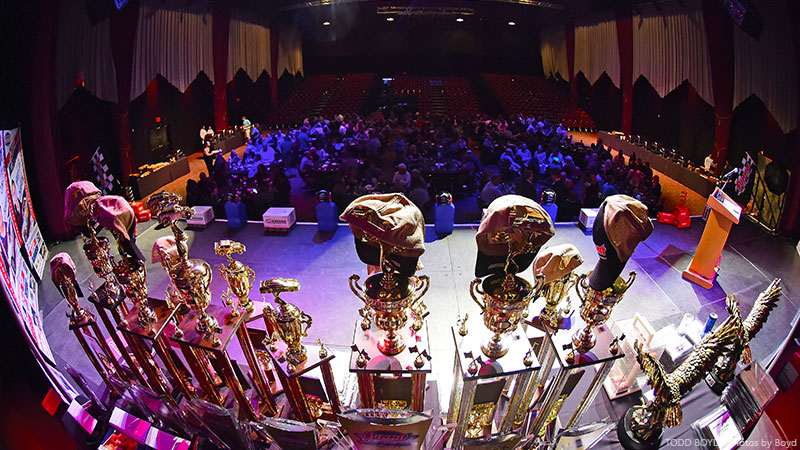 Competitors in the Summit USRA Weekly Racing Series were honored Friday night inside the Star Pavilion during the annual USRA Awards Banquet at the Ameristar Casino Hotel in Kansas City.

Among those in the spotlight were six national champions, 10 regional champions, 58 track champions and a trio of special series champs, along with several special recognition awards.

Fuqua, Jackson and Bryant emerged as first-time national champs while Hofer earned his second title in as many seasons. Meanwhile, Hovden and Gulbrandson claimed a record-setting fifth crown in their respective classes.

From early spring until early fall, everybody was chasing Darron Fuqua in the USRA Modified division—and they never caught him. Chalking up 18 feature victories among his 29 top-five finishes in 34 starts, the 33-year-old from Mayetta, Kan., set sail with numerous wins early on and kept his foot on the gas all the way to the finish line in netting his first national title.

Fuqua, who won the USRA Modified feature in 2015 at the Summit Racing Equipment USRA Nationals, added a track championship at the Lucas Oil Speedway in Wheatland, Mo., en route to becoming the first driver from the Sunflower State to capture the USRA Modified national crown. He is the 12th different champion in the 14 years that the USRA has named a national champion in the division. 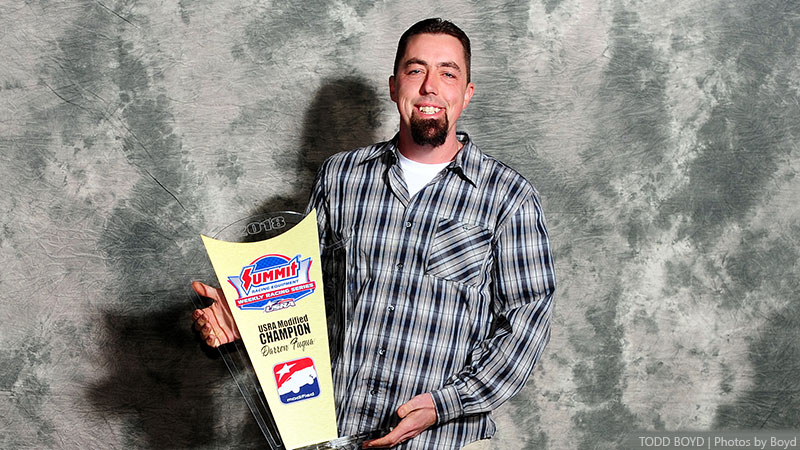 C.A. Nix of Lawton, Okla., had another strong season at his hometown track and the Southern Oklahoma Speedway in Ardmore, Okla., as well as the Touring Outlaw Modified Series where he finished fourth in the series standings, but had to settle for runner-up honors for a second straight year.

Mount Ayr, Iowa’s Dennis Elliott parlayed a track championship at the I-35 Speedway in Winston, Mo., into a third-place finish in the national points after winding up tenth last season while Texans Troy Taylor and Wendall Bolden rounded out the top five points-earners. Bolden was also named the USRA Most Improved Driver of the Year.

Hovden, who claimed his other titles in 2016, 2015, 2012 and 2011, won the track championship at the Fayette County Speedway in West Union, Iowa, and finished second at his home track Upper Iowa Speedway. Only finishing outside of the top-five in four of his 32 starts, Hovden put a bow on his championship by winning his 16th main event of the year at the Summit Racing Equipment USRA Nationals in October.

Now the most decorated driver in USRA history, Hovden lays claim to eight titles in all. He captured the Iron Man Challenge points championship in 2013 and 2014, with his first USRA points title coming in 2007 in the Cook Racing Supplies USRA Hobby Stock class. 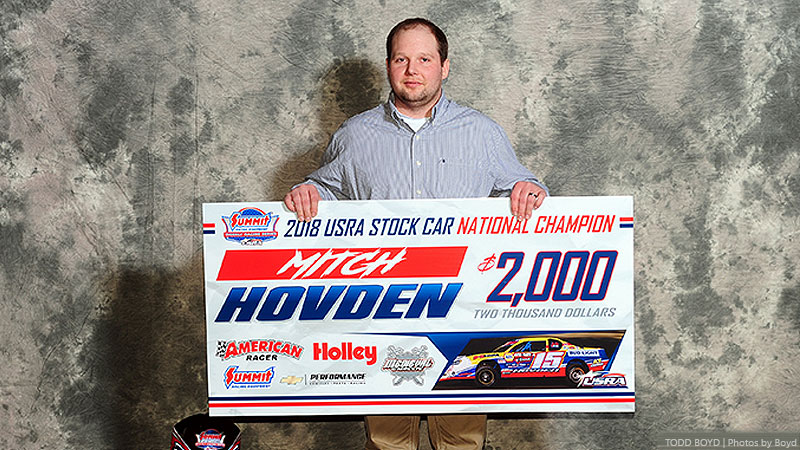 Donavon Flores of Las Cruces, N.M., captured the title in 2013, finished third behind Hovden and defending champ Elijah Zevenbergen last season and improved to a runner-up finish this year while Brett Heeter also jumped up one spot to claim third in this year’s final standings.

Heeter, who hails from the Kansas City area and followed the Arnold Motor Supply Iron Man Challenge series most of the season, was honored as the USRA Sportsman of the Year.

Kris Jackson has more than 70 feature wins in the Out-Pace USRA B-Mod division during the past three seasons, but several near-misses left him without a Summit USRA Weekly Racing Series national championship until this year.

In 2018 he left no doubt, capturing 29 checkered flags (the same total as last year’s champ, Ryan Gillmore) with an astounding 44 top-five finishes in 48 starts. Three of those wins came during each of the three nights of last year’s Summit Racing Equipment USRA Nationals.

After finishing fifth in 2017 with 17 wins and fourth in 2016 on the strength of 25 wins, the Lebanon, Mo., speedster led most of the way in 2018 despite solid performances by his pursuers, and his efforts also earned him the USRA Driver of the Year Award among all competitors. 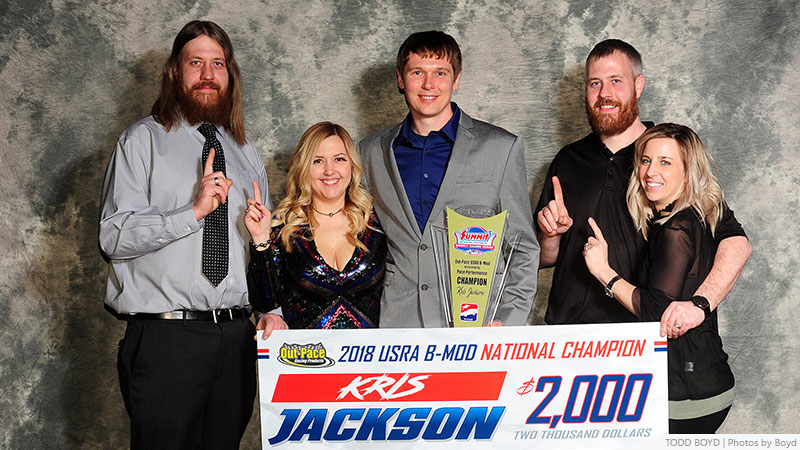 Andy Bryant of Fort Scott, Kan., wound up second in this year’s final tally. Bryant captured the Out-Pace USRA B-Mod title in 2015 and followed that up with the Iron Man Challenge championship in 2016. He nipped defending Iron Man champ Dan Hovden of Decorah, Iowa, by 13 points to secure a second-place finish in this year’s national points chase.

The 2018 Cook Racing Supplies USRA Hobby Stock national championship hardware is heading back to Sioux Falls, S.D., where it has resided since the end of the 2014 racing season.

It was the fifth straight title for Dustin Gulbrandson who produced another banner season with 17 wins. His 51 starts were 10 more than that of the next highest Hobby Stock racer.

While his five national titles in a single division ties him with Mitch Hovden’s five in the Stock Cars, Gulbrandson’s five straight extends a record streak he set last season. Only one driver, Matt Jones, has won three straight—a feat he completed in the Out-Pace USRA B-Mod class from 2007-2009. 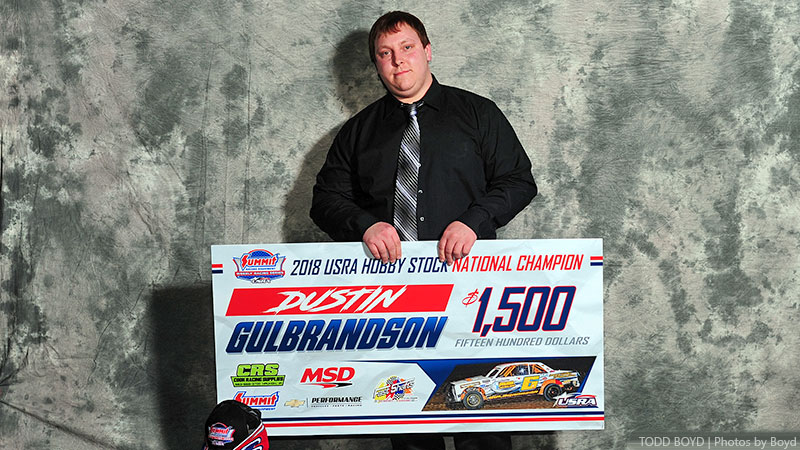 Track championships at Mason City and the Hamilton County Speedway in Webster City, Iowa, put Eric Stanton of Carlisle, Iowa, solidly in the runner-up position in the final Cook Racing Supplies USRA Hobby Stock national points, and the ‘Tall Cool One’ took home the USRA Newcomer of the Year Award as well. 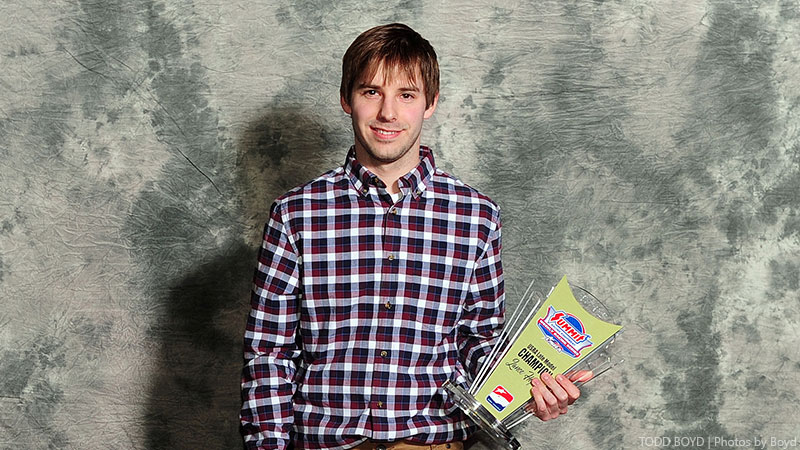 The 2018 season was also the second in a row for crowning a national champion in the USRA Tuner division, and Mason City, Iowa’s Ryan Bryant won the title going away. With a division-best seven wins in 23 starts, Bryant secured track championships in Mason City and Webster City while keeping national runner-up Brad Mayland of Britt, Iowa, in his rear-view mirror most of the way.

Racers competing in the Summit USRA Weekly Racing Series garnered regional points throughout the season, based on their total accumulated track points within each region. The following drivers claimed regional championships in 2018:

Three drivers also scored titles in special USRA-sanctioned series. For the third straight year, Triston Dycus of Waxahachie, Texas, claimed the title of champion in the Touring Outlaw Modified Series (TOMS) which staged USRA Modified points races throughout the South during the 2018 campaign. 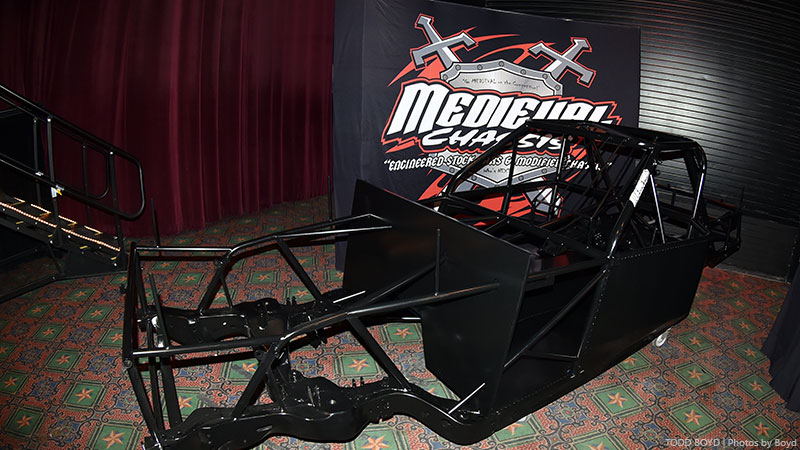 Promoters Mike and Kyle Johnson from the I-35 Speedway in Winston, Mo., were named the USRA Track of the Year. Other special awards went to Cook Racing Supplies USRA Hobby Stock racer Eric Stanton as the USRA Newcomer of the Year Award winner and defending out-Pace USRA B-Mod national champ Ryan Gillmore was named USRA Rookie of the Year in the Modfiied division.

This year’s celebration was once again be a joint effort for both the USRA and United States Modified Touring Series (USMTS).

The Arnold Motor Supply Iron Man Challenge kicks off the 2019 campaign with the Summit USRA Frost Busters—a three-night, three-track swing through three states. Action begins Thursday, March 28, at the Salina Speedway in Salina, Kan., and then moves to the I-35 Speedway in Winston, Mo., on Friday, March 29, before wrapping up Saturday, March 30, at the Hamilton County Speedway in Webster City, Iowa.