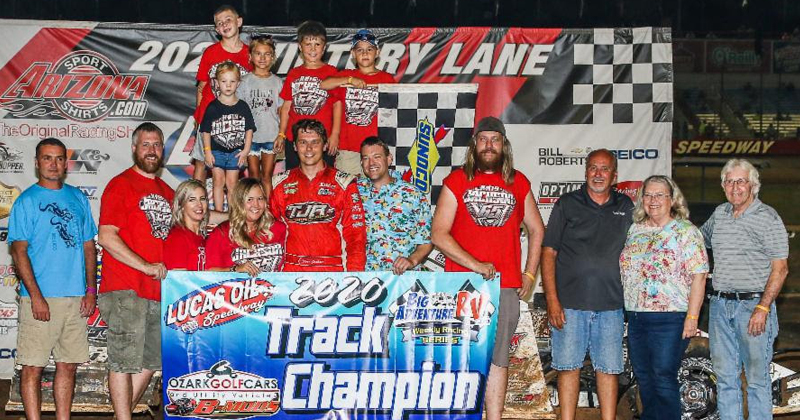 When comparing his fifth Lucas Oil Speedway track championship to the others, Kris Jackson does not hesitate to call his latest perhaps the hardest-earned.

“It seems like we were really good one week and really bad the next,” Jackson added. “But overall, it was good enough.”

Good enough, but just barely and not without drama. Jackson entered the final night of the regular season with a seemingly comfortable 42-point lead over J.C. Morton, needing only to finish 16th or better in the feature to clinch. But a broken 25-cent distributor pin nearly proved disastrous.

“I thought we lost the championship right then,” Jackson said. “When we pulled off (with 10 laps remaining) I was in 17th and assumed we weren’t going to win the championship. But (Eric) Turner beat Morton, so it all worked out.”

“That’s pretty good,” Jackson added of Lucas Oil Speedway title number five. “Based on the caliber of cars there, that’s pretty exciting to be able to do that. I’m really proud of it.”

It also was another stellar year in the Summit USRA Weekly Racing Series USRA B-Mod national standings where he captured 18 feature wins in 53 starts with 40 top-five finishes. But some of those bad weeks Jackson spoke of cost him a third straight USRA national crown.

He finished a mere 23 points behind 17-year-old Jim Chisholm of Osage, Iowa.

“We gave it all we had,” Jackson said. “I think we traveled 5,000 miles in five weeks in one stretch, going different places and racing. Just lots of crashes and things. I don’t know if it was bad luck, bad timing, bad decision-making or what. It just wasn’t gonna happen this year.

“I had more (misfortune) this year than I probably had the last three years combined.”

One thing that has Jackson excited about 2021 is the move of the Summit USRA Nationals to Lucas Oil Speedway next October. The multi-day racing festival, where the nation’s top USRA competitors in several divisions converge, has been held in Iowa the last couple of years.

“We’ve traveled for that race several times. I like to travel, but there’s nothing I like more than stay around home and race—and race for good money at that,” Jackson said. “I’m ecstatic about that coming to Wheatland. Plus, we might have a little home field advantage.”

Wherever the 36-year-old Jackson goes, he will be the man to beat. It’s something he’s become accustomed to in recent years, but has begun to take a new approach. Jackson has started to offer advice to select drivers in setting up their cars, particularly 16-year-old Dillon McCowan of Urbana.

“Dillon McCowan beat us several times. Helping him has cost us, as we ran second to him a few times and that probably cost us a couple of wins,” Jackson said. “But, if there’s not competition in racing it’s not near as fun. The more competition, the better for me.

“It’s easy to get down in the dumps when you don’t win as often as you’d like, but it’s also fun to race very competitively and tight.” Jackson plans to return in his 2020 Rage chassis that be debuted over the summer. The goals remain the same.

“We won’t race quite as much as we did. I think we raced 55-60 times this year,” he said. “I think we’ll probably back it down to where we race 45-50 times and run for some points and do everything we want to do.

“I don’t really set out to run for points, but it seems like I’m always in the thick of it and I get wrapped up in it. So might as well say I’m gonna run for points and not worry about it.”

Season passes, gift cards available: Season passes for the 2021 season are available now and those who had them in 2020 can renew at a $50 discount through the end of the year. Contact Admissions Director Nichole McMillan at (417) 282-5984 or email her at nichole@lucasoilspeedway.com for more information.

Meanwhile, Lucas Oil Speedway gift cards also are available, in any dollar amount. They can be redeemed in any department at the speedway or used toward tickets for any event on next year’s schedule.