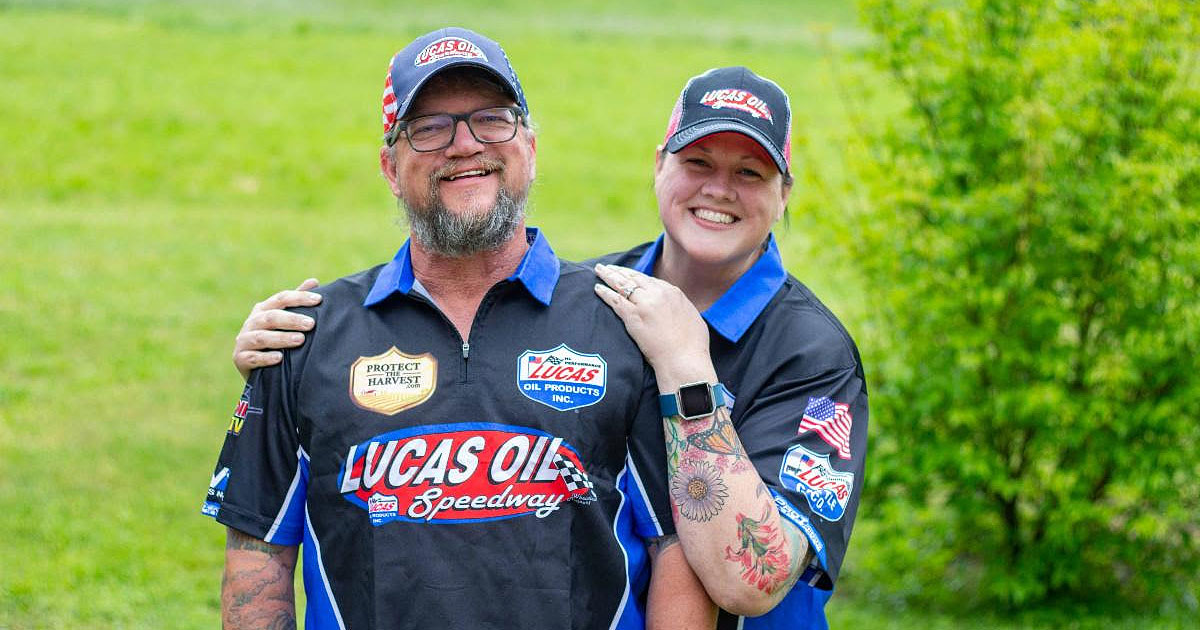 Greg and Stacy Stanek met, cameras in hand, six years ago while on assignment at St. Francois County Raceway. Little did they know at the time, but that shared love of racing photography would eventually lead to marriage.

Now it's led to Lucas Oil Speedway where the Staneks are the new track photographers.

"We are thrilled to welcome Greg and Stacy to our team," Lucas Oil Speedway Danny Lorton said. They replace Kenny Shaw, who resigned after three seasons as the official photographer for the speedway.

"We hated to see Kenny decide to step away, but understood his decision to spend more time at home. But we know Greg and Stacy will be outstanding and look forward to having them with us."

Greg Stanek, a native of southern Illinois, said he began going to the races at the age of six and instantly fell in love with the sport. He took his first photos at the races in 1983 after his mother bought him a camera for his 16th birthday.

"I took it to the track one night just to play around with it from outside the pit fence," Stanek said. "Later that summer, it dawned on me that it was my ticket to get into the races for free. I started shooting for the local newspaper. I did that for two years, until I got out of high school."

It was on a racing assignment in 2014 at St. Francois County Raceway that he met Stacy, a Texas native, and the two hit it off. They moved from the St. Louis area to Bennett Springs near Lebanon a couple of years ago. Greg had been coming there to trout fish since 2004. Meanwhile, he attained media credentials to Lucas Oil Speedway for the first time in 2015, shooting several races there that year and in 2016.

Stanek was offered the track photographer's job before the 2017 season, but turned it down because the couple still lived in St. Louis. He didn't figure the opportunity would come around again, but eagerly accepted when Shaw decided not to return for 2020. Now he and Stacy will get to shoot a dream job together.

"To say I was understated when I got the email from Danny offering the job would be an understatement," Greg Stanek said. "I was really bummed that I had to turn it down the first time. It's hands-down my favorite track I've ever been to and I've been to a lot of tracks in my time."

Greg and Stacy cover a lot of ground, often shooting from different ends of the track and getting unique perspectives of the action. Greg said Stacy is more proficient at getting people shots in the pits or grandstands.

"Even if you see us shooting from the same location, you won't get exactly the same picture because my eye is different from his," Stacy said. "We mix it up. I like turns one and two, he likes turns three and four."

Added Greg: "I love racing and it's my ticket into the races. The clincher is getting to be on the infield. I have the best seat in the house, after the drivers, right in the middle of the action. I just love racing—and I also have racing to thank for meeting my wife."

Fans can check out and purchase the Staneks work at GSStanekRacingPhotography.smugmug.com or on their Facebook page. They also operate the OzarkMotorsportsReport.com website, a roundup of area and national racing news that also features their photos.

Opener set for Saturday: The Big Adventure RV Weekly Racing Series opener is set for Saturday. The program is presented by Ozarks Coca-Cola/Dr Pepper Bottling Company along with OzarksFIRST.com.

Spectators are allowed to attend the program, with social distancing measures in place.

In light of COVID-19 precautions, social distancing of 6 feet will be required for spectators, though families are allowed to sit together. Fans should leave at least one space between vehicles in the parking lot. Masks are not mandatory but are recommended and the speedway will offer disposable masks at the gate while supplies last. Hand sanitizer stations will be located throughout the facility and restrooms will be sanitized frequently throughout the racing program.

Entries are limited to 30 in each division with the USRA Modified and B-Mod classes already filled.

For ticket questions or information for any event this season, contact Admissions Director Nichole McMillan at (417) 282-5984 or email her at nichole@lucasoilspeedway.com for more information.