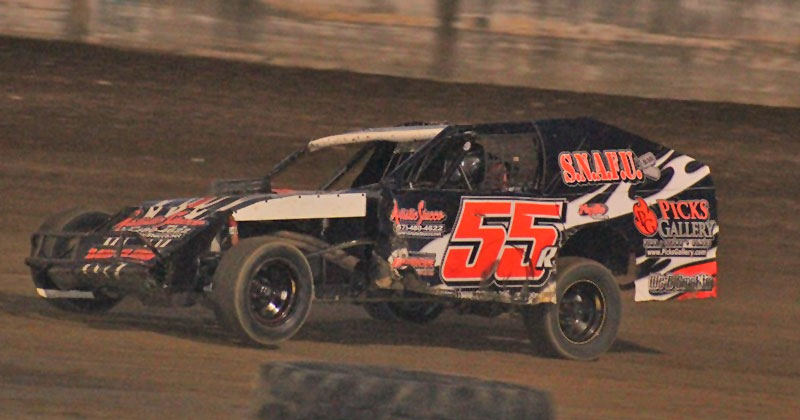 Earl Roark made his first Out-Pace USRA B-Mod start worth his while Saturday night at the Lebanon Midway Speedway as he took over the lead on lap 3 when leader Sam Petty spun in turn 4, and then held back repeated charges from Chad Staus and Tyler Knudtson in topping the 15-lap feature.

It was 2018 track champion Sam Petty who fired from the pole after a two-row inversion set the field. Petty took the opening lead with Roark hot on his heels while Knudtson and Staus were close behind. On lap 2, Petty spun in turn 4 which slowed the pace and placed Roark to the lead.

The restart saw Knudtson and the hard-charging Staus back and forth as Roark held a four-car-length advantage with a long green flag run. On lap 8 at the crossed flags showing halfway, Staus moved smoothly around Knudtson and closed on the leader.

A scary moment at lap 13 as Petty, who was racing with Donnie Jackson for fourth place, had a J-bar break and Petty went into a barrell-roll in turn 1 while running the top cushion. He was able to walk away from a destroyed car. This set up a two-lap shoot-out as Staus kept the pressure on Roark but Roark claimed his first win here followed closely by Staus, Knudtson, Jackson and Bill Schaar.

Hot laps are at 5:40 with the pit gates set to open at 4. The grandstands open at 5 and draw cut-off is 6 p.m. Grandstand adult admission is only $20 with pit passes $35 for adults.

For more information visit the track's Facebbok page or MidwaySpeedway.net.