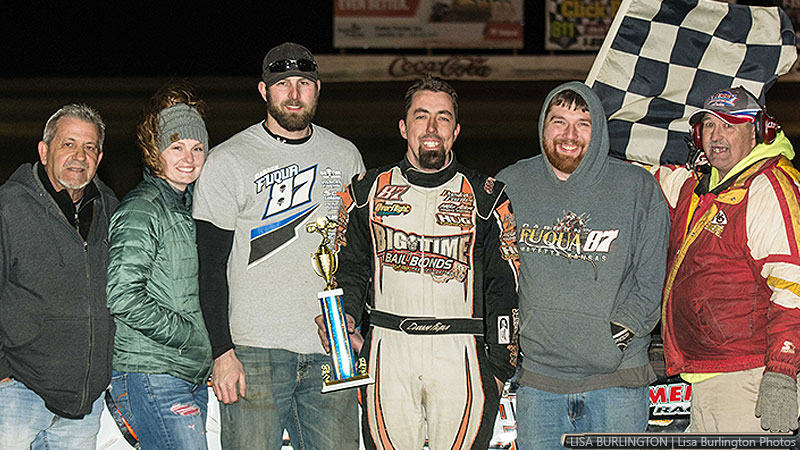 Darron Fuqua won the USRA Modified feature on Tompkins Industries Night at the I-35 Speedway.

The temperature may have been a bit lower than normal Saturday night, but the racing was hot as usual at I-35 Speedway.

The Out-Pace USRA B-Mods rolled out on the track, with Danan Knott on the poll. Knott, who had been so close to capturing his first career Out-Pace USRA B-Mod victory in the past, was in hopes of breaking into the win column. With Blake Pierce to his outside, Knott didn’t wast anytime moving to the lead, as Pierce drifted high off of turn two, with Tyler Cadwallader, Ty Griffith, Nic Hanes, Taylor Skauge, and last week’s feature winner, Shadren Turner all battling for the win. Dakota Foster started inside row ten, but was winding his way quickly through the pack toward the front, as was Chase Galvin, who started just in front of Foster. Skauge was side-by-side with Knott, but Knott managed to race into victory lane, scoring his first career B-Mod win with Skauge, Turner, Foster, Pierce, and Galvan rounding out the top six finishers.

Tim Shields started on the pole with Austin O’Neal on the front row for the American Racer USRa Stock Car feature. In row two, Thomas Ground, and Gerald Wahwahsuck lined up, with Jaylen Wettengel, and last week’s feature winner, and 2018 I-35 Track Champion, Jeff Dixon in row three. Everyone was hungry for the win at the drop of the green flag. Shields raced to the lead early, running up front for several laps, when he suddenly slipped up high out of turn two racing on the cushion. He slowed, losing grip on the track. The field raced by, as Wettengel and Wahwahsuck dueled for the lead. Wahwahsuck drifted out of the groove. Dixon raced up to the front, taking the lead and the win, his second in a row. Shields finished second, with Wettengel, Aaron Sauter, and Nick Whalen finishing out the top five.

When Dennis Elliott starts on the pole, USRA Modified drivers know they will have their work cut out for them to get to victory lane. Robbie Reed started next to Elliott. As the green flag flew, the race was on between the pair. Elliot ran low, Reed on the high side. In close pursuit in third, USRA 2018 Champion Darron Fuqua was trying to find a way around Reed and Elliott. Just after the halfway point of the feature, Reed ran low going into turn one, spooning his way inside Elliott. Unable to hold the speed, the pair drifted high into the apex of turn one, with Elliot running out of ground, sliding off the turn two berm. Elliott kept his foot in the gas, racing back, but finding himself in fourth. Fuqua, seeing his chance, raced inside and took the lead. Fuqua held off Reed for the victory, with Paden Phillips, Dennis Elliott, and Austin Johnson rounding out the top five finishers.

Next Saturday, I-35 Speedway will host Rod End Supply Night with a special visit from the Midwest Lightning Sprint Car Series.